Save
Beyond the Viral Images: Inside MVRDV’s Tianjin Binhai Library with #donotsettle
Share
Or
Copy

#donotsettle is an online video project created by Wahyu Pratomo and Kris Provoost about architecture and the way it is perceived by users. They visit buildings, make videos and write extended stories in their exclusive column on ArchDaily, #donotsettle Extra.

Yes, that library. The images of the Tianjin Binhai Library have appeared everywhere, from architecture blogs and news broadcasts to going completely viral on social media. We had to go see it and show you what the space is really like. So, we teamed up with MVRDV who sent us to Tianjin to see it up close.

Tianjin Binhai Library, designed by MVRDV, is part of the bigger master plan for the new Binhai Cultural Center (masterplanned by Germany’s GMP). The building has seen phenomenal success on social media reaching all corners of the world. Since the opening, the number of visitors has been constantly increasing, with many of them coming from way beyond Tianjin. It is a library as destination point, redefined. 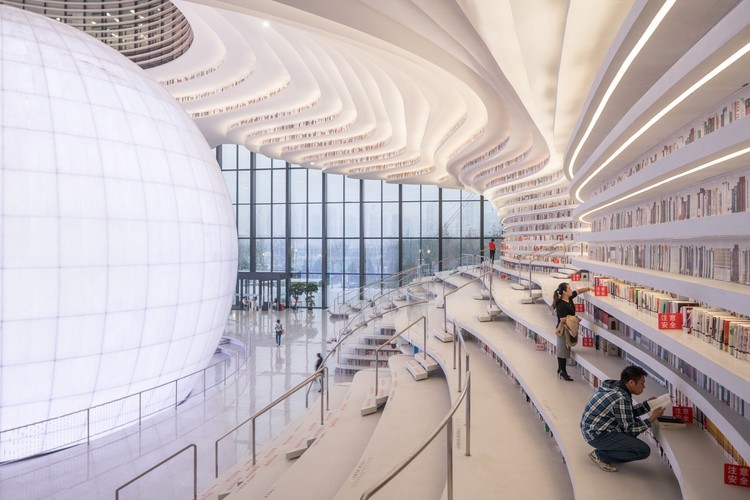 From sunrise to sunset, there was never an empty moment. Visitors line up at the entrance doors, eagerly waiting for their peek inside. With their smartphones in hand, visitors come through the doors with joyful reactions—it almost feels like Disneyland. This enthusiasm has definitely brought a soul to the building. The fact that the library is located 50 kilometers away from downtown Tianjin, in an area still largely in development, makes it even more fascinating. We met visitors that came all the way from Beijing (over 150 kilometers away from Tianjin Binhai) or even other Chinese cities to come see this building with their own eyes. This MVRDV-designed library simply cannot be seen as “just” a library anymore. It is an attraction, a public space, and a tourist destination. Is this perhaps the first of its kind?

Now, let’s dive into the waves of books. The building consists of two different parts: First off is the main atrium, the eye-catching space, where the social activity takes place; we called it “The Cave.” Second is the collection of reading rooms and supportive functions surrounding and directly connected to The Cave. Thanks to these spaces, this is largely a traditional library in a sense.

A Sea Of Books

When entering, the obvious attention-seekers are the endless flowing bookshelves. The space itself is hard to define. Stairs flow into walls which turn flawlessly into the ceiling. The strict delineations between floor, wall, and ceiling disappear. It is, first and foremost, an informal space, which stands in strong contrast to other more traditional libraries. People are spread out over the entire area, making their own investigation of the space they only saw in photos beforehand and capturing abundant photos of their own of every nook and cranny, as well as of themselves. The bookshelves and platforms offer an ideal place to take a rest, reminisce, and observe fellow visitors. With guards doing overtime on stopping kids from crawling up the stairs, we flow through the space observing people having a great time. Speaking to the library director, he is proud to have this already-famous building to manage. He shows us his favorite spots and even after a few weeks of opening we see him snapping some more pictures, adding to his probably extensive photo library. On the weekend, he notes, the line outside the building measures 200 meters long. Who said libraries, and books in general, are boring?

Sunlight is a crucial element in the design. It is admitted through an opening above the sphere and large transparent surfaces on the east and west of the building. The central sunlight corridor gives a dramatic eclipse effect due to the spherical shape of the auditorium, while the east-west openings give the building a connection to the park and patio respectively.

Meanwhile, a traditional library is present in the other parts of the building. Reading rooms are varied according to the needs and requirements (including audio-visual rooms, IT rooms, a kids’ library, and magazine reading rooms among others). The rooms are off-centered away from the large atrium and sphere, without losing that important connection. On the lower floors, the rooms offer a direct link, pinching into the omnipresent stairs. On the upper floors there is a visual link through the skylight, which gives interesting vantage points and glimpses back into the main atrium space.

The sphere in the center of The Cave feels spatially integrated into the wave-like form of the stairs and ceiling. The white surface of the ball is filled with LEDs, which project different imagery and motion graphics in all directions. Inside, there is a spherical auditorium giving interesting sound effects due to its shape.

Currently, the upper bookshelves in the main atrium are inaccessible, due to strict local fire regulation. Visitors may be disappointed by the printed books on perforated aluminum plates on the upper shelves, but after they start to appreciate the space and the impact on their own personal emotions, they do forget about it. Not all visitors come for books. When asking visitors for their opinions on this library, the printed books were never among their concerns. The social happiness overtakes any discomfort. Perhaps, the next typology of library will not require any physical books?

Many architects have taken their shot at redefining the library typology. No doubt libraries will evolve tremendously over the coming decades, moving more towards digital content. Should libraries play an important part in creating social interactions and create awareness of the benefits of reading? Do you think the Tianjin Binhai Library could represent the library of the future? 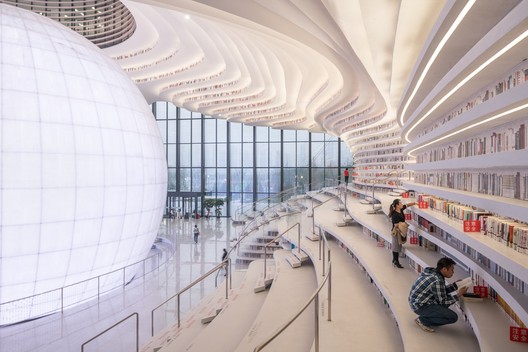