Nine visionary projects focused on living within the relatively unexplored terrains of sea and space have been selected as winners of the 2017 Jacques Rougerie international architecture competition.

Established in 2011, the competition aims to foster the creativity of young architects by challenging them to complete “innovative, audacious and promising projects” that imagine new methods of sustainable development within the realms of sea and space.

Check out the winning projects below. 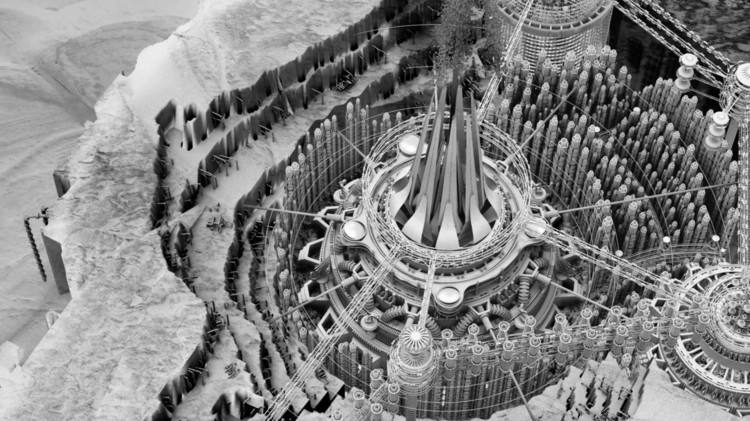 Innovation and Architecture for the Sea

With “blue as the new green” as its design philosophy, Currents for Currents is a housing solution to both the vulnerability of coastal communities to harsh natural calamities, and the lack of reliable power infrastructure in these far-flung areas. With resilience as one of the primary concerns, the structures were designed with as much flexibility as possible to adapt to the sea’s ever-changing conditions The heart of the project, however, lies in the way it has been designed to use their unique at-sea context to their operational advantage. The houses are powered by both tidal and solar energy harvested by technology incorporated within the units themselves, thus rendering the entire community to be completely off-the-grid and self-sufficient.

Focus Award: “Ports of the Future”

Inspired by professor Donald Sadoway’s notion of giant container sized liquid metal battery, Ephemere Highrise proposes the idea of a floating power station and liquid metal battery charging station. The team of professor Sadoway – Ambri aims to develop a giant battery that fits in a 40-foot shipping container for placement in the field. And this has a nameplate capacity of two megawatt-hours. That’s enough energy to meet the daily electrical needs of 200 households.

The Frioul archipelago is located in the Calanques National Park. It marks the geographical epicentre of Marseille, the global capital of the submarine life. The fragile ecosystem of this island chain is exposed to numerous risks – various wastes, eradication of Posidonia meadows, coastal erosion, pollution… BIOLUM_REEF F is a biomimetic response having a triple objective: 1/ promote the development of marine biodiversity via an artificial reef. 2/ create three semi-submerged and autonomous habitats within the reef. 3/ propose an “energy-free” and depolluting ecovirtuous cycle, in which wastes = resources.

Innovation and Architecture for Space

Born at the advent of the worlds first post-human industry of asteroid mining, sat proudly upon the surface of the Rosetta Asteroid located in the depths of a magnificent asteroid crater at the foot of the 1,700-meter high Putoran Mountains lies Platinum City! A pop up industrial city that embodies bio-mechanical characters within its urban fabric, Platinum City exists somewhere between a pristinely manicured garden and a well-oiled machine.

Platinum city is an industrial platinum mining outpost in outer space on the surface of the Ore grade A Rosetta asteroid in high lunar orbit around our moon. The worlds first self-sufficient post-human space colony is a city fathomed as an organic computer, with its grandiose, drone crafted asteroid regolith architectures engorged on wet technologies grown over time and anchored to the platinum rich Rosetta Asteroid by a vast network of biomechanical tendril like roots.

My project aims to explore an informed strategy that uses Martian environmental constraints for the development of a flourishing scientific society. All the elements for the production of construction materials can be found in the planet’s soil and air. The main challenge therefore is the production of energy. It is said that Mars is a frozen planet, with temperatures reaching down to 120°C. While this is true, it is a view that sees the glass as half empty. At the right place and the right time, Mars can be clement, with temperatures reaching up to 30°C. A nomadic strategy, consisting in following the cyclical course of the sun during the year, takes advantage of the seasons on Mars to maximize solar exposition and leading to an average annual temperature of 16,4°C and a solar energy efficiency of 557 W/m2.

Inspired by the algae photobioreactors functioning in France, in the United States, or on the facade of the algae house in Hamburg, we’ve designed a solar power station that uses eukaryotic microalgae to produce electrical energy, oxygen and hydrogen. Launched from a rocket, this bio-morphologic architecture opens up in space like a flower while reaching its orbit.

This project proposes a utopian vision for a translated Tuvaluan archipelago in Auckland, New Zealand. Instead of replacing the atolls–whose futures, while threatened, remain uncertain–this alternative archipelago envisions an additional semi-autonomous network for Tuvaluan cultures and livelihoods to flourish.

Tofinu: living ‘on the path of the water’ on the Beninese coast / Kemi Amede, Don Do;  Benin, France, Australia

South Benin is a tropical wetland area, with bands of swamps, lagoons and land parallel to the coastline. In the early 19th century, human settlement was organized around traditional fishing villages with stilted houses on the lake. People lived organically in harmony with nature, structured by family, social hierarchy and religion. Generally, the sea was seen as a wilder place, and one would not build permanently near the coast.

The Tofinu project seeks to establish a starting grid or framework as a guide for the traditional forms and ways of living to re-establish, not as a rigid and permanent structure but as a starter culture that will weather and evolve over 100 years.

In a country flooded with salt water, Bangladeshis build a new ground by extracting salt from seawater, pervasive in most parts of the country. Able to reconfigure seawater desalination techniques (already used today in the middle east), they transform the brine (obtained through electrodialysis) into a construction material. The sodium chloride present in the water passes from a disordered liquid state to an ordered rigid material. Thereby, salt, once responsible for the biotic transformation of Bangladesh and the disappearance of good soil, is being used in the development of an artificial, hybrid nature of architectural elements and rocks salt. A new refuge ground takes shape above seawater, by agglomeration of crystalline salt.

Learn more about this year's winning projects, here, and check out the full database of entries past and present, here.