Just a few months after the opening of Apple’s first town square concept retail store, the Foster + Partners-designed glass-box structure is facing the wrath of its first Chicago winter – and it doesn’t appear to be handling it so smoothly.

As reported by the Verge and 9to5Mac, nearly all of the store’s riverfront outdoor space has been roped off due to the presence of large and potentially dangerous icicles that have formed on the edge of the building’s MacBook-shaped roof. Signs reading “watch for falling snow and ice” now surround the store and at the entrance on Pioneer Court.

Nick Leahy, a spokesman for Apple, said the issue stemmed from a technical malfunction in the roof’s heating system:

"The roof has a warming system that's built into it. It needed some fine-tuning and it got re-programmed today. It's hopefully a temporary problem."

Furthermore, photographs posted to a discussion forum at Skyscraperpage have revealed a crack that has formed in the pavilion’s structural laminated walls – an issue that could require the expensive replacement of an entire 32-foot-tall panel. 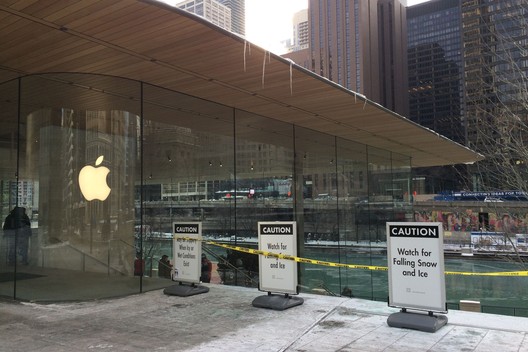