This article was originally published by Common Edge as "The Gehl Institute’s Toolkit for the Creation of Great Urban Spaces."

Jane Jacobs was arguably the most important “citizen” planner in the 20th century. If we were setting up a related category for credentialed planners, then the great Danish urbanist Jan Gehl might just top that list; inspired by the ideas of Jacobs, the architect and urban designer has spent nearly a half-century studying and writing about public space. He helped his home city of Copenhagen become a kind of model for walkable urbanism and has consulted for cities all over the world.

Two and a half years ago his firm, Gehl, launched a nonprofit arm, Gehl Institute, dedicated to public engagement, and the use and creation of public urban space as a tool of both economic development and political equity. Recently the institute published what it describes as “tools for measuring public space and public life, in the form of free, downloadable worksheets.” The toolkit is beautifully executed. Last week I talked to Shin-pei Tsay, executive director of the Gehl Institute, about the tools and what her group hopes to accomplish with them.

Martin C Pedersen: This is extremely well done. It’s accessible in both in content and visuals. Tell me about how the toolkit came to be, and some of the ideas behind it.

Shin-pei Tsay: The Gehl practice has been evolving these tools for years, in many cities, using them, and helping their clients to use them. There aren’t a lot of urban designers who are collecting data about people and public space, and we think that’s a fundamental first step. Design too often happens without that information. And even if designers want to use that information, trying to figure out how to gather it themselves is challenging. We wanted to combine those two things: the data and the ways to gather it.

There are tools in Jan’s book, How to Study Public Life, but because Gehl Institute’s mission is about making public life easy to adopt, we wanted to make it even easier for people to access. So that even if you weren’t trained in design, you could still better understand the potential. That’s why the language was something that we really worked on, and tried to make open and accessible. We removed a lot of jargon. And if there was jargon, or professional terms, we created a couple of animations to explain them. But it’s not just measuring. It’s using what you collect and applying it as part of a process to achieve something tangible in the public realm. As a result, the stories that we tell are important, because then people can clearly see that the information came from these specific tools, and it led to this decision. That was a missing piece of the story, allowing people to see the direct correlation between the measurement and an outcome.

MCP: You’ve used the word “measurement” a few times. It cost money to measure. It requires expertise. You have to possess some grounding in the scientific method. How do we then make this part of people’s process in creating public space?

ST: That’s a very good question, and it’s what’s in front of us right now. There are a lot of cities that are using the tools. There was once a perception that the data was just impossible to collect and, therefore, policy could never mandate the use of it. What we’re saying with the toolkit is, the data is absolutely possible to capture. Yes, it requires some expertise, but that would be true of any set of collected data. If you think about transportation data, for example, those are mandated metrics about our streets that over the years have become part of practice, because there’s been a policy to collect it in order to receive funding. It would great over time to see something similar happen with some of our measurements.

MCP: And what would you ultimately like to see as an outcome?

ST: We would love to see development plans put people at the center in their consideration of the public realm. It’s easy to just forge ahead with a design “vision” and focus on the numbers and the amenities that might be attractive to prospective tenants, but that doesn’t get at the fundamentals of what people like to do in public space, and the behaviors they exhibit when a place feels safe and comfortable and beautiful.

ST: It is a combination of art and science. Having some methodology around it, some standards, so that there are comparables to other places, starts to get at the quantifiability of the metrics. It’s often about showing patterns. For example, the city of Seattle used the tools to evaluate a few pilot parklets throughout the city. There had been a preconceived notion that one parklet, which was placed on a street already supported by streetscape and plantings, would be the most popular, especially since this parklet was in a neighborhood that was increasing in income per capita. However, the comparison of this space with other parklets throughout the city showed that parklets in a neighborhood with fewer amenities, a lower per capita income, and greater ethnic diversity actually had much more diverse use. Combining the activity patterns with demographic information, for example, is much more insightful than guessing about amenities. Much of this is relative and contextual, but that doesn’t mean it’s not measurable.

MCP: If you could have an ideal audience for the tools, who would you want to really dig into these tools?

ST: I would say top of the list are city staff, who have to grapple with competing agendas, trade-offs and investments, where they should allocate resources, how they serve their entire city. I think these tools might help elucidate some of those priorities. I also think there’s potential in working with social impact organizations. Because the tools provide a way for neighborhoods to sort of own their own information, rather than being exploited for that information, and having it used by outside organizations to change the neighborhood, without their consent or participation.

MCP: I have an ongoing debate with my friend, the writer Alex Marshall, about why we can’t building walkable communities from scratch anymore. Alex thinks it’s mostly tied to accommodations that we make for cars. I think it’s essentially a problem of scale. That fine-grained urbanism that we love just doesn’t pencil out in large, brand new developments. What do you think?

ST: Both of you are framing the issue around a specific set of development metrics that are actually not human-centered. Transportation planning conventionally looks at vehicle throughput, and now more and more, pedestrian and bicycle throughput, but may not consider how streets are places where people can stay and linger.  Development planning is often driven by numerical requirements. Because both approaches rely on models to a certain extent, I feel like our tools start to make the human activities in a neighborhood much more visible. Perhaps one day public life data could be included in those planning models, especially since we are working to create standards for the metrics.

ST: Gehl Institute does not but the Gehl practice does consult with developers more and more frequently these days. The institute would be interested in talking to groups like the Urban Land Institute or other organizations that create guidelines for developers, so that we can start thinking about how to insert these ideas into practice on a broader scale.

MCP: Can these tools work at large scale? I ask this because I look at Hudson Yards in New York. The scale of those buildings is so big. What can you possibly do at the street level to make that a pleasant experience?

ST: The massing of the buildings is enormous; the setbacks are also quite challenging. It seems to me that it was designed with a lot of security considerations, so there are these very large, singular entrances that sort of funnel people into and out of them. The corners of those blocks and the edges are where the opportunities are, in terms of counterbalancing the gigantic, overwhelming aspects of those streets. You have to open them up, make them a bit more permeable. Even with the greenery, the edges are quite hard, too. It’s not the kind of place where you would feel free to wander. You can’t get close to the buildings, even when you’re in the middle of the block.

MCP: Well, you know you’re in trouble when the art folly is 14-stories high. 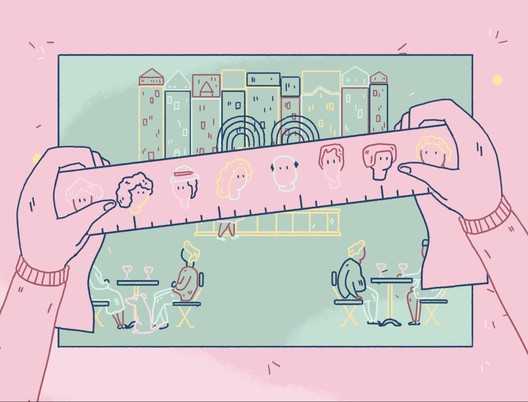