Bee Breeders have announced the winners of the Construction Container Facelift architecture competition. The competition jury received a wide range of work, but selected proposals which were based on a realistic implementation of a novel solution, maintaining the inherent durability and functionality of the shipping containers versus altering them strictly for aesthetics.

Saule Technologies in Poland submitted Construction Container Integrated Photovoltaics which took a modern approach along with a high-tech solution to improve both function and aesthetics of the containers. The exterior design is ink-jet printed solar cells, allowing the designs to harvest solar energy and be stored within the portable battery stations.

The new conceived technology would enable a custom-made design to wrap up construction containers in an ornamented envelop, creating a pleasant addition to the cityscape while at the same time generating electricity.

The second place winners, Cuhaci & Peterson tackle creating a blend of nature in a ‘concrete and steel jungle’. The jury selected the project for its state of the art technology, producing a simple and environmentally-friendly solution.

Working in several stages, detachable panels and planter boxes are attached to the containers, allowing seedlings compatible with the site’s growth zone to flourish, and allow the inclusion of a green element to a usually stark construction site.

Ludovic Marx of Austria created A Container Surprise takes into consideration the contrast between day and night uses. During daylight, the containers appear ‘invisible’ clad completely in one-way mirrors. At night, placed between the container face and the one-way mirrors, there are various light features which illuminate. Different types of lighting effects support various programs, such as public art for cultural events, billboards for advertising, or bold neon to compliment street markets and pop-ups.

This would create a place for either artistic light illustrations, or even advertising; offering both a creative and commercial solution to reimagining the containers aesthetic. 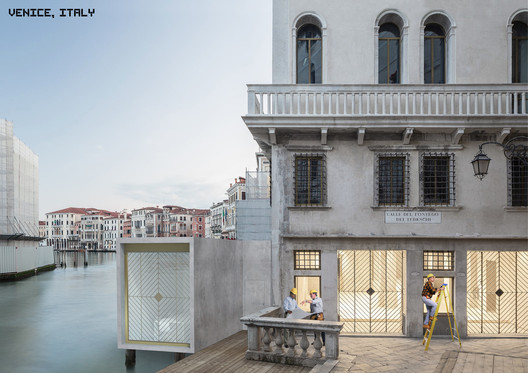