This article was originally published by Amar Singh on Medium titled "You're working in the wrong place."

At my most recent job, I did all of my best work at home. I would actively try to avoid the office for as long as possible. At home, I had two desks and complete control over my environment. Distractions and breaks were choices.

Once I went into the office, the environment changed. There were constant distractions, from other employees, dogs barking (for the record: puppers were a net positive), impromptu meetings and birthday celebrations. It was very difficult to get into flow states and incredibly easy to be broken from them. Of all the places I could work, my desk at the office was often the worst option.

When I’m in a crowded space my thoughts also get crowded. I feel overwhelmed by stimuli and the inability to escape them. In contrast, when I have space (mental & physical), I’m able to challenge and understand both my thoughts and assumptions. The quality of my thinking goes up significantly.

I realized I kind of hated open offices.

The Rise of the Open Office

We encourage people to stay out in the open because we believe in serendipity—and people walking by each other teaching new things.
(Jack Dorsey — pg. 49, Deep Work)

It sounds great in theory. Have an office with everyone in one room you’ll get more synergy than you can dynamically optimize. Marketing and Design will work side by side on skunkworks projects, Engineering and Product can knock out questions and bugs immediately, and communication will flow through the organization naturally.

80 percent of all offices now have an open floor plan. Traditional companies have moved towards open plans to inject some much-needed creativity and serendipity into their offices, just like the cool start-ups.

Before I continue, I would like to call out that I am part of the "problem" with open offices. I’m extroverted and when faced with the choice of diving into a deep, complex problem or shooting the sh*t with my coworkers, I too often choose the latter. I’m not alone in this.

Workers who are in open office environments suffer by almost every measure. One study of an Oil & Gas company in 1997 showed that:

The psychologists assessed the employees’ satisfaction with their surroundings, as well as their stress level, job performance, and interpersonal relationships before the transition, four weeks after the transition, and, finally, six months afterward. The employees suffered according to every measure: the new space was disruptive, stressful, and cumbersome, and, instead of feeling closer, coworkers felt distant, dissatisfied, and resentful. Productivity fell.

Although prior researchers have claimed shared work spaces can improve social support, communication and cooperation, our results indicated that co-worker friendships are of the lowest quality in hot-desking and open-plan arrangements, when compared to those with their own offices or who share offices with just one or two others.

The addition of noise inevitable to the open offices was seen as a large obstacle to productive focus. Physical barriers also instill a sense of privacy—and a sense of privacy at the office has been shown to boost job performance.

Busyness as a Proxy for Productivity*

Open concept offices also give workers the knowledge that they are constantly being watched, whether passively or actively. It encourages us to look busy and productive.

We look busier, but we’re less efficient, take more sick days and our communication and happiness suffers. It’s not a smart trade-off.

We should strive to create better environments for meaningful work. There are numerous concepts proposed, my favorites include:

Potentially the best of both worlds. Hub and Spoke spaces feature a singular entryway into common spaces and hallways that spoke out to different individual offices.

People have the ability to choose to collaborate or to ensconce themselves in their offices. Hub and Spoke spaces have large, central spaces and hallways that need to be navigated that encourage conversation.

M.I.T.’s Building 20 is a famous example of the Hub and Spoke approach. Building 20 was famed for the amount of innovation facilitated within its walls. Some of this has been attributed to the unique structure of the building. The hallways and staircases were the sites of creative collisions, not people sitting with three feet of each other.

Eudamonia is the Greek concept for “a state in which you’re achieving your full human potential.” I learned of the Eudamonia Machine (a brainchild of David Dewane’s) from Cal Newport’s Deep Work.

In the Eudamonia Machine, there are five spaces that get progressively more focused on concentrated, focused work:

The first room when you enter when coming off the street is called the gallery. In Dewane’s plan, this room would contain examples of deep work produced in the building. It’s meant to inspire users of the machine, creating a ‘culture of healthy stress and peer pressure.

The salon is designed to create a mood that ‘hovers between intense curiosity and argumentation.’ This is a place to debate, ‘brood,’ and in general work through the ideas that you’ll develop deeper in the machine.

Beyond the salon you enter the library. This room stores a permanent record of all work produced in the machine, as well as the books and other resources used in this previous work.

The next room is the office space. It contains a standard conference room with a whiteboard and some cubicles with desks. ‘The office,’ Dewane explains, ‘is for low-intensity activity.’

This brings us to the final room of the machine, a collection of what Dewane calls ‘deep work chambers.’ Each chamber is conceived to be six by ten feet and protected by thick soundproof walls... ‘the purpose of the deep work chamber is to allow for total focus and uninterrupted work flow.’

A more in-depth exploration of the Eudamonia Machine. I’m a big fan of the concept, although the branding could be a bit more accessible.

Perhaps you work at a dogmatic start-up or your situation won’t allow you to make any significant adjustments to your work space or structure. Not being in control of your environment will make it harder to get work done.

You still need to get work done.

Find your equivalent of the Writer’s Cabin. Figure out a place where you can do serious, uninterrupted work. It can be a coffee shop, library or laundry room in the back of your house. Your ‘cabin’ is your space in which you get work done.

Audit yourself and figure out how when you’re most efficient and reaching flow states. Audits are helpful, because we often do things that seem logical, but are actually counterproductive. Looking at the outcomes is a worthy investment of your time.

Do you get your best work done while in an open office? 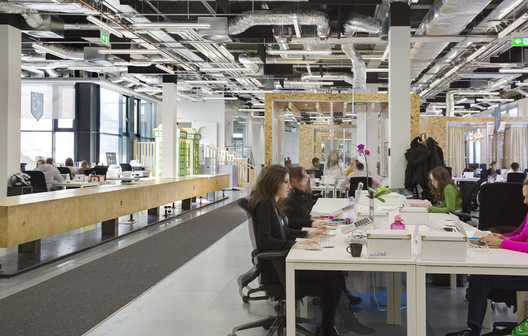