Terrence Zhang has been named the winner of the 2017 Arcaid Images Architectural Photographer of the Year Award for his "striking image" of the Swimming Pool at the New Campus of Tianjin University in China, designed Atelier Li Xinggang. Announced on the final day of the World Architecture Festival (WAF) in Berlin, the image was lauded for its ability to capture the shafts of sunlight entering through the clerestory and interacting with the water.

"The image is framed beautifully by the curved ceiling arches of the structure’s roof," commented WAF.

Zhang will be presented with a $3,000 prize at the 'Building Images' exhibition at Sto Werkstatt, London in February, where all of the shortlisted images will be displayed.

Arcaid Images has revealed the shortlist of 20 images in the running for the title of World's Best Building Image in their 2017 Arcaid Images Architectural Photography Awards. The annual award selects photographs in four categories - Exterior, Interior, Sense of Place, and Building in Use - which are judged by an esteemed panel of designers, photographers and journalists based on their atmospheric quality, composition, use of scale and more. 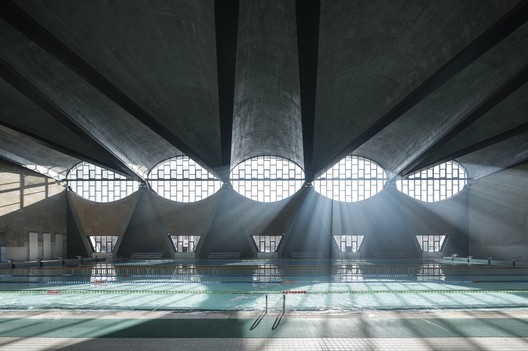