In addition to their videos, #donotsettle’s Wahyu Pratomo and Kris Provoost tell extended stories about the buildings they visit through an exclusive column on ArchDaily: #donotsettle Extra. In this installment, the duo brings you to the newest design by OMA, Rijnstraat 8 in The Hague, The Netherlands. Saskia Simon and Kees van Casteren from OMA explained the architecture of Rijnstraat 8 to #donotsettle while touring the building.

This project, which houses a variety of Dutch government agencies, is an example of a spatial alteration that occurred as result of political and organizational changes. However, given the existing structure by architect Jan Hoogstad, OMA has transformed the architectural experience of the building from within. 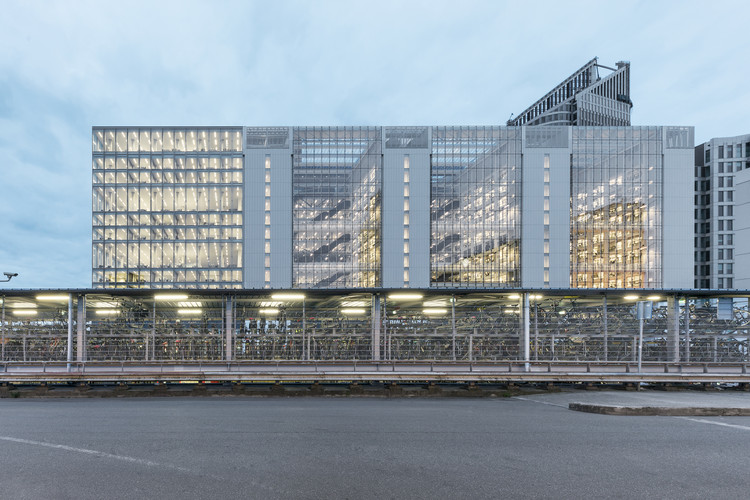 Since the perceived volume and figure of the building have not changed from the original design, thousands of people who pass by this area might not notice the newness of the building. The significant public intervention in the project is a wide passage on the ground level that connects The Hague Central station and the city center—a passage which can sometimes create a wind tunnel effect as you walk through. But as a space for moving through, this corridor tries to generate a relationship between the pedestrian and the building, including some commercial functions and landscaping, without infringing on the need for speed and ease of movement when you are running for your train.

The new ground floor, which interacts with many public activities (tram, shops, passage, and entrance), is now double-height and has increased transparency. People are moving freely, and that makes the building seem to float. On the top of the ground floor plaza, the bright yellow interior elevator sneaks out and now becomes an instagrammable object. Unfortunately, that is the limit of what people can see without permission to enter the building. But thanks to OMA's guided tour, we had a chance to appreciate the interior of one of the most secure buildings in The Netherlands.

By looking at how the building is tectonically formed, we could easily understand the segmentation of the building’s spaces. Atriums, workspaces and meeting areas are defined from outside by voids, solids, and the “black box” respectively.

This logic of room divisions is also clearly read from inside. The central spine that connects all segments of the building gives us a series of surprises as we move from East to West. This is due to the six different atriums that become the building’s main attraction. On the north side, these atriums are interior, and on the south side, the atriums are exterior. Each is distinguished by a different theme, design, and view towards the city, which at the same time helps us to orient ourselves inside the building. What separates Rijnstraat 8 from other office towers is the existence of these so-called spaces-in-between: not outside, not inside.

In addition to atriums, new modish staircases are embedded to offer more options to move vertically between floors, in places where this was not possible before. They are meant to be added as shortcuts, even though they have become the new favorite circulation option for employees because they not only look fashionable, but also offer impressive atrium views.

As a formal office building, Rijnstraat 8 has broken the paradigm of traditional office space by providing multiple double-height spaces, flexible working areas, chatting zones and funky meeting rooms. Unlike the facade, the model of the rooms inside is diverse, which is important for such a massive building. It simply creates enough reason to stay longer, be productive and get away from work boredom.

Interestingly, by ripping off the cladding of the existing structure, some spaces are reclaimed and added to the original layout. As a result, some columns might seem misplaced, as they fall in the middle of the hallway. Nevertheless, this does not feel wrong, because there is enough clarity—that’s why we think the design is excellent. This also shows that the project is not merely about re-polishing the interior, but rather recreating the space.

Clarity, transparency, and openness are keywords that many people agree on regarding what’s special about Rijnstraat 8. But let’s not forget that this is the building where important people in the national ministries are meeting, and is therefore highly secure. Combining these two sides is not as simple as we might think. Most other government buildings are closed and covered with thick solid walls. But Rijnstraat 8 has succeeded in providing both security and exposure simultaneously.

Thank you OMA for the tour! 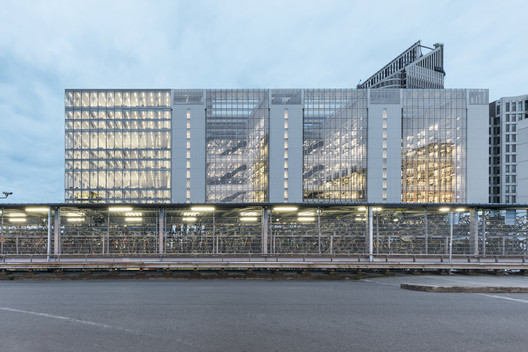