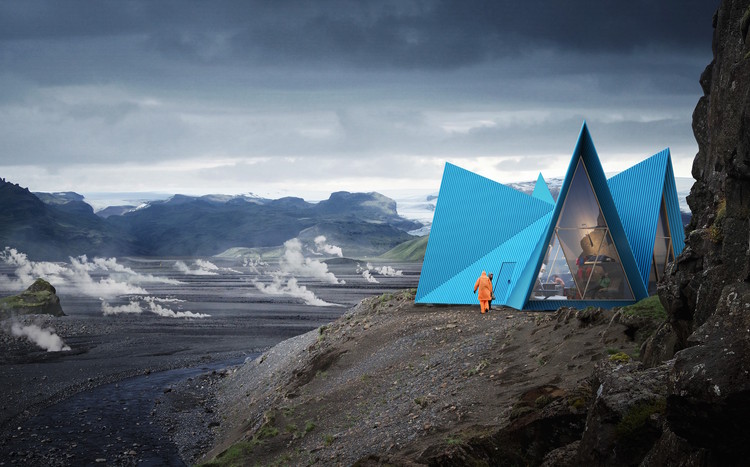 Skýli means “shelter” in Icelandic, and the cabin’s image takes cues from its surroundings. The outer shell of the cabins is painted a bright blue, giving the shelter a strong personality characteristic of the colorful housing found in the streets of Reykjavik. Additionally, the repeated triangular gable form making up the structure takes inspiration from the traditional roof shape of Icelandic cabins or huts. The Skýli will be conspicuous against any landscape, making it easy to locate and a notable symbol of shelter and safety.

The assembly process for the Skýli was composed to be quick and efficient. A system of plinths is first arranged and adjusted on the ground to create a level and stable foundation. Plinths increase the flexibility of the Skýli to be constructed virtually anywhere while additionally, diminishing the building’s footprint onto nature.

The structure itself consists of an inner and outer shell. The inner shell is constructed solely of cross-laminated timber, chosen for its durability, insulating properties, cost efficiency and sustainability. The outer shell, however, is steel—a material proven to withstand the harsh and unpredictable Icelandic climate—and is mounted onto a light steel frame.

The inner and outer shells, stud framed-walls, and windows are all prefabricated and packaged into a “kit of parts,” delivered to the site via helicopter. Assembly is estimated to take 2-3 days, and once finished, the status of supplies and facilities are routinely checked using IoT devices to ensure the condition and maintenance of each Skýli.

When fully constructed, two entries exist on the North and South facades to ensure at least one will always be better protected from the wind. The doors are placed on the exterior shell and are slanted inwards to automatically close, and keep closed, these outer doors. The spaces situated between the interior and exterior skins generates two spaces used to dry out laundry and house a compost toilet.

Inside, the intersecting triangular forms create four different spaces with separate functions: two for rest and sleep, one for cooking and recreation, and one for eating and storing emergency supplies. Large windows cover the ends of each of the space to reveal large, stunning apertures out looking the specular Icelandic scenery—so, even when indoors, there are clear visual connections with nature.

All furniture within the Skýli are custom-made to either fold up or fit in flat packs, easy for transport and assembly. Beds fold out from the walls, and all remaining wall-space is covered with hooks to hang gear and supplies.

Skýli were carefully designed to be self-sufficient and fully equipped and prepared for trekkers in emergency situations. Heating is generated by the people inhabiting the cabin and controlled by small, manually regulated vents installed throughout the four areas. A rainwater catchment system, additionally, filters water into self-draining containers within the outer shell to supply each cabin with water for washing, and once purified, cooking and drinking.

In regards to energy, the cabin uses a solar panel and battery to cover basic uses such as lighting and the charging of devices. In addition to this, when these sources are not enough, light and energy devices can be charged and used through cranking a man-powered generator. This generator can also be used to switch on and power a red alert lamp mounted on the roof in cases of extreme emergency.

The Skýli by Utopian Arkitekter has been shortlisted Leasure-Led Development-future projects award, along with AECOM, EFFEKT, and others, at the World Architecture Fair Awards occurring in Berlin from November 15-17. 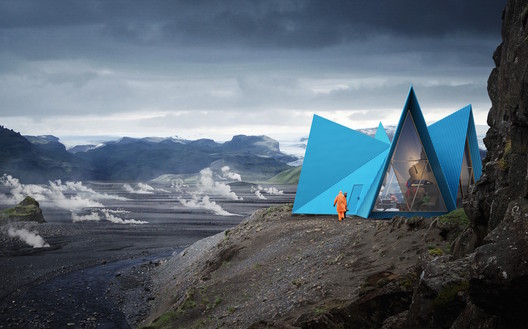