Utopia Arkitekter wants to start a discussion in Stockholm: how do we manage and develop our public spaces? The definition of the word public, according to the Oxford Dictionary, is something “open to or shared by all the people of an area or country.” However, as commercialism continues to rise, Utopia Arkitekter has a problem with our new applications of indoor “public” spaces. As architecture critic Rowan Moore writes in Why We Build, “Identity, desire and stimulation become things you have to buy, as clothes, restaurant meals of calculated diversity, and rides on the ski slope or up the Burj Khalifa.” The problem is that as our inner cities adopt more commercial indoor

The problem is that as our inner cities adopt more commercial indoor public spaces such as shopping malls, cafés or restaurants, the “public” is no longer represented by “all the people of an area,” simply due to economic restrictions. In a city like Stockholm, where darkness and temperatures below 10 degrees celsius prevail for 6 months of the year, the economic boundaries set up around indoor public spaces mean reduced opportunities for people to socialize outside of the home. Utopia Arkitekter’s proposal in response to this conundrum? An indoor park. 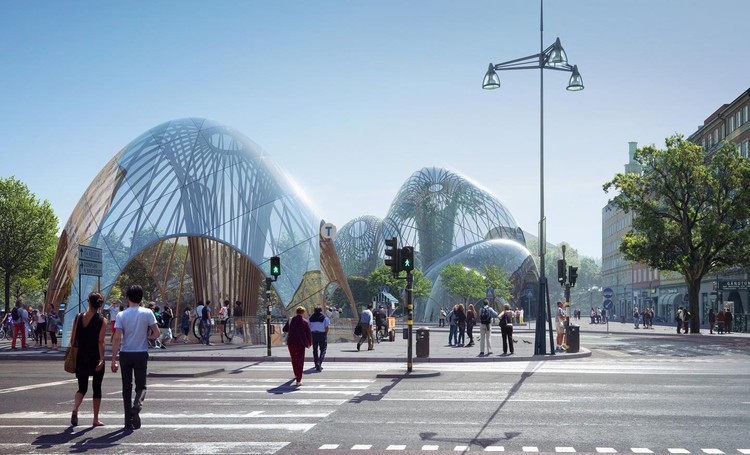 Stockholm already has a plan in place for evolving as a “grön promenadstad”—roughly translated, a green pedestrian city. A capital city for everyone. Utopia Arkitekter sees this as an indicator that the city is searching for more ways to engage the public in a non-commercial manner. Their proposed indoor park would be a 23-meter-tall construction, reaching the height of the eaves on surrounding buildings, spanned over an area of 1,500 square meters. It would be supported by a slender timber construction, and clad in glass vaults to achieve maximum transparency and maintain a rapport with the external context. This, along with the building’s large passages and entrances linked to existing pathways, would be the primary methods of integration, given that the building’s form itself—6 organic morphing vaults—has little correspondence with the existing architecture in the area.

Their chosen site, Sankt Eriksplan, is a small place that, despite being covered in grass, is not a very active public space, possibly due to a high curb surrounding the lawn. However it has a large degree of potential, being in a densely populated area and just across the street from an underground metro station, as well as a bus stop. On its east side is an existing outdoor park, Vasaparken, that is currently attracting locals, especially families. With a theater, galleries, museums and restaurants within a 5-minute walk from Sankt Eriksplan, there is also a range of cultural activity converging in the area. Utopia Arkitekter are hoping that the transparency of their proposed building will make it a more inviting space for passers by, than existing urban activities that may be tucked away in restored warehouses or hidden cafés.

The vaulted glass construction will also be “climate smart,” with highly energy efficient heating and cooling systems. How exactly the materials are sustainable is unspecified, although there is mention of resistance and recyclability. Utopia Arkitekter present the possibility of reusing excess heat emitted from the underground station and garage beneath Sankt Eriksplan to warm the park in colder months, again with little in the way of detailed explanation. This use of buzz words without providing detail might be concerning, however the fact that the firm is working in partnership with The Swedish Federation of Glazing Contractors and the Swedish Wood Building Council, experts in their respective fields, might go some way to address that concern.

Indoor gardens have also proven to be very successful public places, such as Gardens by the Bay in Singapore, although rarely are these achieved in a manner that is free from commerce. Sankt Eriksplan’s proposed indoor park is built upon the idea of being non-commercial and open to all, but Utopia Arkitekter also have plans in mind for “social enterprises” that could cover running management costs, such as renting out performance spaces for theater, art, outdoor cinema, musical performances or whatever else people come up with. Their goal to kick-start the conversation surrounding all-inclusive public areas, with their proposed solution being an elegant yet welcoming space, small yet bold, contemporary yet undoubtedly Nordic, is an engaging introduction to this important discussion.

As a proposal, Utopia Arkitekter’s building is exciting and, if realized, could certainly have the potential to become an icon of the area and the social values they stand for. However, much of the concept's success will hinge on its further development into a concrete plan, hopefully addressing what constitutes “climate smart,” and defining ways in which materials can be recycled and clear examples of how the building uses waste heat. If this idealized vision can become a reality and Utopia Arkitekter succeed in creating their indoor public park, there is no doubt in its potential to drive discussion and strengthen our shared-by-all public spaces. 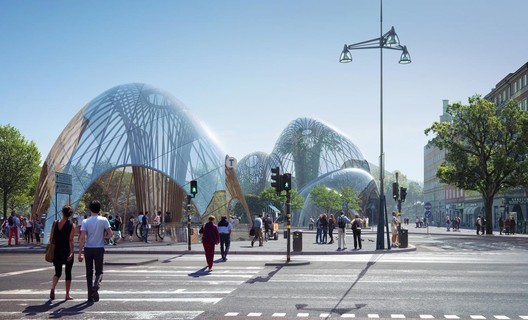