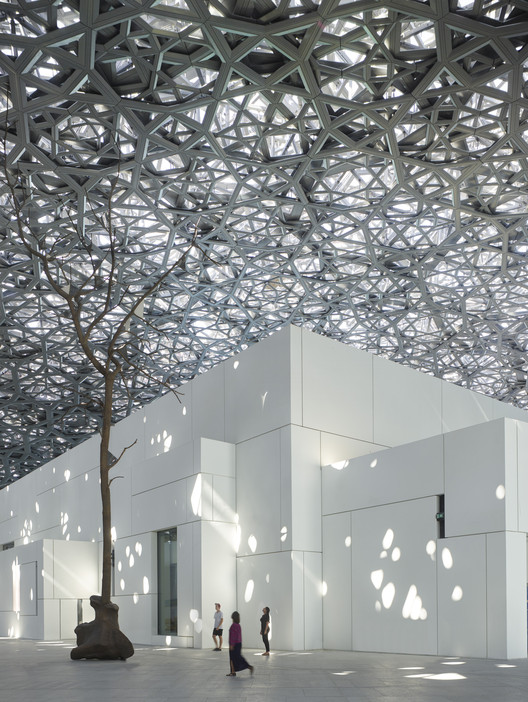 "It is rather unusual to find a built archipelago in the sea," Nouvel suggests. "It is even more uncommon to see that it is protected by a parasol creating a rain of light." The project was conceived as a "museum city (medina)," combining traditional Arabic inspiration with contemporary design and state of the art energy-efficient engineering.

The double dome—180 meters in diameter—comprises a "horizontal, perfectly radiating geometry; a randomly perforated woven material, providing shade punctuated by bursts of sun." Built from 7,850 unique metal stars, the structure creates a moving "rain of light" when the sun shines through. According to the architect, these are "reminiscent of the overlapping palm trees in the United Arab Emirate’s oases." He continues:

Louvre Abu Dhabi embodies an exceptional programme in the literal sense of the word. Its vocation is now to express what is universal throughout the ages. Its architecture makes it a place of convergence and correlation between the immense sky, the sea-horizon and the territory of the desert. Its dome and cupola imprint the space with the consciousness of time and of the moment through an evocative light of a spirituality that is its own.

All climates like exceptions. Warmer when it is cold. Cooler in the tropics. People do not resist thermal shock well. Nor do works of art. Such elementary observations have influenced Louvre Abu Dhabi. It wishes to create a welcoming world serenely combining light and shadow, reflection and calm. It wishes to belong to a country, to its history, to its geography without becoming a flat translation, the pleonasm that results in boredom and convention. It also aims at emphasising the fascination generated by rare encounters.

The Louvre Abu Dhabi represents the first universal museum in the Arab world. As an independent institution it will use the musée du Louvre’s name for the next thirty years.

21 Text description provided by the architects. All climates like exceptions. Warmer when it is cold. Cooler in the tropics. People do not resist thermal shock well. Nor do works of art. Such elementary observations have influenced the Louvre Abu Dhabi. It wishes to create a welcoming world serenely combining light and shadow, reflection and calm.

Earlier this week, the temporary sea wall that had been separating the Louvre Abu Dhabi from the seawater of the Persian Gulf was removed, creating a new harmony between site and structure as envisioned in the original project renderings. The building, which was conceived in 2007 and designed by Jean Nouvel, is set to open later this year.

The long-awaited Louvre Abu Dhabi, designed by Ateliers Jean Nouvel, is getting ready for a grand opening, with images showing the metal-domed building in the final stages of construction. Officially started in 2009, work on the museum is nearly complete, with a rumored opening date scheduled for this November.