Earlier this week, the temporary sea wall that had been separating the Louvre Abu Dhabi from the seawater of the Persian Gulf was removed, creating a new harmony between site and structure as envisioned in the original project renderings. The building, which was conceived in 2007 and designed by Jean Nouvel, is set to open later this year.

The museum sits on an artificial island that employed a hydraulic cutoff wall to remove water during construction, allowing for excavation, piling, and subsequent building to proceed with dry conditions. The recently completed saturation process can be seen in a time-lapse video above, in which adjacent waters rise slowly and systematically, allowing for the structure to be precisely framed by the seawater; an opposition of white stone and azure waters. According to Tourism Development & Investment Company (TDIC), the master developer of tourism, cultural, and residential construction in Abu Dhabi, which is also behind the museum project, the removal of the seawalls and subsequent site flooding took place in three stages.

“This is a great milestone in the development of Louvre Abu Dhabi,” said His Excellency Ali Majed Al Mansoori, Chairman of the Board at TDIC. “This delicate process is the result of months of planning and preparation to ensure that the inflow of seawater takes place in a controlled manner around and within strategic places in the museum. We are confident that once it is concluded future visitors to Saadiyat island will be able to see the beauty of Louvre Abu Dhabi and experience first-hand how the vision for this project has been turned into reality.” 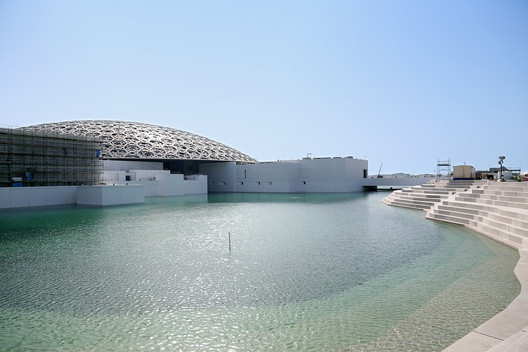