The Museum of Modern Art and MoMA P.S.1 have announced the five finalists of their 2018 Young Architects Program (YAP).

Now in it’s 18th year, the competition was founded to offer emerging architectural talent the opportunity to design a temporary, outdoor installation within the walls of the P.S.1 courtyard for MoMA’s annual summer “Warm-Up” series. Architects are challenged to develop creative designs that provide shade, seating and water, while working within guidelines that address environmental issues, including sustainability and recycling.

The five firms were selected following a nomination process that asked deans of architecture schools and editors of architectural publications to submit names of firms comprised of students, recent graduates, or established architects experimenting with new styles or techniques. Over 30 firms were considered for this year’s YAP.

A winner will be announced in early 2018.

Jenny Sabin Studio's "Lumen," winner of the Museum of Modern Art's 2017 Young Architects Program, has made its debut in the MoMA PS1 Courtyard in New York City, where it will play host to the 20th season of Warm Up, MoMA PS1 's pioneering outdoor music series. 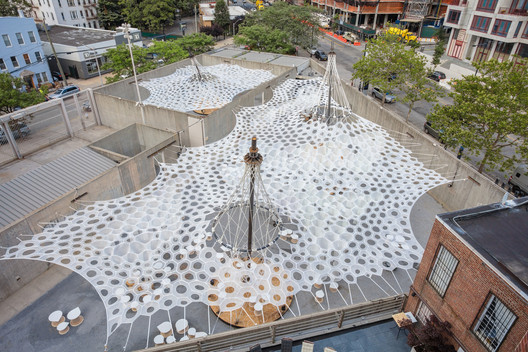