Update: We've added a 360 rendering of "Lumen" to the post, after the break (courtesy Jenny Sabin)!

Jenny Sabin Studio’s “Lumen,” winner of the Museum of Modern Art’s 2017 Young Architects Program, has made its debut in the MoMA PS1 Courtyard in New York City, where it will play host to the 20th season of Warm Up, MoMA PS1’s pioneering outdoor music series. Constructed from more than 1,000,000 yards of “digitally knitted and robotically woven fiber,” this year’s structure features 250 hanging tubular structures designed to capture and display the ever-changing color of sunlight over the course of the day. 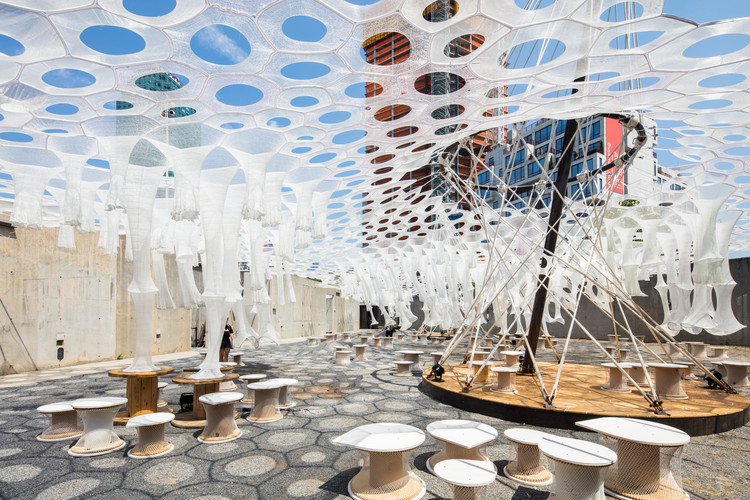 “Socially and environmentally responsive, Lumen’s adaptive architecture is inspired by collective levity, play, and interaction as the structure transforms throughout the day and night, responding to the density of bodies, heat, and sunlight,” explains MoMA PS1.

“The result of collaboration across disciplines, Lumen applies insights and theories from biology, materials science, mathematics, and engineering—integrating high-performing, formfitting, and adaptive materials into a structure where code, pattern, human interaction, environment, geometry, and matter operate together.”

Beneath the canopy, 100 robotically woven recycled spool stools and a motion-detecting misting system will allow visitors to relax and cool off out of the heat of the hot New York summer.

“Jenny Sabin's catalytic environment, Lumen, captured the jury's attention for imaginatively merging radical materials with unique spaces,” said Sean Anderson, Associate Curator in MoMA’s Department of Architecture and Design. “With innovative construction and design processes borne from a critical merging of technology and nature to precise attention to detail at every scale, Lumen will no doubt engage visitors from day to night in a series of graduated environments and experiences.”

"Now in its 18th iteration, this annual competition offered jointly by the Architecture and Design Department at MoMA and MoMA PS1 continues to take risks and encourage experimentation among architects," added Klaus Biesenbach, MoMA PS1 Director and MoMA Chief Curator at Large. "Jenny Sabin’s Lumen is a socially and environmentally responsive structure that spans practices and disciplines in its exploratory approach to new materials. Held in tension within the walls of MoMA PS1’s courtyard, Lumen turns visitors into participants who interact through its responsiveness to temperature, sunlight, and movement.”

The other finalists for the 2017 MoMA PS1 Young Architects Program were Bureau Spectacular (Jimenez Lai and Joanna Grant), Ania Jaworska, Office of III (Sean Canty, Ryan Golenberg, and Stephanie Lin), and SCHAUM/SHIEH (Rosalyne Shieh and Troy Schaum). An exhibition of all 5 proposals will be on display through the summer at The Museum of Modern Art.

Built by Andrés Jaque / Office for Political Innovation in Queens, United States with date 2015. Images by Miguel de Guzmán. More than 2 billion gallons of water circulate everyday beneath New York City. COSMO is a movable artifact, made out ... 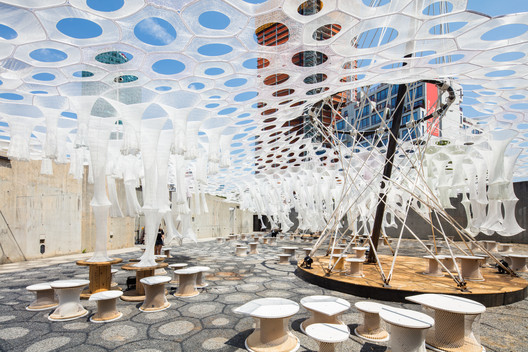