Passive School
To accommodate the merger of two primary schools the city of Knokke-Heist has developed an ambitious project: a so-called Passive School. The building has to comply with the highest environmental standards which should lead to a maximal consumption of 15 kWh per square meter for heating and cooling. A number of measures have been taken, some technical and some architectonic, to reach this goal. So besides triple glass, heavy duty insulation and the ‘Canadian Well’ for instance, the building features a ‘Volcano’ for night ventilation and a multifunctional porch to block the direct rays of the sun.

Heart
The new school consists of five functional clusters: a primary school and a nursery complemented by a refectory combined with after school daycare, a domain for the teachers and the administration and a multifunctional sports hall. By positioning this gymnastics hall in the center of the building it will play an active role in the daily life of the entire school. The hall as such can perform as square: a meeting place, a theatre, a room for ceremonies and festivals. The hall is a hub: it will form the connection between the different functions of the school.

Powers of Ten
Education is going through a process of individualization. The traditional ‘frontal’ use of a classroom with a teacher transmitting his knowledge in front of a group of listeners becomes less dominant. Education becomes interactive. Kids, more and more, work by themselves or in small groups. Fewer fixed working spaces are needed; more flexible arrangements become desirable. In that sense the number of ‘scale levels’ of a school building should be increased.

Gross = Net?
The Net is the effective space that the client desires, the Gross what actually has to be paid for. In today’s architecture the Gross / Net ratio is a decisive factor. Can we reclaim the Tare for Architecture? The aspiration is to make a building without corridors. Corridors are mono-functional conduits. Can we turn the traffic space into a more versatile biotope?

Cloister
The sports hall is enveloped by a kind of arcade that distributes the kids and visitors over the building. A thick wall absorbs the dressing rooms and storage space. But it also contains cavities for playing or studying that will hopefully further activate the hallway and increase the spectrum of study rooms. The wall opens up to reveal the activity inside and to create visual relationships between the different parts of the building.

Circuit
There are no dead ends. The circulation consists of a series of loops; connected circuits that generate a sense of continuity and endlessness.

Glow
The multifunctional hall requires a bigger height than the other rooms: it pops through the roof. Natural light will illuminate its interior: the heart of the building lights up.

Primary
The primary school consists of a series of classrooms that are placed around a rectangular enclosed ‘courtyard’. Wooden shelves (for hanging coats and displaying or storing school stuff) form an interface between the classrooms and this interior ‘square’. The classrooms become part of the larger whole; the children can also work outside the boundaries of their classrooms. A multiform block containing storage, installations and toilets is placed on the interior plaza creating niches: the corridor potentially becomes workspace. On top of this block and informal space emerges, an ‘attic’ or a ‘tent’. The stair doubles as a stand. The volcano shape helps to extract warmed up air to cool the building. Concrete ceilings throughout the school accumulate the chill over night and guarantee a refreshing start the day.

Nursery
The rooms for the nursery are grouped around a super wide corridor. This hall connects directly to the bubble shaped playground outside. The space is 5,4 meters wide and serves an extension of the classrooms; a collective space for learning or playing.

Flat
The spacious nature of the site creates a wonderful opportunity: the school can be organized in one single layer. In itself this can provide a blissful sense of extensiveness and openness, but moreover the horizontal character allows for every classroom to have direct access to the surrounding gardens.

Plat Pays
By sinking the building slightly into the ground the silhouette becomes extra friendly; the building will appear modest; the roof is almost within reach. Since the height difference between inside and outside equals the height of the school desks the windowsill potentially becomes workplace; it becomes a long additional table that can be used for studying, playing, as storage or as display. Three steps lead to double doors that open towards the garden.

Porch
The roof protrudes where necessary to prevent direct sunlight to enter. A porch comes into being, to hang out or for open-air working or studying; outdoor but covered.

Amoeba
The clusters for the primary school and the nursery school, the administration and other multifunctional spaces are all connected to the gym hall. As such a multiform building comes into being that embraces the outdoor space (and vice versa). These gardens have distinct functions and characters: kitchen garden, farm, park, playground, pitch, public square.

Green Roof
The volcano is topped with a layer of vegetation to enhance biodiversity and to create a natural appearance. large part of the roof is covered in pebbles. This surface is being used for rainwater collection. Perhaps counter-intuitively this grey roof turned out more sustainable than a green roof. 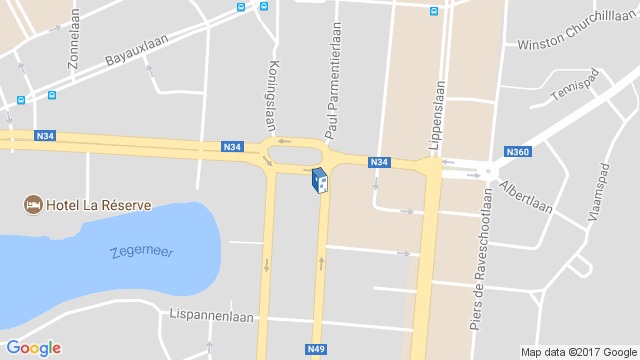 Location to be used only as a reference. It could indicate city/country but not exact address.
Share
Or
Copy
About this office
NL Architects
Office
•••
ABT België
Office
•••