Rem Koolhaas and Shohei Shigematsu, both partners at OMA, have been tapped to design the recently-announced expansion of the New Museum in New York. OMA will design a new building adjacent to SANAA's tiered-box museum. The project is expected to break ground in 2019 and will give the New Museum an additional 50,000 square feet (4,650 square meters) for "galleries, improved public circulation and flexible space for the institution’s continued exploration of new platforms and programs." This will be Koolhaas' first public building in New York. According to the New York Times, the New Museum—the only museum in New York City exclusively devoted to contemporary art—has already raised 50 percent of the cost.

Koolhaas showed his reverence for his future neighbors by commenting:

I’m particularly excited that our first public building in New York City will be for the New Museum, one of the most forward-thinking institutions for which I’ve always had a great affinity. Having collaborated with Kazuyo Sejima and Ryue Nishizawa on a number of projects in Europe, it is a real honor to stand alongside their great work of architecture, one of my favorites in the city.

I am honored to be awarded this project in the city perhaps most central to OMA’s philosophy, and am thrilled to work with an institution that deeply values the practices of creative forward-thinkers. As a Japanese architect, I am very happy to engage in a unique dialogue with SANAA and build alongside one of their seminal works.

Lisa Philips, a member of the New Museum board of trustees, said:

OMA is a great choice for our next building. Koolhaas has thought deeply about the identity and landscape of our city going back to his landmark book Delirious New York, published in 1978, a year after the Museum’s founding. Though he is one of the world’s finest architects with a deeply civic and public spirit, this will be his first public building in New York City.

New via OMA and The New York Times 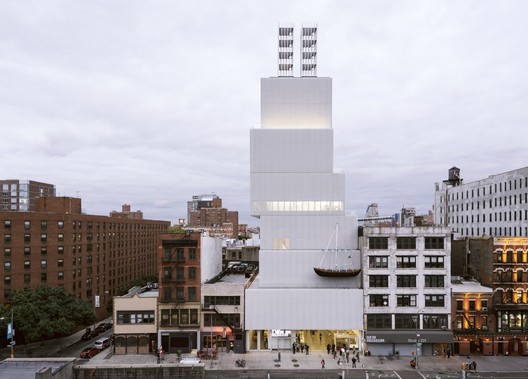