Save
10 Iconic Brutalist Buildings in Latin America
Share
Or
Copy

This article was originally published by KatariMag, a blog that explores the history of contemporary culture in its most sophisticated and fresh expression. Follow their Instagram and read more of their articles here.

Brutalist architecture responds to a specific moment in history. As WWII was coming to an end, a new form of State was rising from the ashes, along with a global order that would include and increase the relevance of peripheral nations. Brutalist architecture was born as a response to the ideas of the robust nations that would lead the masses. Critic Michael Lewis said, "brutalism is the vernacular expression of the welfare state."

This kind of architecture was committed to ethical principles and functioned as a new form of the Modernist Movement influenced by socialist ideals. Material honesty is a defining characteristic of the style, particularly exposed concrete, in fact, the term 'brutalism' comes from the French expression "beton brut", used widely by Le Corbusier. After the war, this great architect decided to immerse himself in social architecture, resulting in his iconic Unité d' Habitation, built in Marseille in 1947. The building is a true work of art, employing a Mondrian-esque combination of colors and an idea of modern life that includes gardens, shops, and a rooftop pool. This building, which marked the beginning of brutalism, comes across as delicate in comparison to its brutalist descendants.

During this moment in history, concrete was presented as a low-cost, unpretentious, utilitarian, democratic, and modern material with a great number of technical possibilities. Modern technology of the time allowed for it to be molded into a myriad of forms that responded to all kinds of structural fantasies. With this, architects in the mid-XX century conceived giant structures of raw concrete punctured by a poetic, sculptural, brutal and primitive rhythm.

Though it was the English critic Reyner Bahnam who coined the term and attempted to begin the trend in England, it has been proven that it was not until after its beginning at the hands of Le Corbusier that brutalism became a truly global phenomenon. Examples of this architectural style can be found from India and Georgia to Japan and the United States, and of course in Latin America, where it experienced its peak during the 60s and 70s and was still present though more scarcely in the 80s. It is interesting to note how brutalism aesthetically connects Latin America to the "Third World," as it is not a mere copy of a European style but rather an addition to a global movement. It is an example of peripheral nations taking on a leading role and attempting to take part in "development" and modernity. The following buildings are 10 examples of iconic brutalist works in Latin America.

This building harbors Argentina's National Library. The design competition was won by vanguardist Cloringo Testa in 1961, but was left unfinished until 1991 and, to this day, has yet to be completed exactly as the initial design proposed. The building is located in an ample site between Libertador Avenue and Las Heras Avenue, where Perón's Presidential Residence was located before its demolition by the military that overturned him. Architecturally, the most interesting aspect of the sculptural and poetic building is that its reading hall was placed on the top floor, providing visitors with views of the city and river, and the archives are located on the first floor.

Renowned architect Clorindo Testa also won the competition held by the now-extinct Bank of London and South America, for its venue in the financial district of Buenos Aires, between Recoleta and Bartolomé Mitra street. The structure of what is now the venue for the Banco Hipotecario S.A. has become a brutalist landmark, due to the innovative idea of mimicking the wide streets that surround it, uniting interior and exterior, as well as its exploration of concrete's artistic possibilities.

This building was designed by Emilio Duhart to function as the venue for the Economic Commission of Latin America. The architect and his team were directly inspired by the ideas of Le Corbusier, creating a horizontal structure held up by concrete columns. The central tower's façade is decorated with Pre-Columbian figures. The building is located near the Mapocho river, where some construction materials were extracted from, and at the time is was located on the outskirts of the city, though today it is immersed in a residential area.

This building was designed by architects José Montes Córdova and Raúl Minondo. It was commissioned by the Bank of Guatemala and built in the civic center of Guatemala City, a National Cultural Heritage area. Its most beautiful aspects are without a doubt the East and West façades that are decorated with Mayan figures, created by Guatemalan artists Dagoberto Vásquez Castañeda and Roberto González Goyri.

The Tribunal de Contas, located in the southern area of Sao Paulo, is an enormous building designed by the firm Aflalo y Gasperini and built between 1971 and 1976. The structure is held up by four large concrete columns, allowing free transit to the nearby Ibirapuera Park, The artistic liberty of the building contrasts with the lack of civic liberties that Brazil was going through at that moment due to the dictatorship.

This magnificent structure looks similar to a UFO and was built by Filgueiras Lima, a strong Brazilian proponent of the Modernist Movement, in the Administrative District of Salvador de Bahía. The building offers exhibition halls and amphitheaters.

Palmas 555 is located in Mexico City's Lomas de Chapultepec neighborhood and was one the Juan Sordo Madaleno's last buildings. The structure's ground floor is for commercial use and the following nine floors are offices. The irregularity between levels makes it unique. It is a beautiful large-scale sculpture.

The Jenaro Valverde building was built as an annex to the Social Security's Caja Costarricense building. Designed by Alberto Linner it is17 stories, and one of the tallest buildings in Costa Rica. The structure, as many of this style, attempted to "build the city" by including a public square, a fountain, gardens and commercial spaces, in a city that at this time lacked public space. To Linner's dismay, today the space is blocked off, the fountain is not functioning and his idea of public space is dead.

This building holds the Social Commerce Service's Cultural Center, which was designed on the site of an ancient oil barrel factory. Bo Bardi designed two concrete buildings united by bridges that stem from the brick factory building. It is a space that mixes sport, recreation, and culture, a landmark in the city constantly used by the residents of Pompeia.

This incredible brutalist building shows the connection between this style and the concept of a strong or even totalitarian State within a communist system (actually, one can find multiple examples of this architecture in many of the USSR's territories). This huge tower stands out in Havana's landscape and has become a symbol of the Soviet influence in Cuba. Construction began in 1978 and the building was completed in 1987, two years before the end of the USSR. Today it is the Russian embassy. It is situated in the coastal district of Miramar, where most embassies are located. 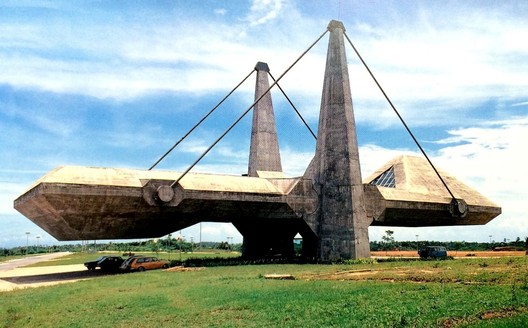