Soon you will be able to satisfy your wanderlust free from altitude sickness; on Wednesday October 4th, the Architecture Film Festival Rotterdam will see the world premiere of the documentary Cholet: The Work of Freddy Mamani. From director Isaac Niemand comes the story of Bolivia's unlikely architectural phenomenon, and one of ArchDaily’s 2015 leaders in architectural design and conceptualization.

Throughout the film, Moby’s discographic beats, along with the sounds of nature in Bolivia’s altiplano, subtly drown out everyday noise to elevate viewers to an alternate reality in El Alto, the highest city in the world. The film opens with carefully framed views of El Alto and a man’s voice speaking Aymaran, one of the endangered languages of central Andes’ indigenous people. Neimand uses quirky introductions against cut transitioning and rack focusing to center the viewers’ attention.

The more you know about El Alto before viewing this film, the easier it will be to completely transport yourself to the altiplano and grasp the significance of Mamani’s work within the context of its political, cultural, and economic climate. El Alto is a rapidly growing city overlooking Bolivia’s capital, La Paz. Historically, economic status in the two cities directly related to a person’s geographic elevation: the wealthiest residents lived in the valley below and El Alto was a deplorable slum high above. As struggling farmers and miners moved to El Alto, the dynamic began to change. Over time, El Alto’s identity became one of hard-working champions of free trade.

Identity is a key theme in the film. At first, Mamani is introduced not with respect to his status or architectural accomplishments but rather by his ancestry: he is Aymaran. Being Aymaran carries a sense of humbleness, and time and time again the film reminds us of Mamani’s simple lifestyle. As a child, he had to walk one hour to school. He drives a beat-up blue Toyota pickup truck. He wears dusty jeans, plaid button-ups, and ordinary sneakers. He eats a “regular alteňo lunch” at a restaurant with plastic chairs and tables that advertise Coca-Cola. And he has two sons. In one scene, Mamani shows his sons how to search for his works on Google and says to them, “All this is what we have built.”

Mamani’s work is inspired by his own culture and iconography, along with the culture of his perceived ancestors, the Tiwanaco peoples. When asked by a radio host what the relevance of his work is for the Aymara world, Mamani responds, “[My work] is a restoration [of] our values. A recovery of our identity.”

El Alto is primarily brick, with some surviving adobe mud construction. Now, out of this abundance of monotone brick matchboxes rise over 60 of Mamani’s Cholets, and many copies, acting as electric symbols of the energetic, nonstop city they occupy. Just like the city itself, Mamani’s work is described as rebellious and individualistic. In the film, Mamani explains to viewers the formula for his multi-use buildings: typically, shops inhabit the street level, above which are two floors of social event spaces, followed by two floors of rentable apartments, all crowned by the Cholet, where Mamani’s clients live.

Of course, Mamani does not escape criticism, and identity becomes a source of controversy in more ways than one. Gastón Gallardo, the Dean of Architecture at Mamani’s alma mater, Universidad Mayor de San Andrés (UMSA), interrupts the film to remind us that Mamani is not a certified architect, but rather a civil construction and civil engineering graduate. Gallardo calls Mamani’s work “more decoration than architecture,” and among other professionals interviewed in the film, he doesn’t believe Mamani’s work references Tiwanaco ancestry much at all. Meanwhile, Jedú Sagárnega, an anthropologist and archeologist at UMSA, insists that while the Aymaran people believe they are descended from Tiwanaco peoples, the two cultures are completely separate and unrelated.

The question of whether Mamani’s work truly derives from his ancestry remains unanswered. Regardless, Mamani has idiosyncratically transformed the face of an indigenous city. Niemand's documentary challenges us to think about what is considered true “architecture”—where does this validation come from? Mamani may not be a licensed architect, but the people of La Paz call Mamani's work, “Aymaran architecture,” and when people research Aymaran architecture, now and in the future, they will discover his creations. By telling Mamani’s story in between snapshots of Aymaran life—masks, music, fighting Cholitas in multi-layered Andean skirts, textiles, the open-air market, the Mi Teleférico system and more—Niemand presents the conclusion that Mamani’s work is integral to the Aymaran cultural identity. After hundreds of years, the Aymaran people of El Alto finally have an architectural style that reflects their spirit and in which they can take pride. 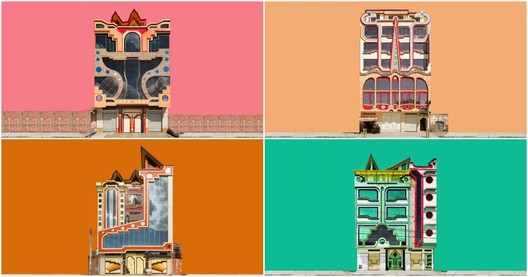