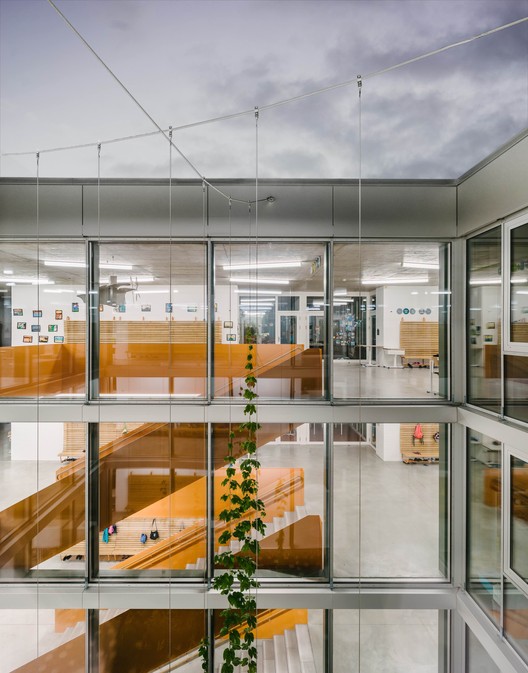 Text description provided by the architects. As a response to the considerable increase of its population, the community of Allschwil -a small town which develops without noticeable interruption at the border of the city of Basel- decided in 2011 to call for a competition for the construction of a school for 600 girls and boys. The place is characterized by its heterogeneity, with low- and medium-scale housing buildings, along with other education buildings and large commercial and infrastructure constructions.

Both the new searches from a pedagogical point of view, and the objective of leaving empty as much of the plot of land as possible, led us to propose two simple buildings: the school itself, which extends between the two streets that limit the plot, and a conspicuous building on the main street, where the most public uses are located. The resulting large exterior spaces guarantee the sought permeability and become a meeting place open to the whole community.

The two streets that limit the area have a difference in altitude of 1.80 m. This allowed us to organise the school into two parts, differentiating the area of the younger children from the one of the older ones. Between them, a programmatic and structural "bridge" offers a covered space for breaks on the ground floor, and common rooms on the upper floors (teachers, library, special rooms). Each sector is organised around a courtyard, which allows access of daylight in the areas of circulation. Thanks to that, they become additional places of study, with different degrees of intimacy, without a defined function. Thisextends their possibilities of use.

Each classroom has a room for group work. Between both spaces, a glazed wall and a shelf allow teachers and students to decide the degree of transparency desired by filling the shelf  more or less densely. The same happens with the transparent divisions between the classrooms and the circulation areas. In both cases we seek to encourage users' appropriation of such spaces.

The decision of raising the sports hall to the first floor liberated the ground floor for other uses like the auditorium, which acquires a very public character. Shortly after the inauguration, this space has ceased to be merely part of the school, becoming a very popular place, for political meetings, concerts, plays, and for activities that the community has imagined since the completion of the building.

Aluminium tubes define the last layer of the facade. In the school they serve as a parapet for the balcony that surrounds the entire building, as brise-soleil and as a filter between the outside and the inside for the classrooms. In the sports hall, they cover the opaque parts and conceal the circular windows. The continuity of the tubes, their expressive horizontality, the accent put on the differentiation of the different levels of the school: an abstraction as an answer to the question of how a public building of these dimensions can look like. In the school building, each parapet-element -six meters wide and in ten different colours- acts as a large pixel. The variations of light and shade change the appearance of the building constantly, encouraging an active perception. Four of the ten colours define the building of the sports hall, used in such a way that they accentuate the lack of main and secondary facades. 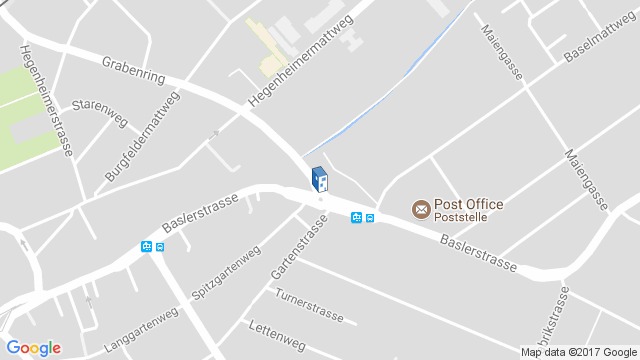