Save
9 of the World's Most Intrusive Buildings
Share
Or
Copy

In 2017, many of the world's cities have become potpourri time capsules of architecture. We live in an eclectic era in which a 19th-century industrial loft, post-war townhouse, and brand new high rise condominium are all comparably desirable properties. This increasingly varied urban landscape—and the appetite for variety of the people who live there—makes it more difficult than ever for new architecture to grab the public's attention.

To combat this, architects often attempt to produce an "iconic" work: a building whose design is so so striking that it attracts even a layperson's focus. Sometimes this ambition pays off as timeless, and sometimes it irreversibly pock-marks the skyline. What follows is a collection of attention grabbing structures. Will they be remembered as eccentric landmarks or glaring eyesores? You decide.

In and of itself, the Tour Montparnasse isn't a shocking structure. The 689-foot (210-meter)-tall modernist skyscraper is a dignified volume with attractive cladding and a tastefully curved facade. The problem, in the eyes of many Parisians, is that in the tower's neighborhood sits some of the world's most delicate baroque and classical architecture. In juxtaposition, the Tour Montparnasse resembles an obsidian monolith that dwarfs every structure remotely close to it. The tower's impact was so jarring that the city passed a ban on new construction over seven stories tall in Paris' city center.

432 Park Avenue's proportions alone are enough to earn it a place on this list. In what can be aptly described as a 1,400-foot (425-meter) toothpick resides a group of New York's wealthiest residents. Along with much of "Billionaires Row" south of Central Park, the occupancy of this Vinoly supertall is depressingly low. The penthouse of the jaw-dropping tower was recently listed for $95 million and includes a climate-controlled wine "cellar" that is actually higher than the roof of the Empire State Building.

Though IM Pei's striking Louvre Museum entrance was initially detested for its use of hyper-modern steel and glass in the face of what is arguably the most classically handsome art museum on the planet, Parisians eventually came around to the symmetrical structure. The pyramid is admittedly out of place in the center of the Louvre Courtyard, but its form and lighting tend to compliment the museum instead of fighting it. At night the structure resembles an illuminated fountain more than a modernist lantern.

Built in the shadow of the famous Space Needle on the grounds of the 1962 World's Fair, the Experience Music Project Museum (now renamed the Museum of Pop Culture) is generally considered Frank Gehry's most garish design. The hot pink, gold, and cream-colored metallic panels are designed to resemble a smashed electric guitar, and even envelope a monorail track that passes through the structure. This tantrum of a design was described by New York Times architecture critic Herbert Muschamp as "something that crawled out of the sea, rolled over, and died."

Gehry appears twice on this list for good reason. Even though the Walt Disney Concert Hall is viewed as an elegant venue that has played a significant role in the revitalization of downtown Los Angeles, its facade couldn't have been more intrusive. Many of the swooping stainless steel panels on the western side of the building were left as highly reflective polished plates upon the structure's original completion. This created concave reflective areas that would shoot light towards nearby apartment buildings. After roasting some condos, workers were ordered to dull the glare from many of the panels.

This Postmodern Michael Graves concoction is one of the most striking buildings in the Pacific Northwest. Seen as the first major construction of the Postmodern style in the United States, the building is used by both proponents and detractors as an archetypal structure of postmodernism. The brown, cream, and blue symmetrical face of the building are more engaging than the drab modernist towers that surround it—but the building has remained relatively hated since its opening.

Monolithic brutalist government skyscrapers line this large square in the capital of New York State. Often criticized for being lifeless, anemic, and gray (due to their extensive use of prefabrication and exposed concrete) the government complex contains the tallest building in the state outside of New York City.

Completed in 1925, this war monument overlooking the Palazzo Venezia is one of the most recently built monumental structures in the city. At not even a century old, the building is seen by many Italians as inauthentic—especially given the inclusion of a glass elevator overlooking the Roman Forum that's asymmetrically tacked on to the rear of the structure. Many Romans refer to the stark white building as "the wedding cake."

Westerners often describe this "pagoda skyscraper" as resembling "stacked Chinese takeout boxes." The Taiwanese tower briefly held the title of tallest building on Earth, and is far and away the tallest building in Taipei, needing a huge tuned mass damper in its upper floors to prevent the structure from moving too much in a seismic event. While many other supertall buildings let their height speak for itself with a relatively muted design, Taipei 101 has not been shy in going for something... different. 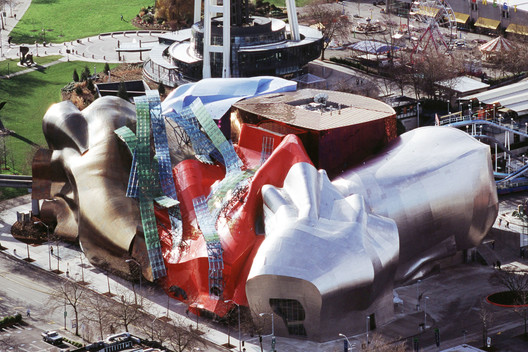