Zaha Hadid Architects have released new photos showcasing the ongoing construction progress of Leeza SOHO, a mixed-use office tower in Beijing's Lize Financial Business District. This twisting, contorted structural skeleton, which weaves together two separate sections of the tower and visually fuses them, will house the world's tallest atrium, rising the full height of the building.

The 172,800sqm building straddles a new subway tunnel that diagonally divides the site. According to the architects, the tower is designed to "rise as a single volume, divided into two halves."

As the tower rises, the diagonal axis through the site—defined by the subway tunnel—is re-aligned by ‘twisting’ the atrium forty five degrees to orientate the atrium’s higher floors with the historic north-south/east-west axes on which the Chinese capital was founded.

The practice has collaborated with SOHO China to realize four projects, totalling in all 1.4 million sqm of office and retail space. Zhang Xin, CEO of SOHO China has said: "China attracts the best talent from around the world. It’s important to work with architects who understand what the next generation requires; connecting communities and traditions with innovative new technologies to embrace the future."

The tower is set to top-out at 207 meters in September of this year, with completion slated for late 2018. 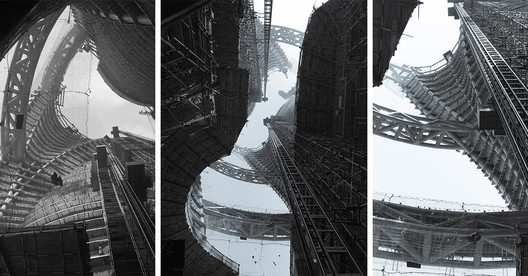