Elevator rides may offer an uplifting experience in the literal sense, but while they are indispensable in modern buildings, users face extremely compact spaces which are designed to fit effectively into buildings. Awkward looks at the floor or past other people’s faces reveal our discomfort with the elevator’s crowded anonymity. Couldn’t a more spatial experience lead to a more exciting journey? Flat screens and projections are starting to be included in elevators, but these are just the beginning of a revolution in the atmospheres created during vertical transportation. 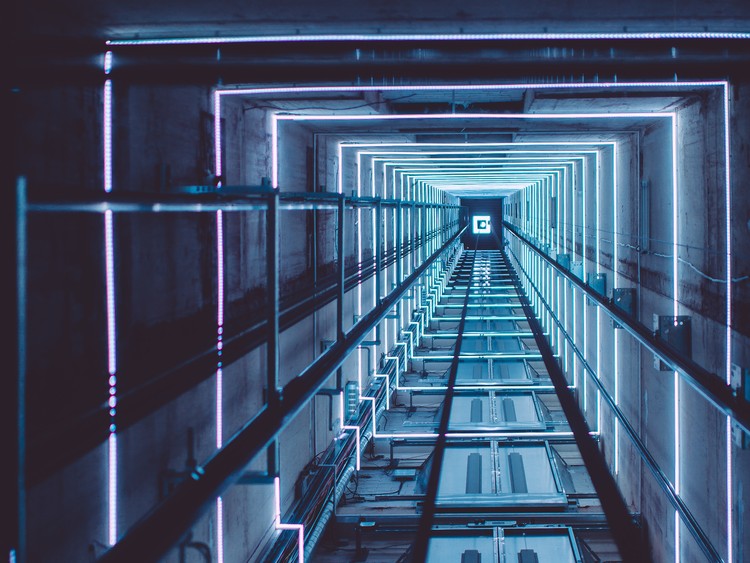 While the structures and facades of skyscrapers have changed significantly since their first emergence, the design of elevator cabins has not developed in a similar way. Clean stainless steel cabins and diffuse light often create a sterile character for changing floors. Even elevators in luxury buildings, equipped with stylish glossy surfaces, commonly fail to create an attractive welcoming gesture for visitors—especially in comparison to the diversity of striking staircase design.

In buildings where the entrance is actually via an underground parking garage, the first impression you get of the building itself is generally the elevator after you have passed through the fire doors. However, this journey almost always lacks a sense of spatial experience. Due to the fact that most elevators are enclosed in shafts, and cabin walls are usually equipped with opaque materials, the visual perception of movement is limited to the display of changing floor numbers.

The first step towards breaking out of the compact cabin could be taken by visually opening the ceiling. An early example was introduced by the engineer André Waterkeyn and architects André and Jean Polak for the Atomium in Brussels, Belgium, for the 1958 World’s Fair. They glazed the ceiling of the elevator cabin and mounted luminaires on the cabin’s ceiling edges, directing light upwards. They therefore allowed the Expo visitors to follow their journey upwards through the illuminated lift shaft. In contrast to the dull perspective that would be offered by most elevator shafts, this ride visually benefits from the distinctive hexagonal steel frame structure combined with visible service pipes.

In order to transform the usual monotonous shaft walls into stimulating visual narratives the New York designer Scott VanderVoort has experimented with graphic design and graffiti. One glass wall in the cabin and a hidden uniform illumination system for the wall art grants the passengers a vivid view.

For a more vibrant atmosphere, designers have started to mount luminaires onto the walls of elevator shafts and established a sense of vertical movement through a building’s floors with clear graphical patterns. A luminous ceiling at the top of the shaft transforms the ride into a spectacular ascension into light. In this way the claustrophobic black shaft can be converted into an uplifting space of light. Light artists like Olafur Eliasson with his “Weather Project” at the Tate Modern or James Turrell with his Sky Spaces have granted us an impressive sense of how powerful, light filled spaces can change our perception and feelings. The A’DAM tower in Amsterdam has heightened the sense of vertical movement with an extravagant scenography designed and supplied by InventDesign. Dynamic light lines and color changes in the elevator shaft evoke the feeling of a futuristic space ride.

Nevertheless, these abstract light patterns appear low-resolution compared to the high definition of today’s television screens which surround us. Yearning for more TV-like entertainment in their elevators, the Rockefeller Center in New York has created an elevator ride to the observation deck which combines colorful lighting of the shaft with text projections for branding, designed by Bob Weis Design Island in 2005. When entering the elevator everything looks normal: the walls of the elevator car are dark, the ceiling is white and backlit. But once the ride starts, the cabin transforms: the ceiling panels clear to reveal the elevator shaft, which in turn changes into a huge, color-changing tunnel. Blue LED luminaires in the corners of the shaft mark the different floors. As they are passed they communicate scale, the dimension of the space and the feeling of speed more intensely.

Pushing the limits of spatial experiences further requires designers to change the perspective for elevators again to include high-definition virtual reality or even the complete walls as a canvas for striking animations. Enclosed on all sides with highly detailed videos, which are linked to the vertical movement, broadens the horizon for the elevator passengers. Smart storytelling comes to the fore to relate the ride to the local environment for a unique experience. At the moment, New York offers the most advanced experiences for immersive elevator rides, with the Empire State Building and One World Trade Center competing for the most entertaining journey.

The ascent in the Empire State Building, designed by Imaginary Forces in 2016, summarizes the narrative in a high-resolution screen in the ceiling. The screen plays an animation of the construction of the skyscraper. The dialogue of the workers and their risks in handling the flying girders grants the engineering process a pleasant human touch. In contrast, the descent feels more abstract. It leaves the construction behind, starting with the art deco details of the lobby and ending with a map of Manhattan and the elevation of the Empire State Building. Although the film creates an intense spatial image of verticality, passengers’ eyes are merely fixed to the top of the cabin. One World Trade Center in Lower Manhattan has gone beyond this one-dimensional elevator setting and has converted their cabin’s enclosed walls into an immersive virtual environment.

While moving upwards at One World Trade Center, within sixty seconds visitors can virtually look out of “windows” to observe a 500-year time-lapse of New York City’s evolution. The cabin creates the magical impression that one is riding in a glass-walled elevator. Moving upwards, tourists travel towards the present, culminating in the assembly of the steel construction of the new One World Trade Center. The ride gives the feeling that the skyscraper is just being finished, enclosing the elevator shaft before stepping out.

The descent offers a different spatial experience. The glass cabin seems to float downwards, circling around the building before moving into the building through an open spot in the façade—although carefully avoiding any visions of crashing into the tower. The magic of the cinematic time machine, designed by Hettema Group and Blur Studio, lies in the surprising transformation of the vertical movement into a three-dimensional path with the spectacular gliding course around the skyscraper.

The future of elevator rides will definitely bring us dazzling parametric panels. They will replace uniform shaft walls with complex patterns of light and shadow. Color schemes will add an additional layer to the visual entertainment – either as painted surfaces or in combination with dynamic colored light. The other path for immersive elevator experiences will originate in virtual reality and screen technology. The Walls, floor, and ceiling will be an integral part of vertical CAVE-like journeys. Get in and the elevator cabin will uplift you to a new dimension combining perception, reality, illusion and augmented reality.

NewsArticlesLight MattersElevatorsLightingVirtual Reality for ArchitectsTechnologyNew York
Cite: Thomas Schielke. "How New Technologies Are Turning Awkward Elevator Rides into a Thing of the Past" 04 Aug 2017. ArchDaily. Accessed . <https://www.archdaily.com/877092/how-new-technologies-are-turning-awkward-elevator-rides-into-a-thing-of-the-past> ISSN 0719-8884
Save