Read more
Save
The Origins of Half-Timbering: 2000 Years of Non-Stop Nostalgia
Share
Or
Copy

Sam Jacob Studio harbours a long-held fascination with Half-Timbering. In this essay, Jacob examines the historical, cultural, and aesthetic roots of the style.

It’s not their fault they often go / To Maidenhead / And talk of sports and makes of cars / In various bogus Tudor bars.

(Perhaps those very same bars that Martin Freeman’s character in The Office notes have “a sign in the toilet saying: Don’t get your Hampton Court”.) “Mock Tudor” is often accused of “bogus”-ness, of lacking authenticity, of fakeness, and many other types of architectural sin. 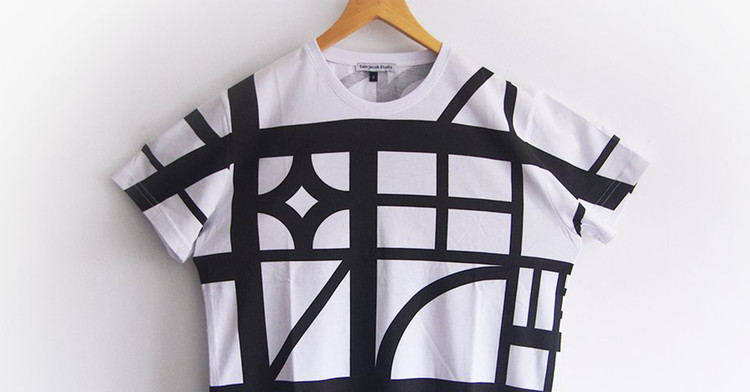 I’d argue, however, that Betjeman et al fail to recognise a profound depth and sincerity contained within the shallowness of this applied fake history. In fact, it’s perhaps Mock Tudor’s very shallowness which is an intrinsic part of its depth.

The following is the (or at least one) story of “Mock Tudor”, “Tudorbethan” and all of the other forms and bastard-isations of Half Timbering. It’s a story that spans millennia, that veers between the people and the powerful and wealthy, that rises and falls with nations, that contains different—and sometimes opposing—dreams. It is a story that ends, for now with a t-shirt.

Half Timbering was a vernacular construction technique that evolved in Germanic Saxony. It came to Britain with the Saxons in the 5th Century BC, who arrived as a mercenary army to prop up the failing Roman occupation. Once the Romans gave up on this rainy northern outpost, the Saxons remained. By the 6th Century, these Germanic tribes controlled most of the lowlands and were rapidly expanding to both the north and the west. And as they did, they built like they used to back at home. Maybe because that’s the way they knew how to build. But also, to make it feel like home. In other words, even two millennia ago, Half Timbering had already cut loose from being an actual bona fide vernacular building technology. It was already performing as a cultural symbol. Even then already a sign, a reconstruction, a revival. Removed from its origins geographically, but still bound up with identity.

Planted in a new land, half timbering embodied nostalgia for one culture. But with its roots reaching into the depths of a different soil it began to absorb the mulch of another.

The forests that had been home to the Celtic Druids were cut down to make buildings. But perhaps an essential part of the magical tree spirits of Celtic culture remained inside these timbers. We see this in the Anglo-Saxon poem The Dream of the Rood. Considered one of the oldest works of Old English literature it blended ancient pagan ideas with modern Christianity. The poem describes the crucifixion of Christ from the point of view of a the wood of the cross. It speaks: “I was cut down, roots on end […] I was raised up, as a rood […] I was wet with blood.” And if tree sprites could still inhabit the cross, couldn’t the same qualities of symbolism and identity also inhabit the tectonics of building components?

History continues in Anglo Saxon Britain. At least until the the last Saxon King, Harold, faced the invasion of the Normans. William of Normandy, victorious at Hastings, ascended the throne in London on Christmas Day, 1066. He and his Norman Lords seized the assets of the Saxons, recording their new assets in the “Great Survey” that comprised the Domesday Book. But as an occupying military force, the Normans began constructing a network of castle-strongholds to maintain power. The White Tower of the Tower of London was the first. 21 years later 100 had been built across the Kingdom.

Oppressed by military strength Saxon culture however remains distinct. Myths and folk heroes like Robin Hood emerge as the scourge of Norman aristocrats (note of course, that Robin and his Merry Men live, wherelse but the forest). And Saxon culture inhabits its old half timbered architecture. In contrast to the massive stone military infrastructure of the Norman castles, Half Timbering is the architecture of the people: the inn and the home.

Time passes, the House of Normandy falls, and, for the purposes of our story, we pick things up as Henry Tudor defeats Richard III at Bosworth Field. The Tudors forged a powerful new identity for England founded in large part by the rise of English naval power. Seafaring brought security and riches, drove exploration and early colonialism and provided the broad context for Henry VIII’s ability to split with the Catholic church. Meanwhile, Half Timbering became the architectural style of the ruling classes. Tudor architecture—as we can finally call it—became extravagant and decorative, like at Little Moreton Hall where the technique becomes so intricate and graphically intense as to work like Op Art.

We should note that Half Timbered Tudor architecture is built with the very same skills that are providing England with her burgeoning sea power. These buildings celebrate the importance and skill of timber craftsmanship, while expressing the riches and power that that craft had accrued. Tudor architecture in other words is a kind of spin-off of military technology.

Sir Walter Scott’s novel Ivanhoe, published in 1791, was an embellishment of the Robin Hood story – big on Saxon/Norman fighting. It led to a fashion of reviving English vernaculars, re-mythologising stories of King Arthur and Robin Hood. This historicism is later theorised by Pugin and Ruskin, and bleeds into the Arts and Crafts movement.

Arts and Crafts was driven by a moral and social urge and arising in response to the effects of the Industrial Revolution. Politically, it was nascent socialism with anarchist tendencies. In its design manifesto, it reached back to pre-industrial modes of making in the age of the machine. Along with the kinds of medieval crafts that were revived by William Morris, the architects of the Arts and Crafts revived forms of half timbering.

Revived as an overtly historical style but imbued with a new political meaning. On the one hand establishing a direct line with older forms of labour and with cultural myths that animated ideology. We could even imagine the Arts and Crafts movement modeling itself of a Hoodian model: A band of men living in the forest away from civilization, robbing of the rich to give to the poor, in opposition to the control of the state and on the side of the people.

The decorative effect of Half Timbering is now pattern as political statement.

Arts and Crafts drifts from its Christian Socialist origins into mainstream fashion. It becomes a decorative symbol of status, not politics. The country houses designed by Edwin Lutyens feature Half Timbering as part of their picturesque montaging of historical styles. These large, “Tudorbethan”, bespoke homes for the wealthy became the template for the inter-war building boom. Volume building interprets the pre-war, expensive Arts and Crafts villas. Building quick and cheap, coupled with a shortage of skilled labor leads to a shift in Half Timbering from structure to applique. Thin timber panels fixed to the exterior of the buildings that make patterns not limited by the demands of holding buildings up.

These houses represented a way of life. These miniaturised manor houses represented safe European homes after the mechanised horror of the First World War. Half Timbering still retained some of the progressive sentiment of Ebenezer Howard’s Garden Cities. It became a mixture of optimism and fear, built on a budget. These Metro-Land homes were a mass market version of the pre-war progressive and bohemian lifestyle.

By now, any vestige of a traditional notion half timbering as a vernacular building technique has been cast off. Liberated and globalized through media, it becomes an international style. Its connection is no longer with a tribe like the Saxons, a Royal Dynasty like the Tudors, a country, or indeed an ideology.

In the same way, the stories that were once part of the myth of Half Timbering are remade: Douglas Fairbanks, a black and white and silent Robin Hood, Errol Flynn a Technicolor outlaw. Later, Disney cast a cartoon fox as Robin Hood. Kevin Costner plays a sullen PC romantic version and Sherwood Forest is stalked by denim clad, Fender strummin’ minstrel Brian Adams. The folk story has less to do with Norman England and everything to do with Hollywood sensibilities. Like clouds of radioactive fallout, folk stories reach the jet stream and envelop the globe.

Half Timbering continues as a means of construction, but it also gains layers of meaning throughout the centuries. At each iteration it continues the story. Tacked onto the outside of Moe’s Tavern in The Simpsons, painted pink in suburban London like a Jamie Reid collage, the framing of a Morris Traveller car, an option offered by developers in new developments in Chinese cities.

Meanwhile, in the UK, an even more debased form of Half Timbering is the architectural style of the volume housebuilders executive homes, is applied to the hardly-vernacular of out of town "Asdas", a chain of supermarkets. Black and white stripes fixed to the mass of these strange big box retail by way of townscape along with fibreglass clock towers.

But even in these half-cocked examples, Half Timbering is like light from a distant star: incredibly old yet, as it falls on our retina, bright and new. Half Timbering has been made repeatedly new through its different incarnations. Bristling with meanings which continue to peel away from geographic place and circumstance, from the specifics of situation to a general and generic condition. Each time, a nostalgia that is reconstructed in the present with a new purpose.

Indeed it’s the very bogus-ness that Betjeman derides that is the vital authenticity of Half Timbering. A venerable form of bogosity that stretch back through history in over 2000 years of non-stop nostalgia.

It is out of this story that the Half Timbered t-shirt emerges. Another kind of flimsiness, this time fabric, dislocated from the facade of the building to become architecture for your body.