Although trained as a Control and Computer Engineer, Ali Alamedy has since turned his hand to manufacturing scaled, miniature dioramas. After being forced to leave his home in Iraq, he and his family are now based in Turkey – and it is here that he has honed a skill in constructing these tiny, intricate worlds from a broad range of ordinary materials. All scaled at 1:12, these complex and often hyper-realistic models are inspired by the environments around him, complemented by his experiences and, of course, his imagination. In this study of Alamedy's work, ArchDaily asks: how do you do it? 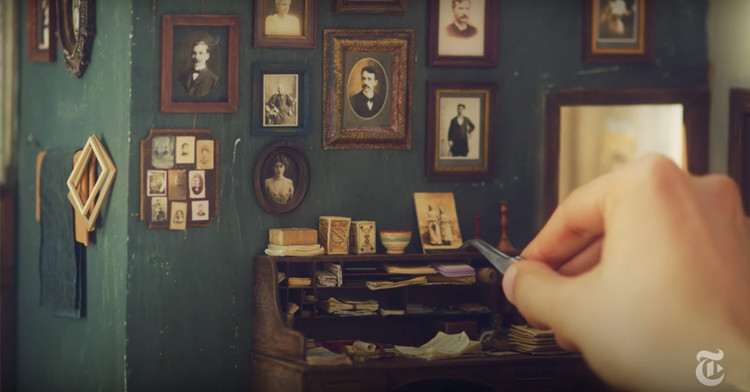 AD: Could you take us through your modelling process?

AA: My process has many stages. Making that initial decision to select the subject is the hardest part – I spend months in order to find a suitable subject; one that I would really love to spend hundreds of hours working on. Most of my projects recreate single scenes from the past – scenes that have special stories to be told. I then conduct the necessary research, and it takes sometimes up to month or two to figure out all the elements inside a particular scene (and I mean everything)!

After collecting all necessary details I begin to work on the surrounding environment, such as the walls, floor and roof. Following that, I start furnishing the scene. I try to construct and model every detail out of the same material that it would be in real life, so it has a realistic look. I mostly use wood, metal, plastic, etc. Each material needs it's own special treatment and its own glue, paint, tools and so on. After I have built the piece, I start the process of weathering. I then try to create an effect that connects the piece to it's environment – so a chair that used to be in a specific place and has a shadow effect on the ground, for example… these small details help us to create the spirit of the place.

What scale do you usually work in?

Where does your inspiration come from?

Everything inspires me: video, photos, places I travel through one day, scenes I imagined in my mind – sometimes small details seed ideas that build into a whole scene. The most inspiring thing to me is the subject, however – often I read about a profession or a person or an era and I find myself opening my notebook and starting to sketch a scene.

How long does each artwork take to produce? How important is creating a perfect mimic of reality?

The time it takes depends on the scale of the scene, the number of details inside the scene, and how hard the research is to complete. Sometimes I spend a month or two, sometimes up to nine months. The Photography Studio from the 19th Century, for example, took me nine months in total – two months for the research (it was very hard to find enough photographs and information about photography in that era, so I had to read so many articles about it to figure out how the studios worked). I try to make my scenes appear 100% real; in other words, I don't just want to re-scale things, but make it as real as they look in real life. Sometimes I really wish that I could shrink in size to make my work look better!

Have you ever considered becoming an architect?

I have loved architecture since childhood, but didn't have the chance to study it. Instead I studied Control & Computer Engineering, but I have read so much about architecture through history and nothing is closer to my heart than the Victorian era.