Save
The History of One of the Best Theaters in the World: Teatro Colón in Buenos Aires
Share
Or
Copy

Considered as one of best buildings for opera in the world, the Colón Theatre in Buenos Aires is internationally renowned for its acoustics and its heritage value, showcasing the Italian and French influence on cultural architecture in Argentina. It is situated in a privileged location of the city´s downtown, between the streets Cerrito, Viamonte, Tucumán, and Libertad.

Inaugurated on the 25th of May in 1908, it had a significant impact and is considered one of the most emblematic historical monuments of the country. 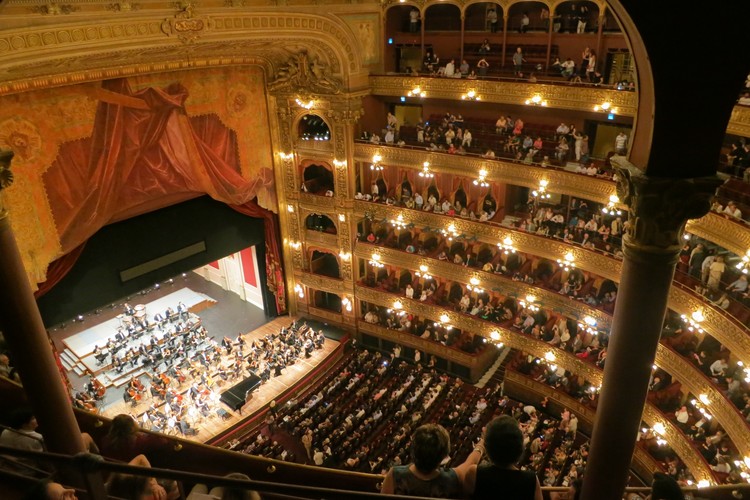 The Italian architect, Francesco Tamburini, completed the initial designs for the current theater in 1980. However, after his death in 1981, the plans were modified and construction began under his partner, architect Víctor Meano. Four years prior to the theatre´s inauguration, Meano was murdered and the completion of the project was taken over by the Belgian architect Jules Dormal.

In 1989, the Colón Theatre was declared a “Historic National Monument” and between the years of 2006 to 2010 the building underwent a process of extensive conservation maintenance and technological modernization, which was carried out by Argentinean heritage specialists and technicians.

The building showcases an eclectic style from the beginning of the twentieth century. It has a total surface area of 58,000 meters squared. The main room is shaped in the form of an Italian horseshoe: its small diameter measures 29.25 meters, and its large diameter reaches 32.65 meters with a high of 28 meters. It has a capacity of 2,478 seats and can fit up to 3,000 including those standing.

Originally, the French artist Marcel Jambon painted the dome of the main room, but its subsequent deterioration around the 1930’s resulted that it was left for decades without decorative painting. In December of 1965, Raúl Soldi was hired to restore the dome, which was completed by March of 1966.

In the center of the dome, a bronze chandelier hangs with a total weight of over a ton and a diameter of 7 meters. Within the dome, there is a space that allows musicians to generate different sound effects.

The Colón Theatre has specialized production workshops that are able to prepare all the necessary elements for staging a show, meaning that the majority of the curtains, stage designs and costumes are made in the same building.

For a theater of these characteristics, acoustic quality is an important virtue. The quality of the acoustics in the Colón Theatre is owed to the technical knowledge applied in the form of a horseshoe. As it causes a proper reflection of sound it becomes an echo chamber.

Additionally, the architectural proportions of the room and the quality of the materials – the distribution of the wood, the tapestries, the curtain and the carpets- maintain an equilibrium that contributes to the favorable acoustic conditioning. 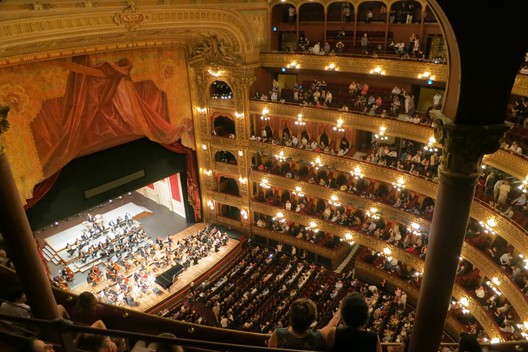