Complex wood joineries have long been staples of Japanese architecture and construction, demonstrating an impressive and even artistic craft passed down through generations of Japanese carpenters and woodworkers. In recent times, with increasingly available resources and technology, these techniques have been further explored and made publicly accessible, be it through demonstrative gifs or downloadable fabricated joints.

In relation to these resources, Aryan Shahabian, a researcher at the University of Applied Arts in Vienna has developed an algorithm that generates over a billion distinct combinations of interlocking 3D objects, inspired by Japanese joineries. Both single joints and free forms are smoothly handled by the software, combined with endless resultant forms.

The algorithm converts any continuous free form geometry into a network of 3D compound joints. Each of the interlocking objects has its own unique geometry. All objects feet together with no gaps and with no conflicts.

This software is a step forward in the constantly evolving field of parametric design. With the aid of algorithms like these, new possibilities will be unlocked within the realm of construction and fabrication, used in combination with laser cutters, CNC machines, 3D printers and related technology.

Whether the algorithm will be made publicly accessible is not yet known, but in the meantime, check out the extremely satisfying connections at work in Shahabian’s demo videos above.

For centuries before the invention of screws and fasteners, Japanese craftsmen used complex, interlocking joints to connect pieces of wood for structures and beams, helping to create a uniquely Japanese wood aesthetic that can still be seen in the works of modern masters like Shigeru Ban.

If you were captivated by these animations of traditional Japanese woodworking joints, here's a chance to try out some intricate joinery techniques for yourself. 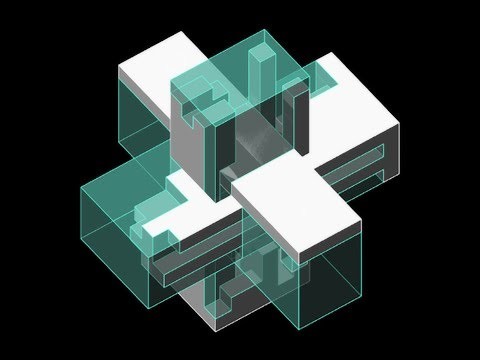