The Naomi Milhave Foundation have released OMA‘s first renders and drawings for their upcoming MPavilion which is set to take shape this fall in Melbourne, Austrailia. The counterpart to the Serpentine Gallery Pavilion in London, the MPavilion is now in its fourth year. Comprising static and dynamic elements, OMA’s proposal allows for multiple configurations that can generate unexpected programming, echoing the ideals of the typology of the amphitheater. Following the idea of the traditional amphitheater, OMA’s design will be “itself built to perform” as a space for public debate, design workshops, music and arts events. 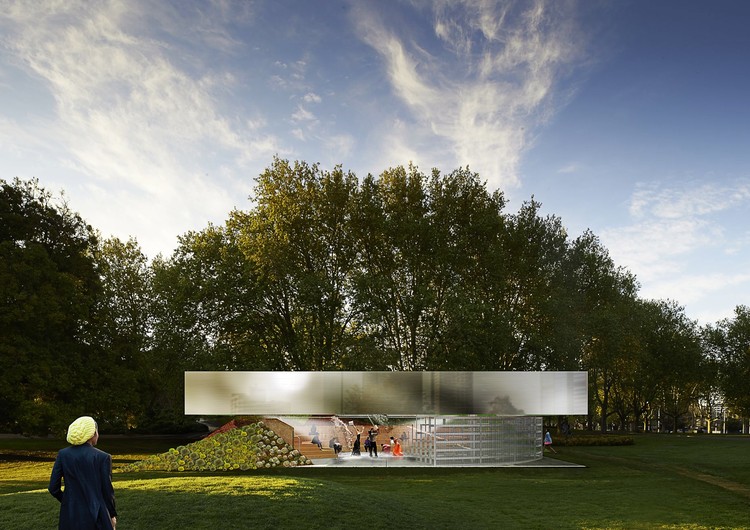 The Pavilion enjoyed great success in last year’s design by Bijoy Jain of Studio Mumbai – garnering more than 94,000 visitors to over 287 free events in its 139-day run. Along with Perth's new Museum (beginning construction in 2020), the MPavilion will be OMA's first project in Australia. Past designers include Bijoy Jain, Sean Godsell, and Amanda Levete.

Commenting on their aims for this year’s MPavilion, Rem Koolhaas, Founder and David Gianotten, Managing Partner of OMA said “MPavilion is a project that hopes to provoke discussion around what architecture can do both globally and in an Australian context. We’re interested in treating this pavilion not just as an architectural object, but as something that injects intensity into a city and contributes to an ever evolving culture."

Settled onto an artificial hill of indigenous plants, MPavilion 2017 will comprise a circular amphitheater covered by a huge floating roof structure. (Koolhaas and Gianotten previously worked together an earlier floating roof project, the Shenzen Stock Exchange). A two-metre-deep gridded, machine-like canopy with a protective translucent roof will provide lighting and technology services for the series of free public events. The pavilion’s materiality will be “related to its direct surroundings, positioning the Queen Victoria Gardens itself – and the city of Melbourne – as a basis for activity and debate within the pavilion,” says Gianotten.

The moving elements of the design will by the rotating grandstands in the amphitheater. The moving stands allow for different configurations of space depending on the use of the pavilion and create a “flexible civic space” sheltered by the distinctive roof. Blurring the threshold between inside and outside, the sheltered space will also, in turn, blur the distance set between audience and performer.

OMA’s exciting design engenders a theatre for ideas with Melbourne as its backdrop. MPavilion 2017 will be extremely different to previous years, with a designated yet flexible stage enabling all kinds of cross-pollinated activity. Working with Rem, David and the OMA team is an extraordinary privilege, and I look forward to seeing them bring MPavilion 2017 to life with their multi-faceted intelligence and vision - Naomi Milgrom AO, MPavilion founder.

Construction is set to commence in August. The MPavilion will open free to the public on Tuesday 3 October 2017 until Sunday 4 February 2018.

The Naomi Milgrom Foundation has selected Rem Koolhaas and David Gianotten of OMA for the design of Melbourne's 2017 MPavilion. The announcement comes after this weekend's closing of the 2016 MPavilion, designed by Bijoy Jain of Studio Mumbai, which welcomed more than 94,000 visitors to over 287 free events in its 139 day run.

8 From the architect. MPavilion 2016 is part of an international movement in handmade architecture and uses 7km of bamboo, 50t of stone and 26km of rope to create an extraordinary 16.8m square summer pavilion for Melbourne. Encapsulating Jain's ongoing interest in traditional craftsmanship and human connectedness, the pavilion sits on a bluestone floor sourced from a quarry in Port Fairy, Victoria. 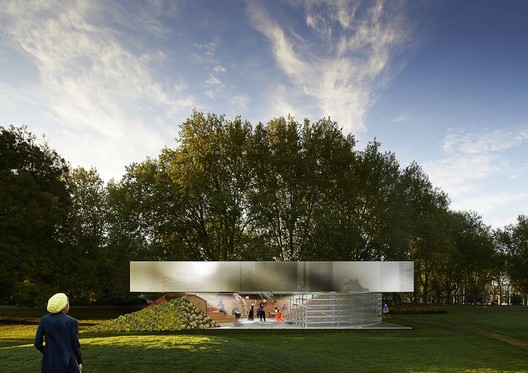