Some unbuilt designs—the hopes they reveal and the reasons they stayed unbuilt—tell a powerful story. So it is with the home Frank Lloyd Wright designed for Marilyn Monroe and Arthur Miller. Or perhaps it’s what we think we know about Marilyn that makes it so poignant?

The union between a quiet-living intellectual and the world’s greatest sex symbol was baffling to the public, and the conflict between their aspirations and personalities seems to have played out in their plans for this Connecticut home. After moving into Miller’s country retreat, Monroe asked Wright to design a new house for them on this vast piece of land.

As Miller explained in his memoir: “Her impulse was royal, in part a kind of gift to me of a unique home.” And Wright’s proposed design lived up to this regal gesture, featuring a dramatic, lowered circular living room almost 20 meters across, covered with a domed ceiling and skylights, surrounded with imposing columns and leading out onto a swimming pool built into the side of a hill, which Miller expected to require “heavy construction on the order of the Maginot Line.”

The plans had in fact been repurposed from a house originally designed for a rich Texan couple, then offered to a Mexican official for a home in Acapulco Bay. Besides this theatrical centerpiece, perhaps better suited to flamboyant South West living, the design offered multiple reception and guest rooms, as shown in Archilogic’s 3D model. (The rooms intended for the couple’s own living space were to be on the second floor, for which plans are not available—a last refuge of privacy for Marilyn!) Further conspicuous features of the Wright style are the repeated circle motif and generous use of fieldstone.

But while it would have been a fantastic place for blowout Hollywood parties, this did not at all suit Miller’s idea of a peaceful country life—nor his budget. While Monroe and Wright were alike in their disregard for costs, he was far more frugal, and intensely disliked the idea of “some elaborate house to impress the world.” The plans were dropped. Thanks to his memoir we know exactly what Miller thought of them, but what about Monroe? Did she also find the design frivolous and extravagant, or was she longing to bring some movie star glamor into her new role as a rural housewife?

It’s easy to imagine that this house encapsulates the personality conflict that drove the couple apart after just five years of marriage. Monroe learned to her horror that Miller considered her embarrassing; outsiders observed that she seemed to crave approval for her appearance, while also wanting to be appreciated for more than just her looks. She longed to fit into her husband’s intellectual world... but in the end, she was as out of place there as this Acapulco showpiece of a house.

Don't miss Archilogic's other models of seminal projects shared on ArchDaily—click here to see them all!

Archilogic's model for this article was created by Alainz Zanchetta. 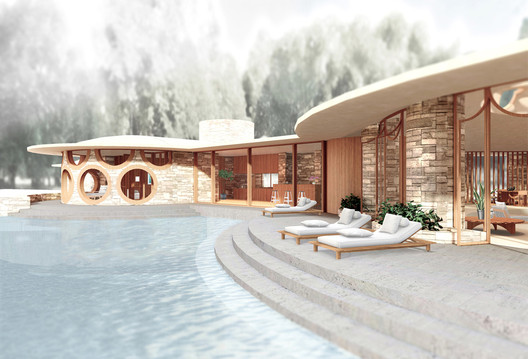