MVRDV and local architects Flint have revealed designs for a new riverfront mixed-use housing complex in Bordeaux, Ilot Queyries, as the project breaks ground. Located on the east bank of Garonne River, the site will house over 300 apartments, retail spaces, a rooftop restaurant, and a communal park in a densely mixed environment. The complex will integrate into the neighboring ZAC Bastide-Niel masterplan by MVRDV to create a lively urban neighborhood aimed at “combining the virtues of the historic city–intimacy, surprise and liveliness– with the density, ecology, light and comfort of the modern city.” 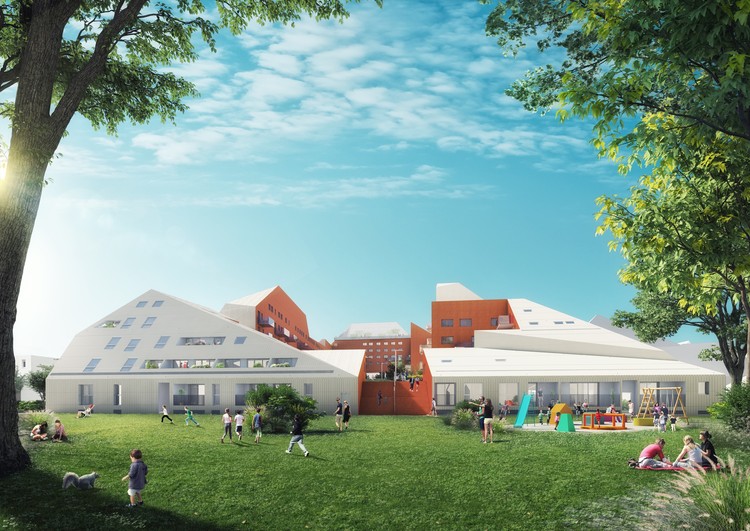 The form of the complex was determined by following four core principles: abundant daylight, natural ventilation, winter light access, and respect for neighbors. The resulting complex features angled cuts that offer views towards the river and the World Heritage Site-designated city center. Matching the language of the masterplan, the facades have been carved with 45 degree angles to open up the building in response to the climate and to create innovative housing arrangements.

Along the riverfront, the complex’s largest building will be adorned with a distinctive gold-splashed facade on several faces, as well as ceramic tiles to provide a textured effect. At the peak of the front building, the glass-enclosed rooftop restaurant will offer panoramic views of the city, while further into the site, the large public courtyard will offer a garden of alder and birch trees, intermixed with high grasses.

“For the Bastide Niel master plan we make an update of the European city: based on the values of the historic city that is intimate, dense and mixed, whilst at the same time proposing new objectives like sunlight for all, even on the ground floor, new energy supplies with solar panels, integrated water system and more green spaces,” explains MVRDV co-founder Winy Maas.

“The concept of the cuts of the volumes is introduced here at Ilot Queyries which can be interpreted as a pilot project of the master plan Bastide Niel. Cuts in the volume allow the new qualities and allow adapting to the neighbours and mimic the height of nearby buildings. The result is ‘a true Grande Dame’ which stretches from very low pavilion-like housing towards the neighbourhoods at the back and more ambitious and monumental where the scale permits to do so, for example at the Garonne riverside facing the historic left bank.”

The Ilot Queyries project was selected as the winner of a competition in 2011, in which MVRDV collaborated with Marc Joubert (JA) on an overall plan for the site. Plot divisions were later made, with MVRDV leading the design of the main building and other plots being designed and developed by both Flint and JA. The landscape design is a collaboration including Sabine Haristoy and Flint.

The development joins a number of ongoing projects helmed by MVRDV in France, including a collective housing development in Rennes, a brownfield site regeneration plan in Caen, a restructuring of the Montparnasse Superblock in Paris, and the Part-Dieu shopping center in Lyon.

Ilot Queyries is expected to be completed in mid 2019.

The Urban Community of Bordeaux (CUB) and MVRDV recently presented the master plan for Bastide Niel, a 35ha extension of Bordeaux' city center onto the right bank of Garonne River. The dense urban master plan will offer 3200 homes, offices and urban amenities, respect the existing fabric of the city and become one of the largest zero energy neighborhoods in the world.

A team consisting of MVRDV, ALL + Giboire has won a competition for the project Ilot de l'Octroi, a new residential redevelopment in the city of Rennes, France that will transform the area into a socially adhesive green community along the Ille et Vilaine rivers. 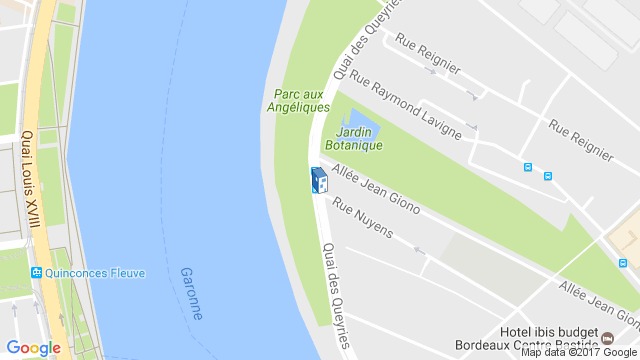 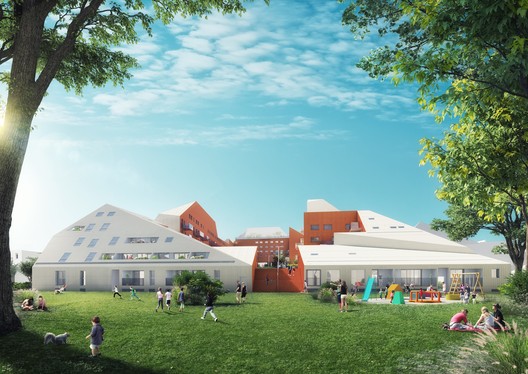