Denmark-based AART architects have been selected to design the country’s national rowing stadium, seeing off strong competition from prominent firms such as BIG and Kengo Kuma. Situated upon Bagsværd Lake on the outskirts of Copenhagen, the scheme seeks to allow the sporting elite and broader public to form a close interaction with picturesque natural surroundings. 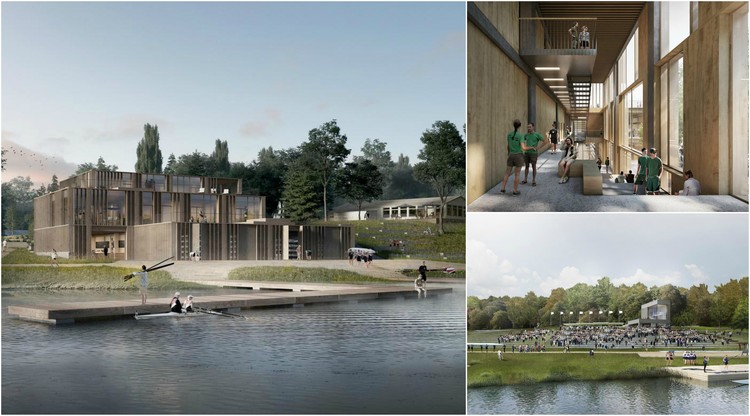 Flanked by water and forest on all sides, the Denmark Rowing Stadium fuses rowing with other forms of social and scenic experience. An open, inviting rowing center forms a focal point to the scheme, surrounded by an activity space, promenade square, and park, whilst nooks and crannies throughout the building create natural informal meeting places. The interior spaces frequently open themselves out to the natural surroundings, providing a transition between the clean, expansive lake and dense recreational forest. As such, the user is immersed in a field of tension between the lake and forest, giving the building an inherent transparency.

It is much more than a rowing stadium. It is a sports centre that mixes various kinds of sports with social and scenic experiences. It shows that sport – for the elite and the public – is not just about strength and stamina, but also social well-being and mental health. It is about the whole person, and that is precisely the starting point for the new national rowing stadium that, as a broadly inclusive framework in everyday life, helps to enhance the performance of the individual athlete – AART architects.

Rather than being dug into the landscape, the rowing center rests upon the grid structure of the boat hall, with timber cladding further integrating the scheme into its surroundings. A wooden referee tower will also be constructed, inspired by the forest’s soaring trees. In contrast to the horizontal lines of the spectator stands, the referee tower will be clad in vertical wooden slats, affiliating itself with the main structure. Complete with a climbing wall, pull-up bars, and a covered terrace, the tower exemplifies AART’s vision of a multi-use center which, though integrated with the environment, forms a distinctive landmark for Danish sporting excellence.

AART Architects have won the competition to transform the Aarhus Municipal Hospital into a new campus for Aarhus University in Denmark. In an effort to renew and enhance the original qualities of the site-like its red tile façades and consistent compositions of public space-as well as to support academic and urban life of the future, the project will uphold "the site's historical potential by paving the way for new prospects to create a forward-looking transformation of this unique spot." 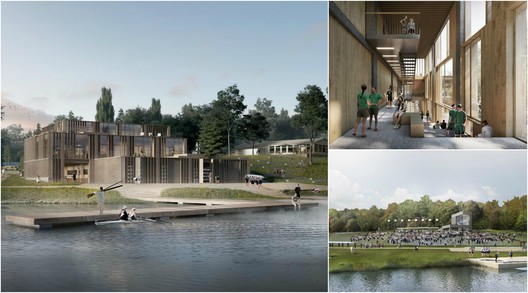