The last house designed by Frank Lloyd Wright was never built, with its plans being delivered to the client just days after Wright’s funeral. But the realization of his vision is tantalizingly possible, as those plans, and the parcel of land it was designed for, are still held by the same family—and are for sale, along with the adjoining plot and an existing Wright house.

The owner gave this house the name Riverrock, because of the intention to build it out of rocks from the river running through the property. Together with the poplar tree chosen and placed on the site by Wright himself, this shows the close connection to natural surroundings so typical of his work.

Other Wright signatures on display are the strong, even exaggerated horizontal lines—see the dramatic overhang and the long line of windows that runs down the front—the central chimney, sharp, unconventional angles, and the corner window. To that list, Riverrock adds interest with variation in height and level.

From the front, the house appears at first as a long horizontal streak: a flat roof extending from shed, to carport, to house; stone walls (flat, shallow river rocks, again emphasizing the horizontal); and tall windows. But in truth, the angles are more interesting. That long roof above the line of bedrooms slopes gently up, but the higher roof above the living room at the far end slopes backward. To the right, as the ground drops away, the stone wall wrapping around the house and terrace becomes taller and taller, forming a sharp, dramatic arrow. And inside?

When entering Riverrock, one embarks on a journey. Most houses bring the visitor as soon as possible into the main living area. Here, we see just the opposite: one must first walk the length of the house, through a long, uncompromising stonewalled corridor. At the end, a few steps take you down into the living area, giving the first sense of the high, airy space to come. Turn right, keep walking, and you’re finally in the living room proper, rewarded with a double-height wall of windows (thanks to that sloping roof as well as the lower floor level), creating a dramatic, light-soaked, inviting space, complete with fireplace.

Behind that chimney is the kitchen—a cell at the heart of the house, with extra-tall walls reaching up to yet another level of roof. No outside views for the cook; like the stone corridor, it’s a little claustrophobic. Add this to the list of aspects that might put off a modern owner, along with the lack of a bath (two shower rooms, but no bath) and garage. Then weigh those against this house’s undeniable charms: the local, natural materials; the magnificent living room; the fascinating angles and dramatic setting. It’s a house that draws you in, inviting ever more exploration. Would you live here?

Don't miss Archilogic's other models of seminal projects shared on ArchDaily—click here to see them all! 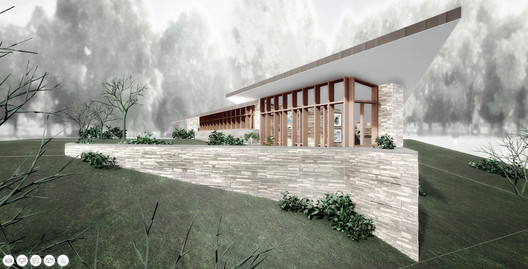