The free exhibition began on May 1 and will run through March 2018 in the Rare Book Room in the Central Library in Buffalo. The books included in the exhibit were curated to showcase the cultural heritage that inspired the design of the built environment in and around Buffalo, New York. The three architectural historians who curated the exhibit were the ones who revealed the (previously unknown) depth of the collection, over 400 books on architecture and landscape design. The books were originally assembled as a resource for architects and residents in the growing city of Buffalo and served as inspiration for much of the city’s design.

The subject matter of the books available for viewing is wide-ranging, including some titles from Frederick Law Olmsted’s reading list, books by local Buffalo authors, books that show how designers in the past envisioned the future and predicted the effects of the skyscraper, and many more. A companion catalog to the exhibit has also been released in memory of a local architect, Theodore "Ted" Lownie (1936-2017), which details the assembly of the Library’s collection and also describes the illustrations in the exhibit. The catalog is available for purchase through the Library as well as online.

Also online as part of the exhibit is a long list of books from the collection that have been digitized and are available to the public to read for free. The books included in the online collection span a range of years from the late 1400s to the early twentieth century, much like the physical exhibit. One of the highlights is John Ruskin’s The Stones of Venice, printed in 1851, a detailed examination of Venetian art and architecture including examples of over eighty churches. Another notable inclusion is Viollet-le-Duc’s Lectures on Architecture, in which he writes about his (hugely controversial at the time) approach to architecture and architectural education. Last but certainly not least, Vitruvius’ 10 Books on Architecture is available as well--the English translation is not included, but the digitized version does contain original illustrations from the 1660 publication that are well worth a look.

The list of online books (with links) can be found here.

Interested in the Bauhaus? There's free books for that too. 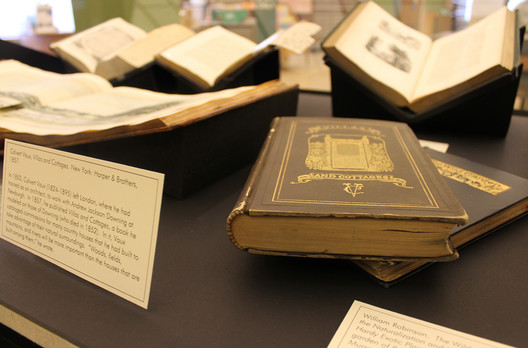