Herzog & de Meuron have completed construction of their latest project, a high-rise luxury residential skyscraper on 56 Leonard Street, New York City. Conceived as a stack of individual houses resembling a Jenga tower, the building is the tallest in its Tribeca neighborhood. With its tall and slender silhouette, 56 Leonard Street is the latest in a series of contemporary skyscrapers punctuating Manhattan’s skyline.

The approach to creating the tower’s pixelated form was to design it from the inside-out. Herzog & de Meuron treated individual rooms as “pixels", grouping them together on a floor-by-floor basis. By “pixelating” rooms and parts of the program into groups, their arrangement came together to directly inform the final volume and outside shape of the tower. The assembling strategy also creates terraces and projecting balconies, and from the inside, the experience is said to be like stepping into a series of large bay windows. Local construction methods were considered to create shifting and varying floor-slabs to create corners, cantilevers, and balconies. The personalized nature of the exposed concrete slabs within the tower means that only 5 of the 145 apartments are repeated, with no two-floor plates being the same.

Design and planning of 56 Leonard started in 2006, with construction starting in 2008. The project was delayed when its developer Alexico Group was hit by the recession and failed to cover the tower’s costs. Work picked up again in 2012 and was anticipated to finalize by 2016. The pixelated form of the tower is the latest in a series of stacked iterations explored by various architecture firms around the world, also seen in works by Bjarke Ingels and Ole Scheeren.

Video via: The Real Deal.
News via: Herzog and De Meuron.

Photographer Paul Clemence of ARCHI-PHOTO has shared images of 56 Leonard Street by Herzog & de Meuron. Nearing completion, the 60-story residential tower will be the tallest structure in Tribeca when it opens later this year. The concept of 56 Leonard Street is to disrupt the monotony of typical high-rise city buildings with a more varied articulation achieved by stacking recognizable individual houses.

Yesterday, I was visiting the Skyscraper Museum in New York, and I saw an incredible aerial photo that shows the evolution of downtown Manhattan during the last century, from the water reclamation to the black towers to the new skyline without the twin towers. Undoubtedly, this city changes its shape very often. 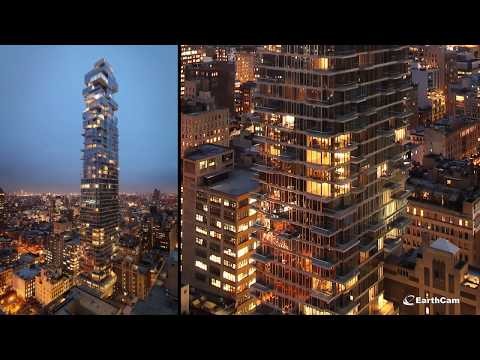