Save
Forget Treehouses - Cliffhouses are the Future
Share
Or
Copy

In major cities around the world, buildable land is at a premium. At the same time, a continued trend of urban migration has led to a shortage of houses, inspiring a wealth of innovative solutions from architects and designers. Swedish firm Manofactory have literally taken housing solutions to a new level, questioning why we need to build at ground level at all.

Many animals, including birds, build their nests in trees, under roof tiles or in rock crevices above the ground. Humans already build simple nesting boxes for birds to live in, causing Manofactory to question why we can’t build nesting boxes for ourselves – a simple house with several rooms, windows, and climate protection. Pointing to the numerous cliff walls in cities across northern Scandinavia and elsewhere, Manofactory have designed the Nestinbox – a small wooden house with a steel structure to be mounted on sheer cliff faces. 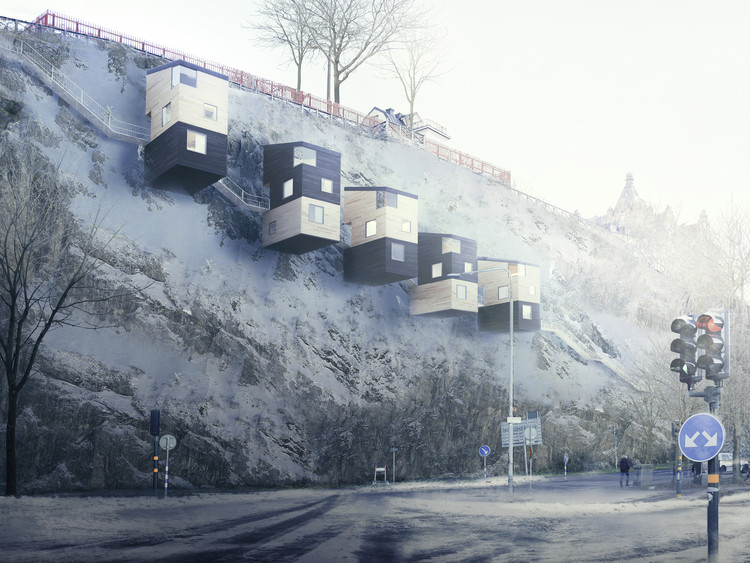 As if defying gravity, Nestinbox hangs freely in the air with one side mounted against a cliff face. The design process began with the general blueprint of a birdhouse – a tall, light wooden structure with a simple sloping roof. This basic form has since evolved to develop a functional home for one or two users. The Nestinbox is clad with horizontal light and dark timber panels, creating a playful dialogue along the façade whilst contributing to a perceived visual reduction of building height.

Inside, the house is arranged over three floors, with a living area of 50 square meters bringing it in line with space standards of major cities such as London. Each unit contains a kitchen and dining area, living room, WC with shower, a double bedroom, and a studio space lending itself to future use a children’s bedroom. A central spiral staircase links all three floors, with a large void on the first floor creating a sense of space, cohesion, and openness despite the compact arrangement. The floorplan has also been considered to allow one side elevation to be free of windows, raising the possibility of mirrored Nestinboxes near or attached to each other without impeding outlook or natural light.

Children have had treehouses for centuries – finally, adults have something cooler!

Taschen's latest volume draws together the architectural underdogs that, despite their minute, whimsical forms, are setting bold new trends for design. When economies falter and construction halts, what happens to architecture? Rather than indulgent, personal projects, the need for small and perfectly formed spaces is becoming an economic necessity, pushing designers to go further with less. 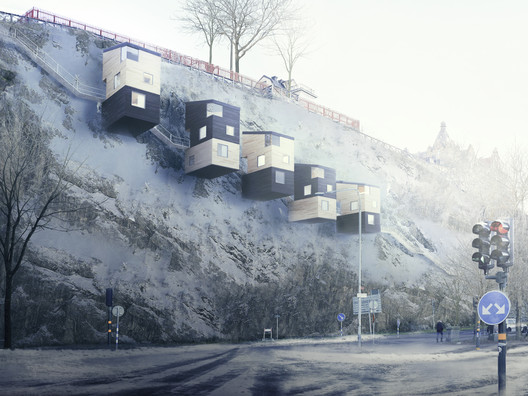