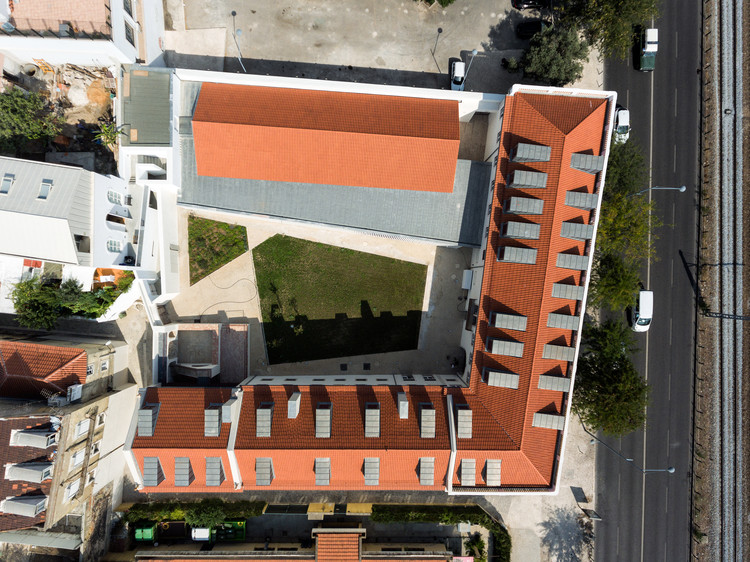 Text description provided by the architects. Galeotas House is a set of several buildings originally dedicated to storage and housing, constructed between the18th and the 20th centuries and considerably damaged at the starting point of the project development. The intervention aims at preparing the site to host the headquarters of UCCLA - União das Cidades Capitais de Língua Luso-Afro-Amero-Asiáticas - and CAL - Casa da América Latina -.

Located in the river front of the city, surrounded by Rua da Junqueira and Avenida da Índia, the site faces the embankment constructed during the 19th and the 20th centuries. The first register of this complex in the city plans dates from 1807. However, this document only shows the west side building of the complex. It is necessary to wait about a hundred years to see the whole complex represented in Silva Pinto’s 1911 plan. The site includes industrial / storage areas on the ground floor and residential areas upstairs with some humble apartments, probably occupied by employees, and another one, whose bourgeois character indicates the occupation by the factory owner. All buildings – east, south and west – compose a U form.

The project responds to different functions organized into four sectors: 1) restaurant / cafeteria, on the west building’s ground floor, which can be used as an independent program if necessary; 2) UCCLA’s administrative area, placed at the south and west volumes; 3) CAL’s administrative area, located in the south building; 4) shared programs, namely the auditorium and the exhibition room, occupying the ground floor of both south and east (new one) buildings. The main entrance to the site is granted by a covered passage which connects Avenida da Índia to the interior garden around which the complex is organized.

From here it is possible to access the restaurant and both UCCLA and CAL’s receptions. Other entrances exist at Travessa dos Algarves, correspondong to former accesses to the apartments now changed into service entrances to the restaurant. Finally, new entrances are created at the east front, notedly from the parking area.

Placed in the older building of the site, at the west side, the restaurant has a capacity for up to 200 people. Inside, where the existing pavements and the missing arch are restored, the ceiling structure is left apparent, contributing to emphasize the tectonic character of this room. The restaurant also offers an esplanade area facing the south side of the garden. Both exhibition room and auditorium, used by UCCLA and CAL, may me function apart from the rest of the complex. To assure this, there is an entrance court from the parking area that allows independent access to these spaces beyond working hours.

The foyer – function assigned to the new constructed volume - is a sprawl space attached to both auditorium and exhibition room. Its contemporary image is provided by a wooden and glass structure that wraps up the whole east volume.

The UCCLA and CAL administrative areas are distributed along the facade, following a modular sequence fixed by the rhythm of the openings emplacement, using a compartment system that grants a flexible use of the space. Technical installations also relate to this module, taking advantage of the openings’ rhythm.

The project is meant to keep all existing elements of cultural relevance. The east constructions are preserved in order to protect the complex’s historical memory. This old storage space gives place to the auditorium - a multi functional space with 88 seats – where one can still see the existing wooden structure. Many technical aspects, namely acoustic ones, resulting from the option of safeguarding the existing volume, are solved by the use of wooden wall finishing (iroko planks).

In fact, wood plays an important role in establishing connections throughout the intervention, creating continuity between different parts of the complex, between old and new. Its use on floor and ceiling structures – glued laminated timber with national pinewood -, doors and window frames – iroko or red Scotch pine wood– floor planks and stairs – riga oak – spans the whole complex. Outside, the presence of wood in the glued laminated structure (Douglas fir) contributes to the new volume’s contemporary image. This structure also acts as a brise-soleil for the foyer.

In general, the project’s decisions lead to floor preservation – exception to the main stairs’ hall – and to the integration of new roofs.

The tiles project, from architects Catarina and Rita Almeida Negreiros, is one of the key elements of the intervention. It promotes the perception of this project as an intervention that calls for continuity instead of rupture.

The work developed in the south volume consists of coating its east, south and west’s facades. Knowing that the 19th century original tiles were only enough to cover a third of the facade, it was necessary to create new tiles based on a simplification of the original motif. This motif – a stamped pattern in a single tile – is decomposed by the isolation of one element of the original pattern in each of seven variants. New tiles can be distinguished from the original ones, reflecting its new production techniques.

Starting from a dense composition of original tiles, placed in the lower part of the facade, the arrangement of the seven new types of tiles creates an effect of dilution towards the top of the facade, where totally white tiles are used solely. 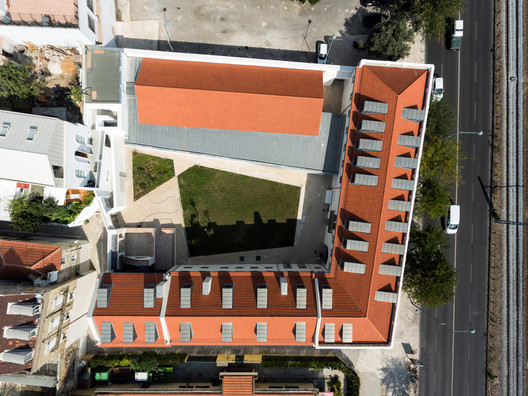