Save
What Will Thomas Heatherwick's "Vessel" At Hudson Yards Really Add to New York?
Share
Or
Copy

This article was originally published by The Architect's Newspaper as "What do New Yorkers get when privately-funded public art goes big?"

When Thomas Heatherwick—the nimble London-based designer known for work that defies easy categorization—unveiled his design for a new public landmark called Vessel at Hudson Yards to a crowd of reporters and New York City power players in September, questions abounded. What is it? What will it do to the neighborhood? And what does it say that Stephen Ross, the president and CEO of Related Companies, the primary developer of Hudson Yards, is financing the entire $250 million piece by himself?

It’s natural that Ross chose Heatherwick Studio to design his centerpiece, because the office’s creations stun. For the UK Pavilion at the 2010 Shanghai Expo, it extruded 60,000 clear acrylic tubes from a center space to create a fuzzy, crystalline object whose apparent fragility is as mesmerizing as it is clever. As the studio moves toward ever-larger and ever-more-public commissions, the people who will live with its work will need to seriously consider what it will mean for their neighborhoods and cities.

Interactive public art is plentiful, but there are no pieces with the built-in interactivity of Vessel. In Chicago, tourists snap selfies with Anish Kapoor’s parabolic Cloud Gate (the Bean), while at New York’s Astor Place visitors can now once again give Bernard Rosenthal’s Alamo (the Cube) a spin. Vessel is supposed to be to Hudson Yards what the Christmas tree is to Rockefeller Center, but on display all year round. Related said it’s a “new kind of public landmark,” while The New York Times called it “a stairway to nowhere.” Heatherwick referred to it as a “device.” Critics have been unable, or unwilling, to name it. There’s power in naming, so let’s call Vessel what it is—it is architecture. It fulfills the most basic criteria for the category: The piece serves a purpose and acts as an apparatus for the reorientation of the body in relationship to both the ground and the city.

Vessel’s 2,400 steps will anchor the largest private development in the U.S., lifting visitors above Hudson Yards’ 14 acres of parks and plazas. The elevations will give New Yorkers and tourists—siphoned off a to-be-constructed High Line spur—a place to view each other and all the stalagmitic towers of Hudson Yards. When complete, the 16-story structure will be the tallest freestanding observation platform in the city, at least until Staten Island’s New York Wheel starts rolling.

Formally, the piece is inspired by Indian stepwells, but according to Heatherwick, it’s a monument “to us.” Like Pier 55, the architect’s park on mushroom stilts on the lower west side, Vessel has instant visual currency—critics have compared it to a snakeskin teacup, honeycombs, bedbugs, and a döner kebab. For its creator, it’s a bespoke response to the globalized taste that plants boring glass curtain-wall towers in Shanghai and London and plops blue chip art on corporate plazas in Los Angeles and Chicago. Vessel is the antidote that nurtures a spirit of togetherness: “Buildings are getting bigger and bigger—that mega-scale, it’s something new,” Heatherwick told AN at the unveiling. “But 2,000 years ago, humans were mostly the same size we are now. The human scale stays true.” Like its creator, who the press has affectionately compared to Willy Wonka, Vessel is so earnest: Its intricate symmetry and aesthetics divorce the grand stair from a signal of power and prestige, while its ostensibly public nature decouples the ordinary stair from its floor-to-floor workaday obligation.

Underneath its sincerity, though, Vessel harbors serious contradictions. Heatherwick said it “has no commercial objective,” which is hard to buy when the structure is the ultimate native advertising: It will sit smack in the middle of a five-acre park in the eastern yard designed by Nelson Byrd Woltz, a jewel in a glittery crown. It puts Ross’s taste and design acumen on display for public admiration. As a gathering space, it’s intended to integrate the raw development—which sits on a crust of artificial land over its namesake rail yards—into the rich fabric of New York City.

A proper design narrative, rolled out by the mayor and a multiracial dance troupe from Alvin Ailey, paves the way for public acceptance and mental integration before the idea is built out. Who could argue with Heatherwick’s kumbaya, a campaign for one New York?

In a city where even the ultra-rich hustle in and out of the subway, Vessel elevates the time-honored art of the schlep to civic priority—sort of. Heatherwick said it has no prescribed meaning, and that it is up to the public to decide—a vote for radical spatial practice if there ever was one. There’s tremendous satisfaction, too, in hauling up a long set of set of stairs, our urban mountainsides. The whole-body high from ascending a tough trail, or emerging from the Lexington Avenue–63rd Street subway station, humbles screaming quads before God, gravity, and smart engineers. Heatherwick’s gift to the city of New York, defines a citizen-subject as one who can walk—a lot. In a promotional video for Hudson Yards, Heatherwick says “it’s extremely interactive, but properly,” slapping his torso and thighs, “using your physicality.”

On the surface, there’s a positive correlation between the healthy metropolis—a public ideal that New York embraces—and the fit citizen—a personal ideal. But we’re still far from health equity.

Sure, the piece will be ADA-compliant; curving elevators will sweep the wheelchair users, arthritic citizens, moms and dads with strollers, tired people, the very unathletic, and the time-crunched up to the top. For those of us fit enough to make it up even some of those steps, the terraces will form a bronzed steel beehive with neat new perspectives on the city. Flânerie never goes out of style, and in 2018 when Vessel opens, people will be watching other people on screens, too, documenting the fun on Instagram in a flurry of #Heatherwicks. Millennial employees of VaynerMedia, a Hudson Yards tenant, might use the thing as a StairMaster, and I predict there will be a Buzzfeed article on how to keep in shape with the new outdoor fitness structure. For his part, Heatherwick hopes that Vessel can be used for live performance, a dynamic and ostensibly more public forum than a Broadway theater or DS+R’s slick corporate Shed adjacent to Heatherwick’s piece. (So corporate, in fact, that “Culture” was removed from the name.)

However, even though initial renderings usually oversell the final product, Heatherwick’s visions are particularly egregious. Although the structure is being assembled right now, the renderings raise troubling questions about the gap between the not-architecture-but-still-architecture’s intended and probable uses.

As his Shanghai Expo pavilion, his redesigned Routemaster bus for London, and his 2012 Olympic cauldron demonstrate, Heatherwick is a master detailer and global designer adept at translating compelling human themes to local contexts. The Vessel model, which Ross reportedly kept under lock and key in his office, has been ready for months. Why then, at the public unveiling in September, were so many details missing?

Consider the crowds. Heatherwick’s piece is supposed to take the success of the High Line and spin it vertically. Though pioneering, the High Line has received justified criticism for its crowding and lack of surprises, but at least it gets you, slowly, from place to place (and, as art critic Jerry Saltz observed, it keeps tourists out of Chelsea’s galleries). If on nice days the High Line backs up, how will crowds be managed on a structure that only has egresses at its base? Heatherwick insists Vessel will be free to visit, but how besides timed and ticketed entry will the structure accommodate everyone?

If it’s as popular as its creators believe, Vessel will attract not only people but also those other New Yorkers: The pigeons. The structure seems ready-made for roosting, and I can’t imagine how hard it will be to properly enjoy Vessel while dodging dove turds. And in cold weather, I hope Ross will be more sedulous about de-icing the platforms than the neighbors on every block who make pedestrian booby traps out of sidewalks in front of their buildings.

As one climbs up Vessel, the railings stay just above waist height all the way up to the structure’s top, but when you build high, folks will jump. After a student leapt into the soaring central atrium of NYU’s Bobst Library seven years ago, the school installed metal fencing—on top of the Plexiglas barriers it had put in years earlier in response to other suicides. Philip Johnson and Richard Foster didn’t see the death in the design that the public’s morbid ideation uncovered, but Ross and Heatherwick seem not to have learned from Bobst, or from the city’s bridges and iconic tall buildings. If barriers are installed, how will they affect the views, Vessel’s main selling point?

Critics have compared Vessel to the Eiffel Tower, but Paris’s landmark is very much of its era, and meaning-making in our time has moved beyond tit-for-tat semiotics. New York has the Statue of Liberty, the Empire State Building, One World Trade Center, and any number of other symbols with which to broadcast its image. Plus, we’re on Instagram: Times Square is the world’s most-tagged location, more featured than the number-two tagged Eiffel Tower. There is already an essential New York space on a billion screens.

At this hour, there’s truly no point in reviving the perennial debate about the vacuousness of privately-owned-and-operated public space. The structure, surrounded on all sides by condos that start at $2 million, a Neiman Marcus, and a Thomas Keller restaurant, is a footnote in a city where politicians and developers plan expensive malls but call them transit hubs; where amateur urban planners like multimillionaire couple Barry Diller and Diane von Furstenberg, patrons of Heatherwick’s Pier 55, shape public priorities; and impressive but empty fortresses for billionaires jostle each other for space in the sky. In its size and ambition, Vessel feels significant in some way, but in contrast to the High Line’s renegotiation of the urban park, Vessel feels like a Gilded Age geegaw foisted on the city by a “benevolent” rich guy. 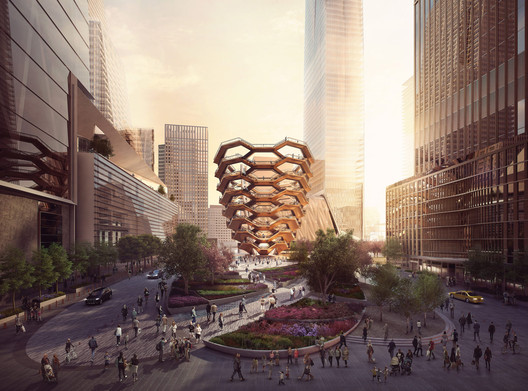