Renderings have been released for Hollwich Kushner’s first European project – Die Macherei, a new mixed-use business district based in Munich. Designed by the New York firm in collaboration with local practices msm meyer schmitz-morkramer and OSA Ochs Schmidhuber Architekten of Frankfurt/Cologne and Munich respectively, the financial hub will feature 64,000 square meters of rental space, bringing together offices, shops, dining experiences, a hotel and a gym.

“I could not be more excited to realize our first European project in my hometown. Designed not just as a series of buildings but as an exploration of the spaces between the buildings, Die Macherei is an innovative design for a new way of working and interacting, integrating social activity and behaviors to promote a sense of community,” expressed Matthias Holwich, principal at HWKN. 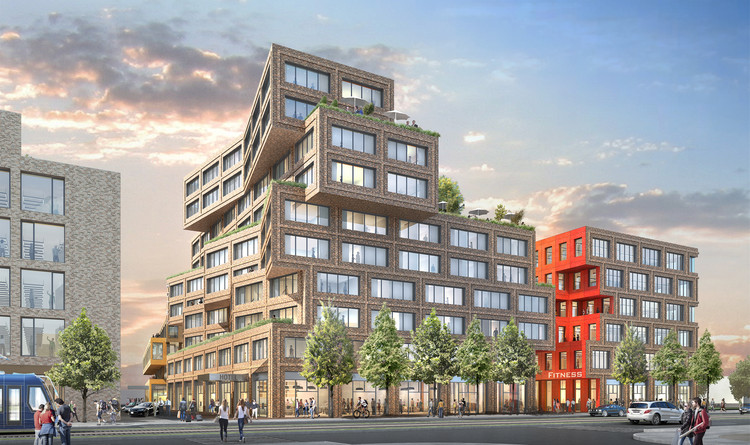 Of the six new interrelated buildings that will occupy the site, HWKN is behind the design of the hotel and two adjacent office buildings. Situated in the district’s east, the buildings opt for simplicity through the adoption of a uniform identity, which in turns adds emphasis to the various public spaces available to locals and visitors alike.

The hotel features an elevated bar and consists of a series of outdoor terraces offering views of the distant Alps, while the east office building accommodates a two-story gym. The third building extends to guide pedestrians towards Die Macherei’s public plaza, at the heart of the district.

With the loft-like proportions of the facade, the buildings portray an informality that puts people first, explain the architects.

Meanwhile, msm meyer schmitz-morkramer is responsible for the design of two buildings along Berg-am-Laimstraße, with offices and retail spaces, while OSA Ochs Schmidhuber hints at the materiality of former local brick kilns with its design of a 15,000 square meter incubator building, providing working spaces and conference rooms.

Construction is expected to continue until 2019, as the three practices work in collaboration with Munich developers Art-Invest Real Estate and Accumulata Immobilien.

OMA, in collaboration with local architects ECADI and landscape architects West 8, has developed a new mixed-use masterplan for Columbia Circle in the center of Shanghai. Layered with rich history, the site contains preserved colonial monuments, former industrial buildings and 1920's country club buildings by architect Elliott Hazzard - these elements will be renewed and transformed by the master plan to return Columbia Circle into one of Shanghai 's most prominent public spaces. 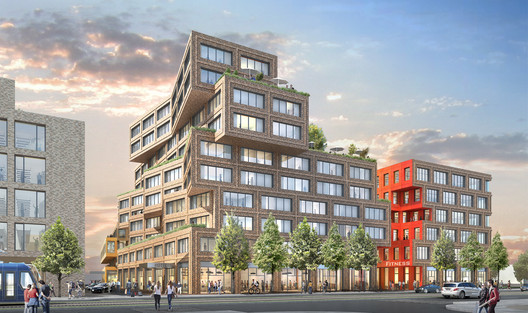