Known as one of the world’s grandest subway systems, the Moscow Metro is filled with materials more commonly associated with palaces or museums – marble and granite walls, bronze columns, and lavish chandeliers are just a few of the opulent textures you’ll find beneath the streets of Russia’s largest city.

Despite their renown, the Moscow government almost never allows professional photographers to capture the beauty of the stations. But in 2014, photographer David Burdney was finally given that opportunity. Visiting the system late at night after the metro had closed, Burdney was able to capture each station in its best light, and completely devoid of people.

Burdney’s original interest in the metro came from their unique role in Russian history. Know as “Palaces for the People,” the original metro stations opened in 1935 as an element of Communist propaganda. Employing the slogan “The whole country is building Metro,” leader Joseph Stalin enlisted nearly 75,000 workers to complete the system as a symbol of the government’s supposed care for its people.

Today, the Moscow Metro transports up to 9 million people daily through 200 stations. With several additional expansions in the works, the system is expected to become the world’s largest by 2020.

See more of Burdney’s work on his website, here.

14 From the architect. The city of Moscow experienced a huge size and population boom following the industrial development and railway construction of the late 19th century. At this time, horse-drawn cars and trams were the main form of transportation, but soon the horses were not enough to fuel the city's rapid expansion.

Strelka KB has announced two Russia-based design teams, Timur Bashkayev Architectural Bureau and BuroMoscow, as the winners of the design competition for two Moscow metro stations. The stations, Nizhniye Mnevnik and Terekhovo, are both located to the northwest of the capital.

When thinking of metro stations, the word quiet generally doesn't come to mind-with all of the train and pedestrian traffic, not only is noise produced in high quantities, but it is also echoed. With this issue in mind, London-based Variant Studio created their proposal for the competition to design the new Novoperedelkino station in Moscow, Russia.

Moscow-based architectural studio Nefa Architects ( Nefaresearch) have been chosen to redesign the Solntsevo metro station. Their project, which is designed to "create a solar spray effect" on the station's subterranean platform, won an international competition whose winners were ultimately chosen by Moscow 's citizens.

These Photographs Capture the Colorful Architecture of Europe's Metro Stations

Photographer Chris Forsyth has released the latest images from his photo series Metro. Having previously gone underground to capture the surreal beauty of Montreal's metro system, Forsyth traveled to Europe to shoot stations in Munich, Berlin and Stockholm. His photographic style portrays the stations in their best light - bright, clean, colorful and completely absent of people. 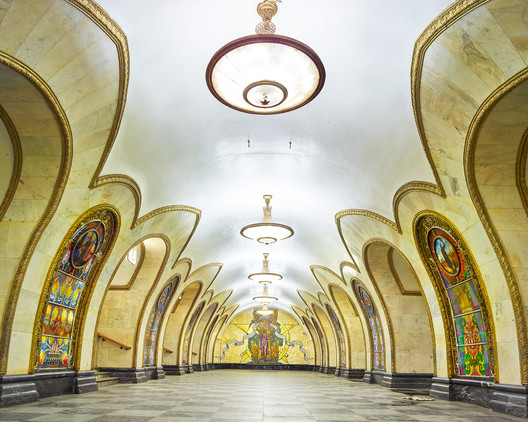