A 1,400-foot-tall mixed-use skyscraper by Zaha Hadid Architects may be the next supertall structure to hit midtown Manhattan. Located at 666 Fifth Avenue between 52nd and 53rd Street, the project is the brainchild of Kushner Properties, who currently co-own the existing 483-foot-tall building with Vornado Realty Trust.

Estimated to cost up to $12 billion, the company is currently negotiating a multi-billion dollar deal with Chinese holding company Anbang Insurance Group to finance the project. If plans to buy out the building go through, Kushner would be in the clear to begin construction on the ZHA-designed tower, which would rebrand the property as 660 Fifth Avenue and offer 464,000-square-feet of residential space, an 11-story hotel, and a 9-story retail podium.

Rather than starting from the ground up, the project would be realized by stripping the existing building down to its inner steel core, and then adding the necessary structure for an additional 40 floors. If completed, the tower would be located just a block from Atelier Jean Nouvel's 1,050-foot-tall 53 West 53rd Street, which is currently under construction.

For the project to take place, Kushner will need to buy out Vornado’s share of the building and the leases of current tenants, as well as refinance existing debt. If these deals are able to occur before the end of the year, demolition and construction work could begin as early as 2019, with an estimated completion following in 2025.

The World Now Has 100 Supertall Buildings

Following the recent completion of 432 Park Avenue in New York City, The Council on Tall Buildings and Urban Habitat (CTBUH) has announced that there are now 100 supertall (300-plus-meter) skyscrapers in the world. The majority of these skyscrapers are in Asia and the Middle East, mirroring construction trends that have emerged over the past decade. 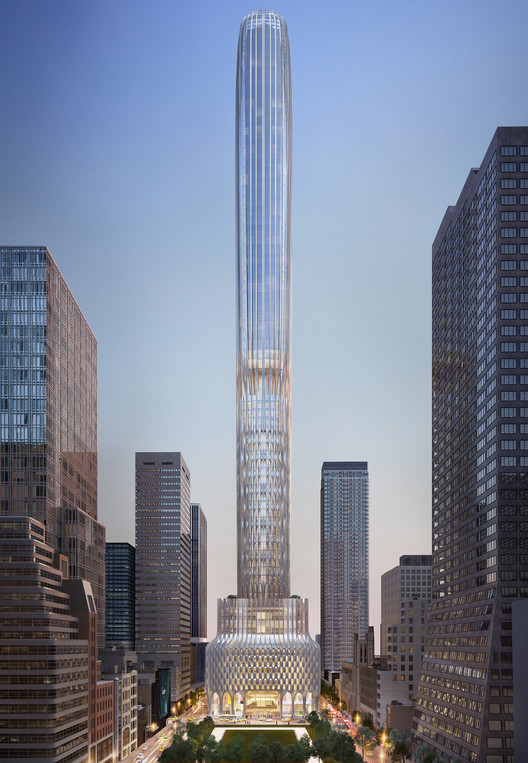