In the recently concluded Bandirma Park competition, TARI-Architects in collaboration with Derek Pirozzi Design Workshop LLC, were awarded third prize for their proposed revitalisation of the Turkish city’s ecological core. In light of the competition’s vision of Bandirma as a new innovative hub, the proposal by the two practices combines the central Design Institute with excavated public spaces to minimize the architecture’s footprint on the park and its context.

Under the acronym B.R.E.A.K., or "Bandirma Regeneration As Knowledge," the project’s focal point is the Design Institute – “an operation that will attract a large number of academic gatherings from the Turkish region for hosting exhibitions and research conferences” from its vantage point overlooking the city and harbor. 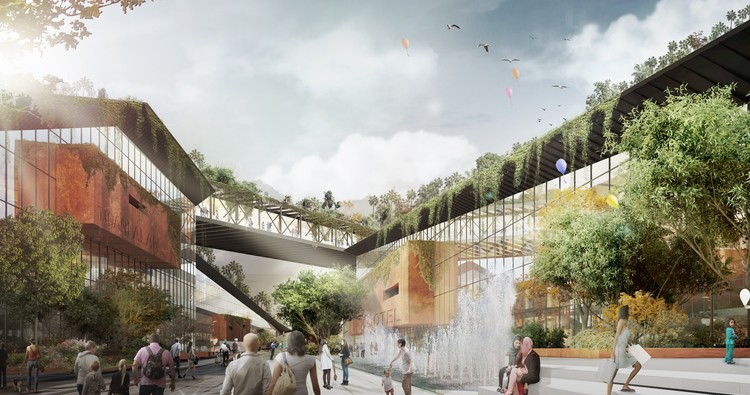 “B.R.E.A.K. is an urban heart, a center for the people, a landmark for the city and a symbol for environmentally sensitive resolution,” explain the design team in their project description.

In addition to the institute, the bulk of public programs are embedded within the landscape by means of canyon-like arteries which form connections between the existing neighboring urban context. The resulting public square hosts concerts, seasonal markets, and various exhibitions, while the carved axes serve as the park’s central commercial and retail area.

The design stems from the practices’ desire for an “architecture of humility,” which follows the natural characteristics of the land, minimizing the imposition of the manmade.

Celebrating social interaction and sustainability, the Bandirma Park proposal by TARI-Architects and Derek Pirozzi Design Workshop would offer a means of outdoor recreation, environmental education, and community engagement, coupled with passive design strategies and energy preservation. The proposal’s identity relies on the melding of traditional vernacular and contemporary Turkish ideals, in order to maintain cultural authenticity alongside new urban development.

See the winning proposal in the Bandirma Park competition here.