MVRDV has released plans for a major revitalization of a former US army barracks in the Franklin Mitte neighborhood of Mannheim, Germany. The 41-hectare site will feature a slate of mixed-typology developments organized around a central green hill made from demolished barrack buildings and offering panoramic views of the new developments. Of those new buildings, four residential towers spelling out the word H-O-M-E will create a vibrant community of professionals and young local families. 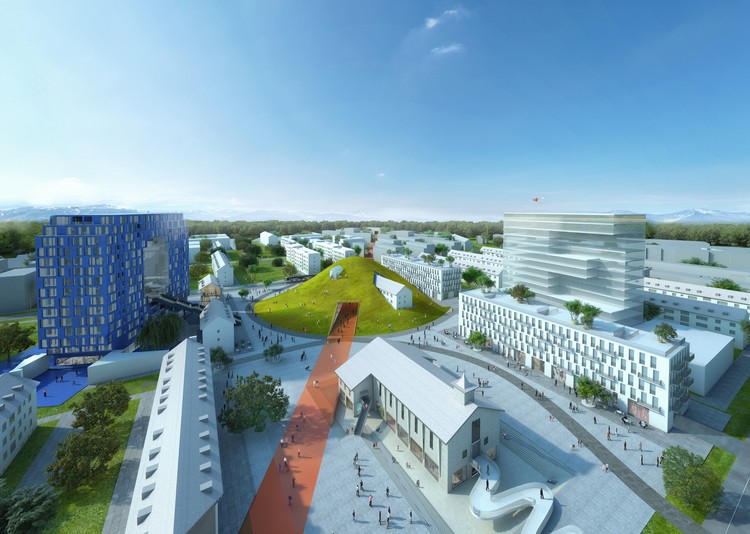 Built as a trading city in 1606, Mannheim has evolved to become an industrial center of Germany and later the home of a massive US army base. The closure of the 500-hectare base in 2011 caused an initial shock to the local economy, but has also provided a fresh opportunity for urban renewal. MVRDV has drawn from this history to create a new district that introduces density and diversity to the site, creating a community aimed at attracting young people who otherwise have been leaving the city due to lack of attractive options.

“With a series of investors a variety of typologies and interpretations of the past is celebrated. A primary axis (the Europa Achse)  cuts through the centre of the scheme, piercing through some of the old structures, whilst connecting the two surrounding nature areas and at the same time, creates transitions from old to new. ‘The Green Hill’ is the central icon of this revitalised neighbourhood, a park heart of the community for people to walk on, relax, a great panoramic look out onto the neighbourhood and its HOME towers,” says Winy Maas, founding partner of MVRDV.

Centered on a central axis linking the various buildings of the district, the hill serves as a focal point connecting residential and commercial areas. The primary axis is articulated in the building, piercing through old barrack structures and creating transitions between the old and new.

“How does one form a family of residential towers? says Maas, ‘In Franklin Mitte’, we will create a fine-grained extremely homely and cosy neighbourhood with a central hill that is both a park and shopping centre. The HOME towers signal a welcoming suggestion. Especially needed in these days of doubt. Mannheim is an ambitious city with a strong social agenda, the site is currently occupied by 10,000 refugees, I find that impressive and to be honest, quite touching.’’

The scheme’s four main residential towers take the form of the letters H-O-M-E, shapes that could provide the required amount of housing needed, and serve as a literal and symbolic billboard for the neighborhood.

“Around each building is a plaza created in the shape of the projected shadow of the letter, its size determined by local regulations that call for a certain distance between neighbouring buildings,” MVRDV explains. “This imprint of the letter cuts through both old and new buildings, juxtaposing the site’s rigid history with these contemporary structures.”

MVRDV has been tasked with detailing the ‘M’ and the ‘O’ buildings, while haascookzemmrich STUDIO2050 will design the ‘H’ and AS&P (Albert Speer & Partner) the ‘E’. The ‘O’ will contain 12,380 square meters shared among 120 flexible apartments and a public stage for community engagement. Nearby, the ‘M’ will contain 17,890 square meters in 185 apartments, and an activated roof terrace featuring tennis courts and public space.

The brightly-colored ‘HOME’ buildings will stand out against the neutral tones of the neighborhood, allowing each structure to take on its own identity while contributing to the overall community spirit. The towers are orientated around the hill with a rotation towards the ‘Vogelstang’ district and the highway which allows readability from a distance.

The transformation of Franklin Mitte is the latest project in Germany by MVRDV, following the the Expo 2000 Netherlands Pavilion, the private residence Barcode House and the mixed-use UPV offices in Munich. MVRDV is currently designing further projects in Mannheim, Munich, Hamburg and Mainz. 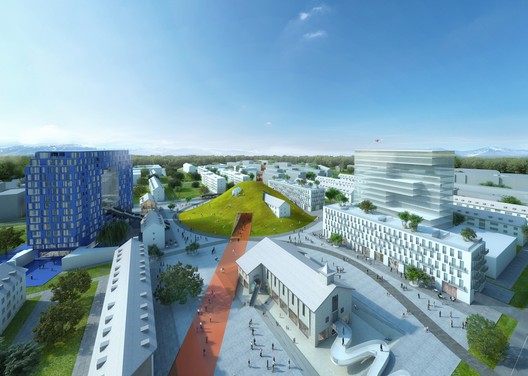