In the city of Belén, Chile, as a part of the second phase of a Training Program for the Restoration of Facades in Belén, two historically important structures were recently completely restored. The project was financed by the Regional Government of Arica and Parinacota and SUBDERE (Undersecretariat of Regional and Administrative Development), in partnership with the Altiplano Foundation.

In both houses, the foundations and, where necessary, the walls were reinforced, and the traditional Andean roof and existing carpentry was restored. Notably, the structural reinforcement of the adobe walls used a rope mesh system, which was first seen in Chile in 2014 as part of the restoration of a church in San Pedro de Atacama. 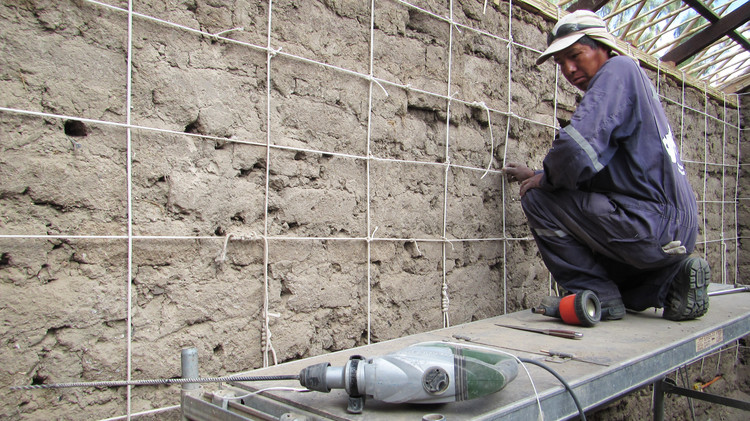 The rope reinforcement emerged in 2013 thanks to research carried out by a team of engineers from the Catholic University of Peru, led by Engineer Julio Vargas Neumann. Despite evidence of pre-Colombian examples in which ropes were used to reinforce earth structures, the technique wasn’t used until the year 1970, after the tragic earthquake of Huaraz in Peru. A team of professionals began to research a method to reinforce adobe structures and, above all, guarantee the lives of the inhabitants of adobe homes—a construction technique which is very common in that part of Peru, as well as in several areas of Central and South America.

The system comprises a system of ropes that envelop the walls vertically and horizontally, at distances that are related to the size of the adobe bricks, forming a mesh that prevents the walls of the building from collapsing in the event of a large earthquake. Both the vertical and horizontal ropes are lashed and tightened, improving the wall’s ability to resist an earthquake. While there are already several examples of reinforced adobe constructions in Chile—for example with welded steel mesh—the use of rope has certain advantages over that type of reinforcement, including its cheap and readily-available material and the fact that they not only prevent collapse, but also improve the behavior of the structure during an earthquake.

One of the houses in the village of Belén being restored is a 125-square-meter adobe dwelling with walls 50 centimeters thick, with a stone foundation and a collar beam roof. The building is estimated to have been built 300 years ago and it functioned as the office of the village's judge.

This innovation in the structural reinforcement of adobe buildings was made possible thanks to the experience gained by the Altiplano Foundation in the restoration of the church of San Pedro de Atacama, and to the advice offered by Engineer Julio Vargas Neumann.

In Chile, there are adobe constructions throughout the country, including in Patagonia. The cities and towns in the center of the country were mainly built with this system of construction. In the north of Chile, especially the towns that are located in the pre-mountain range and high plateau, this technique was also common. Today, many families live in adobe houses. That, combined with Chile's seismic activity, makes reinforcement using rope an innovative and feasible alternative not only to protect the lives of those living in such structures but also to preserve the heritage of different construction cultures present in the country, as well as cultivating traditional crafts that are often said to be forgotten.

Text by Camilo Giribas, Architect at the Altiplano Foundation.