Besides the kitchen, the bathroom often takes top priority when building or renovating a home. However, choosing a look is not always easy, so here we have gathered 13 stunning bathrooms from previously published projects to provide inspiration in your own designs. Each is filled with inspiring ideas for your own project; from relaxing tubs to sleek showers, one of these bathrooms is sure to suit your style.

The first steps in the evolution of the physical space of the bathroom that we know of today occurred in Scotland, where the first rustic latrines were constructed, and in Pakistan, where systems of pipes of cooked mud embedded in brick constructions have been found. These innovations date back to 3000 BC, later evolving into the first vats, toilets and ceramic pipes of the Minoan nobility, then to the copper plumbing of the Egyptians (who used their baths to celebrate religious ceremonies), then to the Romans, who transformed personal hygiene into a social act with public baths, covered with tiles.

During the middle ages, a widespread lack of concern for hygiene arose, but plumbing systems resurfaced in the early seventeenth century - although some of this era's most impressive constructions, such as the palace of Versailles, did not include bathrooms. The early industrial revolution in England also did not contribute much, since the rapidity of urbanization and industrialization caused an overcrowding that was very difficult to control. It was only in the 1830s that an outbreak of cholera in London forced the authorities to launch a campaign to incorporate sanitary facilities into homes, taking the first step towards the toilets with cisterns that we use today.

Today the bathroom as a space has gone beyond its purely hygienic function and has entered into an exclusive area of its own design. Now, regardless of whether you are a bath person or strictly a shower person, these 13 awe-inducing bathrooms take daily cleansing to a whole new level.

Need more inspiration? Check out our Pinterest bathroom board, and remember you can find all the latest materials by checking out our Product Catalog. 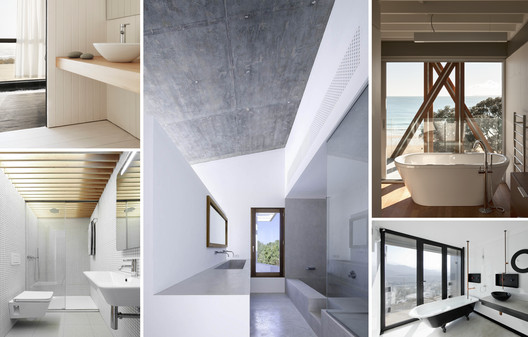