Save
Inside the Murphy House, RIBA's 2016 House of the Year

Last week, Richard Murphy Architects’ ‘Murphy House’ in Edinburgh was named the Royal Institute of British Architects’ 2016 RIBA House of the Year. Built into a hillside lot, the unusual site presented the architects with the opportunity to play, loading the house with an assortment of clever architectural details and mechanics, including a hidden bath in the master bedroom, folding walls, sliding bookshelf ladders and operable clerestory panels.

To capture all these moving parts in their full effect, the architect himself created a video walkthrough of the house. Check it out below.

The design of five-story house was inspired by the work of 20th century Italian architect Carlo Scarpa, known for his own finely crafted, playful details in building such as Brion Cemetery, Fondazione Querini Stampalia, and the Olivetti Showroom in Venice.

The House of the Year judges were charmed by the house’s ability to blend surprises with beautiful craftsmanship.

"Murphy House was a real box of tricks with a unique, playful character,” commented judge Philip Thorn from Hiscox.

“Although a small property, it was deceivingly large inside due to the clever use of space. Every room contained a surprise and the attention to detail was exceptional. The roof terrace was a real oasis of calm and I loved the long list of environmentally friendly touches. A true pleasure to visit and I would imagine a lot of fun to live in."

“The Murphy House is this year’s best example of how to overcome challenging constraints – from planning restrictions and an awkward site in an urban location - to build a stunning house. Plus the architect overcame one of the biggest obstacles: a demanding client – himself!” added RIBA President Jane Duncan.

“Nearly a decade in the making, this house is a true labour of love for Richard. Part jigsaw puzzle, with its hidden and unexpected spaces, and part Wallace and Gromit with its moving pieces and disappearing walls, this is a model house of pure perfection and a worthy winner of the RIBA House of the Year 2016.”

Selected from a 20-strong longlist, the full shortlist for the 2016 RIBA House of the Year award included:

You can read more about the award, here. 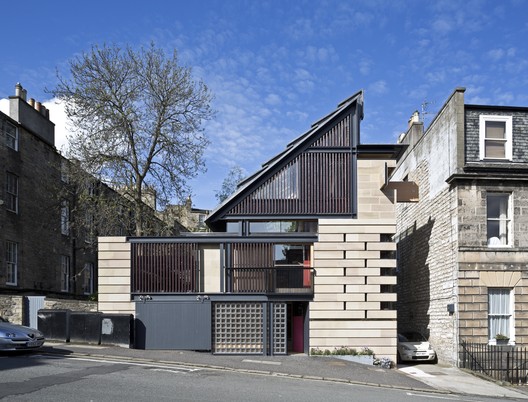