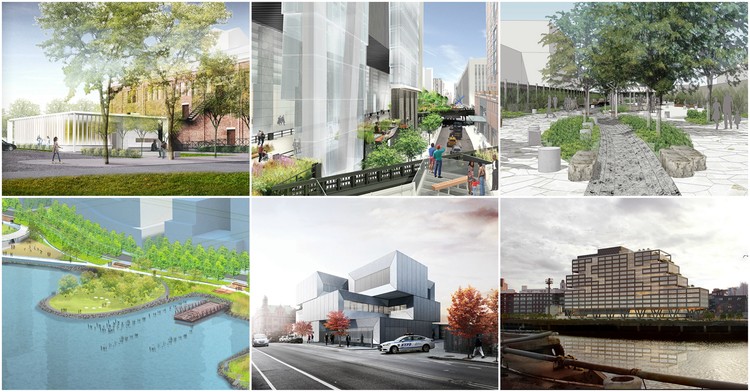 Added Public Design Commission Executive Director Justin Moore: "Part of what makes our city great is the quality of our public realm and the creativity and ingenuity found in our design community and city agencies. These award-winning projects range from new technologies to improved neighborhood parks and public artwork. They show that design excellence is an important part of New York's leadership in promoting innovation, sustainability, and equity in cities."

Located in the South Bronx, this new station house reinforces a commitment to serving the surrounding communities of Port Morris, Melrose, and Mott Haven while meeting the complex programmatic requirements of the New York City Police Department. The building's unique form comprises stacked volumes that spiral around a central atrium, visually connecting interior spaces and bringing in daylight from a rooftop clerestory. The facade alternates between solid perimeter walls and glazed reentrant corners, providing security while also affording light and views.

George Trakas' Waterfront Nature Walk is located along Newtown Creek and Whale Creek, adjacent to the Newtown Creek Water Pollution Control Plant in Greenpoint. Envisioned as a critical component of the awarded master plan for the Department of Environmental Protection's plant, the Waterfront Nature Walk revives a long-inaccessible industrial shoreline for public use as a waterfront promenade and kayak launch.

Nestled between the edge of a residential neighborhood and the working industrial waterfront of Staten Island's north shore, this deteriorated site will be transformed into an attractive community asset with a pier that provides expansive views to the Kill van Kull and the Bayonne Bridge.

Set within the curved landscape of the Hunters Point South Peninsula lawn along the East River, these seven sculptures are both beautiful and educational. A phosphorescent material integrated into the surface of each domed shape absorbs sunlight during the day and illuminates the phases of the moon at night with a soft blue glow. Placed at an overlook, the sculptures offer visitors the opportunity to contemplate the many influences of the moon - from its mystical and poetic powers to its physical gravitational pull on the river's tidal rhythm.

Dock 72 embraces rapidly emerging technological and creative industries in Brooklyn with a work environment that encourages and enables hundreds of new and maturing creative startups to flourish. The building's design celebrates the maritime and industrial history of the Brooklyn Navy Yard while providing 21st-century shared work spaces that allow tenants to contribute to the Yard's renewed life as a growing industrial hub.

The last segments of the High Line to open to the public, the Passage and Spur will become the northern gateway to this internationally loved elevated promenade. The Passage weaves through Hudson Yards' south tower, which cantilevers 60 feet above the High Line. To celebrate this cathedral-like space, the design remains open and minimal, with seating along the north edge and planting, social spaces, and balconies at the southern edge.

This understated yet elegant addition will provide critical support spaces for the Snug Harbor Music Hall, which was completed in 1892 and is the second oldest theater in New York City. The new structure is nested carefully between two of the original pilasters on the east facade of the historic building. Modest in scale, with one floor below grade, the design achieves a sense of presence through formal expression - deep overhangs at the entrances recall the portico of the Music Hall - and materials such as white board-formed textured concrete, glass, and steel.

The renovation of this under-utilized open space will establish a distinct gateway to the thriving hub of Hudson Square. The design derives its patterns and materiality from the area's history as a printing district, while providing a variety of pathways, gathering areas, and seating to allow for diverse contemporary use of the site.

Aligning with the sustainable goals of OneNYC, these anti-idling pedestals will reduce ambulance vehicle emissions without disrupting the Fire Department's critical emergency operations. By plugging in to these curbside pedestals, EMTs can safely shut off their engines while keeping their communication systems live and temperature-sensitive medicines refrigerated.

LinkNYC is a new telecommunications network replacing old payphones with Links that benefit the public - especially those of limited means - by offering free services such as high-speed Wi-Fi, mobile device charging, and a custom-built tablet that enables free telephone calls within the United States and provides access to City information and services in addition to wayfinding.

Rooted in the idea that the design of the public realm - streets, sidewalks, and open spaces - should be cohesive and integrated, Parks Without Borders aims to improve the interface between New York City parks and their surrounding neighborhoods. As part of OneNYC, this initiative aims to make parks more welcoming, accessible, and active. Each design concept will begin at the park edge, with lowered fences and gates, wider and more porous entrances, and improved sightlines into the park.

Through the Community Parks Initiative (CPI), The Department of Parks & Recreation is strengthening New York City's network of parks and public space in historically under-served, high-poverty, densely populated and growing neighborhoods. Part of OneNYC, this multi-faceted capital program reimagines the smaller public parks that people use every day.