Save
See The Engineering Behind This Floating, Award-Winning Stone Helical Stair
Share
Or
Copy

Helical staircases are often designed to be show-stoppers, focal points of architectural spaces that are intended to impress. But even compared to its eye-catching peers, this staircase developed by Webb Yates Engineers and The Stonemasonry Company is unusually audacious. Developed for a residential design by RAL Architects in Formby, UK, each step of the two-story, 4.6-meter diameter helical staircase is composed of an individual block of stone, giving an impression of weightlessness as the structure circles its way up through the building's atrium towards the glazed roof above. For their efforts, Webb Yates recently won the Award for Small Projects at the Institution of Structural Engineers' 2016 Structural Awards, whose judges said that they were "amazed by the grace and audacity" of the design. Read on to find out how Webb Yates achieved this feat of engineering. 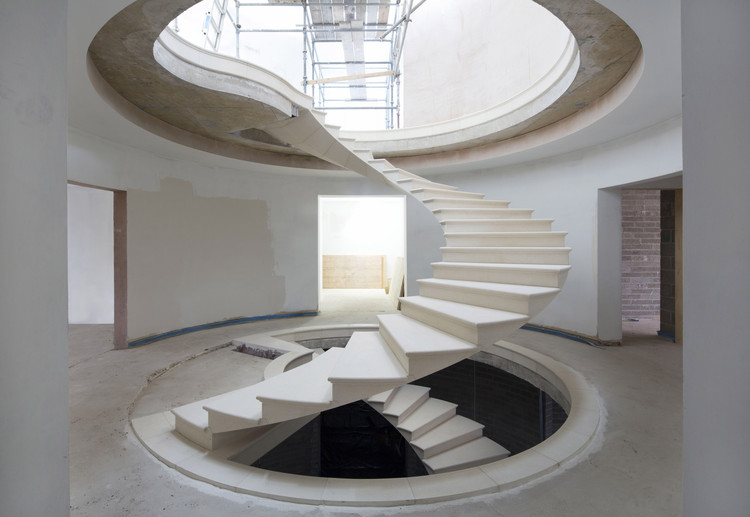 The key to achieving the design was two 12.9-millimeter steel cables running through the center of the stairs. After all the stone steps were in place, these cables were post-tensioned to a load of 150 kilonewtons. However, while this may sound like a simple answer, the truth is anything but: "Straight post-tensioned stone stairs are a common design with the structural analysis being similar to that of post-tensioned concrete beams or slabs, a construction method which is well documented and codified," explains Webb Yates in a press release.

"To post-tension a stone stair to sweep through 320 degrees is a much more complicated problem and requires full 3D modeling and analysis of the stone as well as a complete understanding of the structural principles at work. It was realized early on that the stresses the stone was subjected to were too complicated to analyse with simple 1D or 2D finite element models so a full 3D model was constructed using Rhino and Grasshopper scripting to generate the complex shape of each tread and the mortar joints between. The stair works in both bending and torsion simultaneously and the joints are prone to cracking or slipping if the frictional resistance is not high enough. In addition to this, the strength of the material used is direction-dependant so the exact direction and nature of each stress the treads are subjected to is very important."

To decrease the vertical load on the stairs—and simultaneously to make the stairs appear more slender and graceful—the steps were profiled to be more slender at the edges, with a thicker "spine" running up the center. This decreased the weight of the stairs (to a mere 150 kilograms per step) and directed most of the load through the central spine, where the post-tensioning cables are located.

In order to ensure the success of the design, Webb Yates even constructed a model at 70% of full size running through a 180-degree turn, which was then tested to destruction. As they put it in their press release, "in order to push the engineering design as far as we could, we needed to test the stone to its limits."

Once the design was set, The Stonemasonry Company cut the stairs from 2D CAD templates in 4 weeks. On-site installation of the stairs took 8 weeks, including the construction and removal of the temporary blockwork wall that held the stone in place until post-tensioning.

For Webb Yates, constructing the stairs in solid stone was more than just an exercise in pushing engineering to its limits, however. Had the structure been created in steel or concrete, they argue, the embodied energy of the staircase would be much higher, making stone the environmentally friendly option. And, while it may have been possible to construct the staircase in another material and clad it in stone, this would have required much higher stone-cutting costs and much more time on site, making a solid stone design the economical option too. 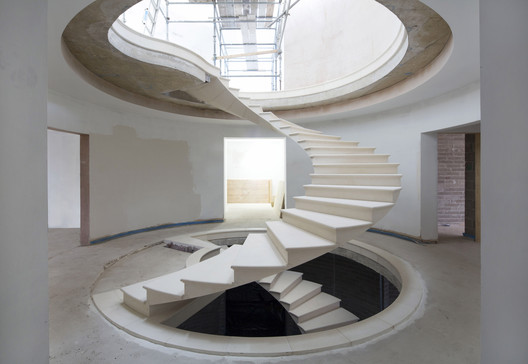