Save
This New Drawing App Shows How Digital Software Will Save Sketching, Not Destroy It

Mental Canvas is not the first software that attempts to save the act of sketching--we have seen 3D "sketching" tools such as SketchUp, as well as applications that simply simulate sketching on paper, such as Morpholio's popular range of sketching apps. But what makes Mental Canvas revolutionary is that you have the ability to sketch freely in a three-dimensional space without the constraints of traditional CAD modelling; it’s what Julie Dorsey, founder of Mental Canvas, calls a "graphical media"; not fully flat but not fully 3D. The software will be released later this year on Microsoft Surface devices, including the recently announced Surface Studio, working with the hardware of the Surface computers and the Surface Dial to provide a natural sketching experience on a virtual canvas. 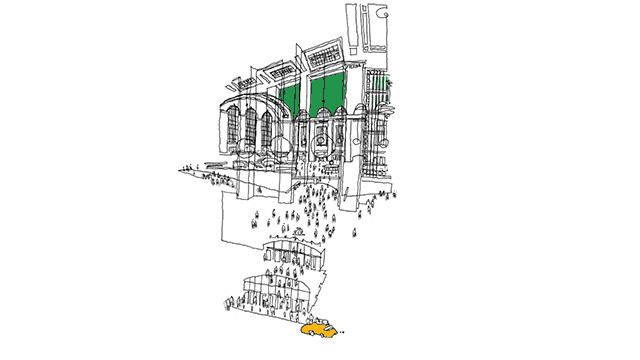 The central premise of Mental Canvas is that the designer draws on individual transparent canvases in an infinite space, which can be combined simultaneously in order to provide a three dimensional experience that is still very organic. Strokes on a canvas can be projected into space, automatically creating a new canvas, and entire canvases can also be rotated in relation to each other to create a desired illustration. What separates Mental Canvas from a sketch with pencil on paper is that is can be viewed from multiple angles, pulling the viewer through a scene that tells a more compelling story. On the other hand, what separates it from our usual 3D modelling software is its ease and fluidity, as Julie Dorsey explains:

[CAD modelling] comes at a cost. The cost is that one, you have to have a fully resolved three-dimensional model, even if it’s just a cube; second it’s very hard to edit a CAD model, it’s not fast and fluid like a sketch. At any given moment when you’re sketching, the designer or artist has full control over everything in that representation, but with a CAD model, that’s defined by the computer.

The endless white backdrop that makes up Mental Canvas may feel intimidating at first, lacking the safety of architectural scales that come with most CAD modelling software, or an ordinary piece of paper. However this infinite space has been created with the intention of liberating the architect or designer from the constraints of a computer, says Dorsey:

What we’re really going for here is freedom. We don’t want the computer to get in the way; it’s really up to the designer to set the scale. When you draw on Mental Canvas, you really have an infinite canvas so you can keep going in any direction, and we really did that by design. It doesn’t feel like you’re being limited; it’s like sketching unbounded.

In addition to the version scheduled to be released later this year, the Mental Canvas team is also working on a version for a research project that allows the user to place photographs of an architectural site, or mapped data to act as a backdrop for sketching, in effect implying a scale. This process of adding, adapting and changing is really at the core of the software, and is what Dorsey thinks will appeal to clients:

What an architectural client would like about this is that they can see possibilities here. The beauty of architectural design is possibilities, and that if you want to, at any given time, look at a design, you see more and are able to add to it.

A scene that is sketched on the Mental Canvas can be turned into a guided tour with a "Bookmark" tool that allows you to save a series of scenes that can be replayed in a particular order (try exploring this scene sketched by Carol Hsiung, by clicking the play button on the top left corner). These "tours" can be shared with any device that has access to a web browser, making it incredibly easy to hand over drawings to a client, as well as to adapt and change those drawings at a much faster speed than ever before. Carol Hsiung, Senior Designer at FXFOWLE and one of the first architects to test the software, vouches for Mental Canvas’s communicative value:

Hsiung, as many architects, started her journey in the profession due to her love of drawing and says that Mental Canvas made her fall "in love with my drawing again, because it allowed me to see my drawing in a new way." Hsiung adds that the power of sketching comes with its ability to tell a story, or convey a meaning in a way that CAD models and words can’t. "When you’re working in architecture at a big firm like [FXFOWLE], there are a lot of designers and not a lot of time, so in order to help everyone understand and get on the same page with the design, you draw," she says. "When you’re in a meeting, the person who draws and sketches can help to communicate the idea and I think Mental Canvas has power in doing that."

Part of the ease of drawing with Mental Canvas is a result of the carefully engineered relationship between the software and hardware of the Surface devices and Dial. Julie Dorsey explains that the design is intended for users to work with the Dial in one hand and the pen in the other, allowing for changes in color or pen width to be executed without ever having to move your focus from the drawing:

As an architect, Mental Canvas is really about allowing you to be immersed in the design and drawing process. Dial plus pen, with the onscreen experience of the Dial, means that you can really focus on just drawing. It frees the designer from having to do lots of interactions with tools.

Mental Canvas essentially frees the architect from having to create an entire model in order to illustrate a space, but rather allows for the sketching of separate views to communicate a holistic concept. As Carol Hsiung puts it, "You can show this to your clients, people who don’t understand two-dimensional drawings, and they can kind of feel it." Emphasising this point, Julie Dorsey uses an example of the importance of sketching:

One of the firms worldwide that makes the biggest use of computation is Gehry and Partners. What’s interesting is that if you go to Frank Gehry’s website the first thing that you see isn’t a CAD model, what you see is a sketch. You can see more in one of Frank Gehry’s sketches than you can see in any CAD model, I would contend.

Architects, designers, illustrators and clients: you have a lot to look forward to.