Save
Sin City Embellishment: Expressive or Kitsch?
Share
Or
Copy 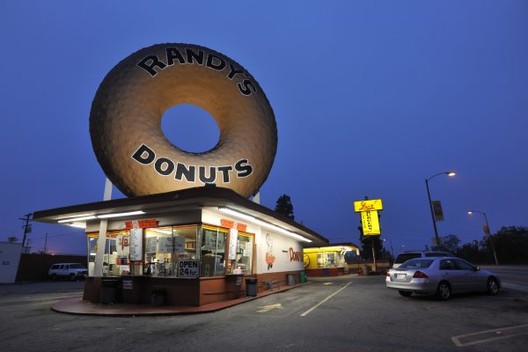 Venturi and Scott-Brown developed their terminology after studying the Las Vegas Strip over the late 1960s and early 1970s, inspired by the exaggerated incorporation of decoration in the city’s skyline. A “duck” is defined as: “where the architectural systems of space, structure, and program are submerged and distorted by an overall symbolic form.” They took inspiration from an actual duck-shaped building called the Big Duck, where one could buy ducks and duck eggs, making it obvious to passers-by what they would find inside. A “decorated shed” on the other hand, is “where systems of space and structure are directly at the service of program, and ornament is applied independently.” That is what Venturi and Scott-Brown advocated.

One of their most well-known buildings is the Guild House, completed in 1963, implemented symbolism and historical references, and came to be an early example of Postmodern architecture. The Guild House was built for elderly residents, featuring Classical orders and structure-specific signage implemented in the façade. Most famous is the golden antenna placed on the roof to symbolize the most popular pastime of the building’s inhabitants: watching television. However, this ornament was later removed.

Venturi and Scott-Brown’s criticism towards the “duck” approach was that by “rejecting explicit frivolous appliqué ornament” this Modernist architecture “has distorted the whole building into one big ornament.” Critics have challenged their “duck”-“decorated shed” duality ever since it emerged in the architectural discipline, however, this challenge of ornamentation in contemporary architecture remains. Is minimalism really so far from the dreaded “duck”? Kohlstedt argues that both are examples of “form follows function”, albeit that the “duck” is taking it to extremes.