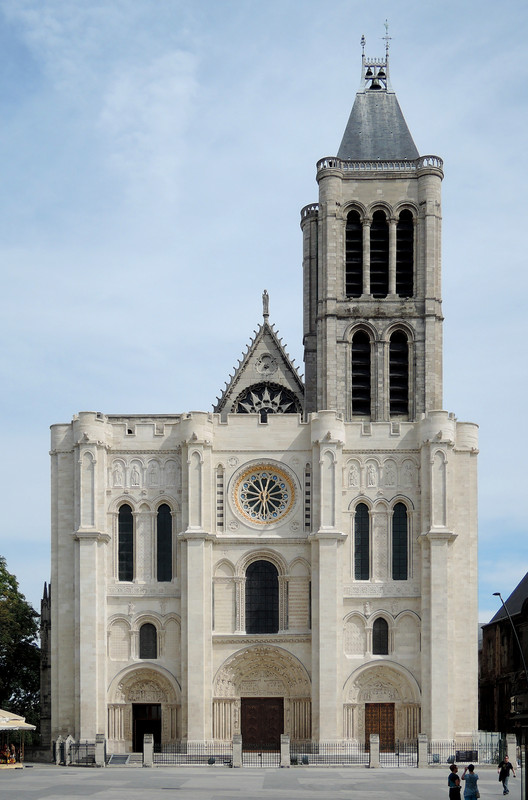 Saint Denis of Paris became established as the patron saint of the Frankish people (a group of people who occupied what is now known as France) by the 7th Century. In the 3rd Century, Denis, along with two companions, was sent to Paris by Pope Fabian as a missionary, and was subsequently martyred by the Roman Emperor Decius.[1] Legend holds that after his decapitation, Denis’ body carried his head to the site of the town and church that now bear his name. The village was well-established before the Frankish King Dagobert established an abbey there in the 7th Century, but generous gifts from both Royal patrons and droves of pilgrims greatly elevated its status in both the Catholic Church and the Kingdom of France. Despite the abbey’s significance, however, it would not be altered in any meaningful way for half a millennium.[2]

In 1122 Suger became Abbot of Saint-Denis at a time when the abbey itself was badly in need of renovation. The wooden Basilica, having both been a symbol (and necropolis) of Merovingian, Carolingian, and Capetian French rulers and housing relics from the Passion itself, was too small to accommodate the crowds of pilgrims it drew during feasts and festivals.[3] Saint Denis himself had also recently been ordained as the official patron saint of France by King Louis VI, affording even greater emphasis on the abbey which bore his name. Unfortunately for Suger’s ambitions, he could not simply demolish the old church to make way for the new – it was widely believed to have been consecrated by Jesus Christ himself.[4]

The first element of Saint-Denis to be rebuilt was the western façade. Two key imperatives drove this decision. Firstly, the façade was seen as the least sacred portion of the old basilica; its redesign and reconstruction could therefore be accomplished with a minimum of resistance. Despite its being the least “holy” part of the church, however, it was through the western façade and its doors that visitors would have to pass in order to enter the building. It therefore followed that this face of the building would be the first that most pilgrims would see – their first impression of the abbey, then, would be that of Suger’s comparatively contemporary addition.[5]

Work on the western façade commenced in 1135, proceeding under two different Master Masons in the following five years. A series of “trios” in the design referenced the Holy Trinity: three doors, three vertical strata, and several groups of triple arches form the lower portion of the façade. The division between this lower portion and the two towers that rose above was demarcated by crenellations. While crenellations were a defensive feature atypical for a religious structure, their inclusion here was more a symbolic reference to the New Jerusalem of the Book of Revelations than it was a practical fortification (Suger’s willingness to use it as such in case of an emergency notwithstanding).[6,7]

As was custom for French churches, a pair of towers flanked the central portal below. Although both were planned under Suger’s abbacy, only the southern tower was completed in his lifetime. Its taller northern counterpart, completed by one of his successors, did not fare well through history: it was rebuilt twice, due to lightning strikes in both 1219 and 1837. The latter of these efforts, led by architect François Debret, was handled so incompetently that the tower had to be completely dismantled in 1846. This deconstruction left Saint-Denis as it is today, with a single, southern tower – as it was during the time of Suger himself.[8]

When the new western façade was dedicated in June of 1140, attention turned to the far end of the church building. The façade, despite its updates, was essentially Romanesque and introduced no particular stylistic innovations; it was in the choir and chevet (eastern end) that the abbey church would begin to codify a new architectural style. This innovation resulted from Suger’s fascination with light as another reference to the New Jerusalem, which is vividly described as appearing to be built of glittering gems and gold that is clear as glass. It was this glowing architectural image which Suger strove to express in his abbey, a feat that he determined to accomplish through lavish use of stained glass.[9]

The need to allow for easy circulation of pilgrims, and Suger’s desire to dematerialize the heavy stone masonry with enormous stained glass windows, required a method of structural support that ran counter to the thick, heavy construction of Romanesque churches. The solution was to replace the deep walls that typically separated the small chapels at the church’s eastern end with slender columns – architectural features which, coincidentally, emulated similar columns in the 8th Century nave. Rib vaults forming pointed arches supported the ceiling, allowing for an unprecedented openness in the double ambulatory of the chevet that also permitted a virtually uninterrupted view of the stained glass that filled the majority of the wall space.[10]

It is important to note that the structural innovations employed in the chevet—the pointed arch, the flying buttress, and the vault rib—were not originally invented for Saint-Denis itself. These techniques, which offered greater structural integrity and adaptability, had been available to Romanesque architects who subtly employed one or the other in various buildings long before Suger. The significance of Saint-Denis, then, was not that its master builders pioneered these forms of construction; it was simply the first time that they were used together with the intention of creating a markedly different effect than that which prevailed in the abbey’s Romanesque contemporaries. In combining these pre-existing threads into a unified architectural logic, Suger and his architects built the earliest example of what would eventually become known as the (French) Gothic style of building.[11]

The completion of the western and eastern ends of the abbey church left only the Carolingian nave to be rebuilt. Unfortunately for his grand project, Suger was forced to turn his attention to matters of state when King Louis VII, who had departed to join the Second Crusade, appointed him to serve as the Regent of France. With Suger’s focus elsewhere, construction on Saint-Denis slowed to a crawl, and only the foundations of the new nave were completed when the abbot died in 1151. For eighty years, the abbey church remained an awkward, eclectic hybrid of architectural styles. Work resumed on the nave in 1231, a project that included reconstruction of the upper works of the choir in order to ensure a relatively unified aesthetic. The nave, as completed in 1281, was as innovative as the chevet that preceded it: its massive windows and slender masonry typified the Rayonnant Gothic style, again establishing Saint-Denis as the example to follow for sacred spaces across Europe.[12.13]

Very little of the abbey church changed after the 13th Century. Its accessory structures were rebuilt between 1701 and 1781, but the church itself was allowed to remain much as it had been since 1281. As a Catholic abbey, Saint-Denis was unfortunately a victim of the French Revolution’s rebellion against the church: its lead roofing was stripped away, its royal tombs desecrated, and its innovative sanctuary put to ignominious use as grain storage. The former abbey’s salvation came at the hands of Napoléon Bonaparte, who appointed François Debret to restore the church to its former glory for service as his family mausoleum. Debret, who worked more as a decorator than an historian, did not restore the church so much as create a general air of medievalism. His failures at structural restoration, which led to the aforementioned dismantling of the north tower, led to his resignation and replacement with Eugène-Emmanuel Viollet-le-Duc, who did everything he could to replace Debret’s work with the more accurate reconstruction that exists today.[14]

Today, the Basilica of Saint-Denis is recognized as the very first example of Gothic art and architecture. Returned to the Catholic Church, it was officially granted the status of ‘cathedral’ in 1966. It is also the world’s largest museum of medieval and Renaissance statuary, home to over 70 pieces of funerary sculpture from the Twelfth to the Sixteenth Centuries.[15] Its northern tower may be gone, but its imaginative Gothic interiors continue to be admired by visitors who, in entering Saint-Denis, step into a turning point in architectural history itself. 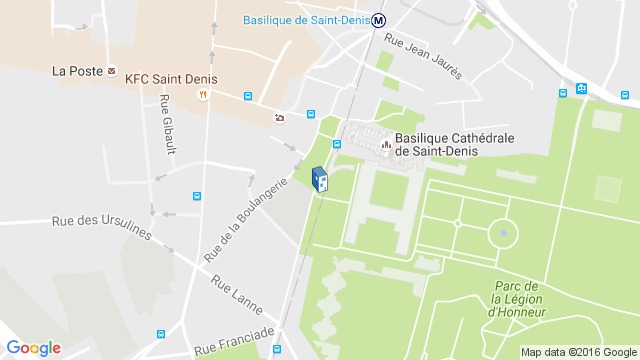