The winning project pays a lot of attention to the urban fabric of the city of Prato and to its extreme regularity: an orthogonal grid which, as a trace of the ‘cardo’ and the ‘decumano’ of the Roman grid, is still very persistent and is striking for its spatial and temporal diffusion. The project hence starts from the memory of the place and from its original urban forms to manipulate them, through abstraction. It enhances the historical city wall, it evokes traces of the Italian Renaissance gardens, organized according to perspectives, pergolas and hedges, and reinterprets them in a contemporary language. To the north of the site, the pavilion is a one-storey structure, open towards the park. Beside restaurants and other park-related facilities, it accommodates ample spaces for artists’ ateliers and temporary exhibitions.

In the words of the designers: “The park itself soars to the status of open-air museum. In the heart of the park contemporary sculptures are exhibited, along with a collection of plants that will be selected not merely for their botanical features, but also for their aesthetic qualities, their colors, their exuberance. Displayed in such manner, these natural elements will become art pieces themselves.”

The project for the new 3-hectare park consists of two functional lots. The first lot includes the complete creation of the green areas and therefore of the park, as well as a built volume with a minimum area of 500 square meter of gross floor area containing, among other things, the services essential to the park itself. The second functional lot includes the creation of other buildings, up to a maximum of 3,000 square meters of gross floor area.

For the city, the creation of the urban park in the former hospital area represents an exceptional and unrepeatable occasion. The new urban park must first of all be able to change the vision and perception not only of the new place that will be created, but it must also alter the perception of the downtown areas adjacent to it, conferring awareness that a new part of the city has been created inside the walls. We will not come upon an area closed off by walls and gates, but we will detect a prevalently open area capable of becoming a hub of vitality for the center and for the city outside the walls.

Along with the commission for the project, the winning team has been awarded an prize of 40.000 Euro. Each finalist will receive a reimbursement of 13.000 Euros.

OBR and Michel Desvigne Paysagiste will now work with the city to finalize plans for the new Parco Centrale di Prato. 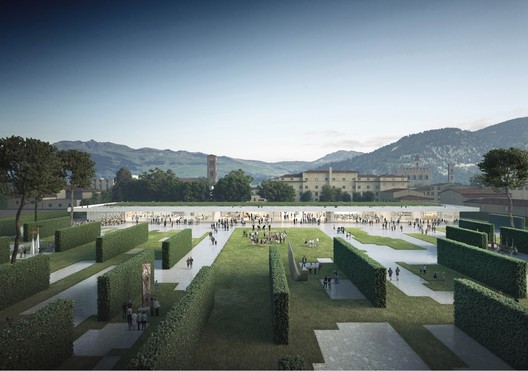